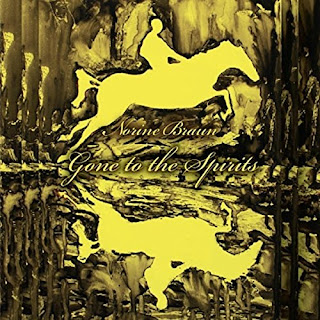 Norine Braun is a singer, guitarist and songwriter based in Vancouver, British Columbia. On her new album, Gone To The Spirits, she mixes folk, blues, jazz, rock, pop and even spoken word to tell the story of a Ktunaxa prophet and guide from the early nineteenth century. All of the songs are originals, written by Norine Braun. In addition to vocals and guitar, Norine plays Navajo flute and ukulele. She is joined by Adam Popowitz on bass and lead guitar, Elliot Polsky on drums, Huggybear Leonard on harmonica, Alice Fraser on keys and accordion, and Malcolm Aiken on trumpet and flugelhorn. I appreciate music that is able to transport us out of our normal reality and time, and this album does so almost immediately. Then the music takes us in some surprising directions.

The album opens with a short spoken word piece titled, simply, “Spoken Word One.” Interestingly, the opening line of this album is about the end, about her death: “Here it is, the moment of my death, she choked.” This track is the opening paragraph of a short story. That’s followed by “Morning Prayer,” a strange song that begins as a dark, somewhat ethereal-sounding folk song, with a horn adding intriguing touches over the steady acoustic guitar, then takes on a sort of dance beat, a strong fast pulse as it builds toward a bright climax.

I love the vocals on “Rock People (Yaqan Nukiy),” a song that begins like a sweet dream, a fantasy, a fairy tale (though I’m not quite sure what to make of a line like “Climb aboard into a sturgeon’s nose”). It’s followed by one of my favorites, “Coyote,” which has a delicious and very cool vibe. I dig the percussion and that simple and inviting bass line, and then when the electric guitar comes in, the song takes on something of a classic garage rock sound. Here is a taste of the lyrics: “Coyote calls/His wildness in dreams/How he dances beside a fast flowing stream/His coat is scruffy/With his ribs showing through/He’s a rogue and a clown/And he’s talking to you.” And Norine’s vocals are great. I just love this song.

Things get more jazzy with “Bird With A Song To Sing,” with its unusual and prominent rhythm and wonderful accents on horn. “I’m never frightened/Fallen once forever hooked/If you should hear me/I’ll lift you up high/I’m a little bird/With a song to sing.” It’s kind of an adorable song. Norine Braun then turns to the blues with “Gone-To-The-Spirits Blues.” There is some nice work on harmonica, and the track has a decidedly raw feel, like an old blues record – at least at first. Halfway through (right after the lines “You can call me what you want to/But I ain’t a woman no more”), the song gets a clearer, more immediate sound, but continues with the groove and with that great harmonica. Norine stays in a somewhat bluesy realm for “Kocomenepeca,” a song with a bit of surf rock guitar style that reminds me of the “James Bond Theme.” There is also a spoken word section partway through.

“Evening Song” has a magical quality right from the start, and it’s surprising when the band then kicks in and it takes on something of a rock feel. I really like the bass line, and of course the flute as well. This is one of my personal favorites. “Those who bring the sun cannot/Hide it from themselves.” “Evening Song” is followed by another very short spoken word piece, “Spoken Word Two.” And the CD concludes with Norine Braun reading the short story, “Ququnak Paǂkiy: Gone-To-The-Spirits.” We heard the beginning of this story on the CD’s first track, and its end on the thirteenth track. And listening to this story, I now understand the line about climbing aboard into a sturgeon’s nose. It is a kind of canoe. So there you have it.