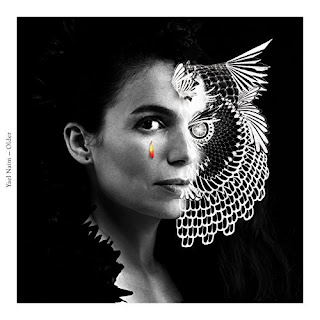 I listen to a lot of music, a lot of really good music. That’s the point of this blog, really, to let folks know that there is a whole lot of good music out there waiting to be heard. But sometimes I’ll hear a new song that just completely blows me away, that stands apart from the rest, that almost unnerves me in some way. Such was the case with “Coward” by Yael Naim. Once I heard it, I couldn’t get enough of it. I wanted to feast on that song. And then, of course, I wanted to hear more from her. Older, the CD which includes that song, is an excellent pop album showing Yael Naim’s strengths as both singer and songwriter. She wrote or co-wrote (with David Donatien) all of its tracks. Yael Naim was born in France and raised in Israel, and now lives in Paris. This disc was apparently released in France last year, and it has now been released here in the United States.

“I Walk Until,” the CD’s opening track, has something of a playful, youthful vibe. And as the song continues, it begins to feel like a celebration, perhaps a personal one. “I Walk Until” was written by Yael Naim and David Donatien, and on this track Yael Naim plays glockenspiel. It’s followed by “Make A Child,” a delightful pop song that also features glockenspiel. “You can make a child/But you’re going to have to undo/Everything you are/Everything you thought that you knew.” And when she hits those playful high notes, I can’t help but smile. And then there are those glorious backing vocals. Is there a better song about considering and entering parenthood? This music makes me feel so bloody good. This song was inspired by the birth of Yael and David’s child.

“Dream In My Head” has a more serious, somewhat haunting feel, and features an excellent vocal performance by Yael Naim. “I saw some children playing with guns/I can’t believe what we’ve become/And I found some letters, written by god/But they were signed with our own blood.” This is a song I love more each time I listen to it. Arnaud Thorette plays violin and viola. That is followed by “Coward,” the first song I heard from this album. It took a few moments, but once this song had hold of me, it wouldn’t let go. Nor did I want it to. It was the moment when the choir began to sing the word “coward,” part chastisement, part praise from angels, and completely unexpected and unusual, lifting her, enveloping her in wings and light and voice. I think I listened to this one song for nearly an hour straight, then craved to hear other songs from this amazing artist. This is an incredible song, easily one of the best of the year (though, actually, it was released last year, so let’s just say it’s one of the best songs of the last couple of years). It’s all vocals and piano, and is absolutely wonderful.

“Trapped” is pop with a tremendous amount of soul, and it is quite effective. It has a full sound, coming mainly from Yael Naim’s powerful vocals, but also from Clément Oury on tuba, François Bonhomme on French horn, and Arnaud Thorette on violin and viola. This is yet another strong track on this fantastic album. It’s followed by “Ima,” which is so pretty and delicate, like a child’s dream song. Part of it is sung in Hebrew and part in Creole (and yes, part in English). Leyla McCalla joins Yael on vocals, and also plays both banjo and cello (two instruments I love, but which rarely think of together).

“Walk Walk” then begins with a beat that includes handclaps, which comes as a surprise. This song is some strange, wonderful combination of 1960s pop and gospel, with a great bass line by David Donatien. “Take Me Down” has something of that style too. “Bring me back into the past/Just for making me belong to you/Bring me back into the dust/I no longer want to hate you, hate you.”

“Older,” the CD’s title track, is another amazing song, another of my favorites. It quietly commands your attention, with Yael Naim’s vocals accompanied by just acoustic guitar and piano. “I will follow you wherever you’re going/all those years are passing by/now that it’s over, still I’m/here beside you before you’re leaving.” Beautiful and sad. This CD then concludes with “Meme Iren Song,” a strange one in its presentation, for there is a lot of noise in the background, like it was recorded outside where people were going about their business. It creates a strange effect, for it’s like the song and the noise are of two different worlds or times, and both, as a result, feel fleeting. “’Cause now it’s time for you to go/You came here a long, long time ago/You told me not to be afraid of the storm/It only brings you back home.”

CD Track List
Older was released on September 2, 2016.
Posted by Michael Doherty at 1:30 AM