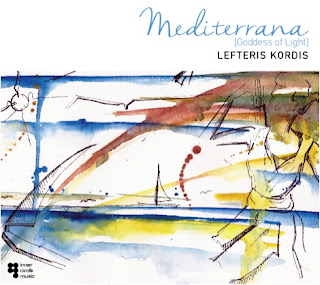 Lefteris Kordis is a pianist based in Boston (though born in Athens, Greece). His new release, Mediterrana (Goddess Of Light), is an interesting and at times beautiful journey, featuring mostly original material, with one exception. For this CD, the core is the trio of Koris on piano, Petros Klampanis on acoustic bass, and Ziv Ravitz on drums. Several guest musicians join them on various tracks.

The CD opens with “In The Land Of Phrygians,” a composition that Lefteris Kordis had recorded earlier and released on his Oh Raven If You Only Had Brains CD (it was the opening track on that disc as well). On this track, Lefteris Kordis plays synthesizer as well as piano, and is joined by Harris Lambrakis on ney, an instrument that plays a key part in this intriguing journey, even setting the tone at the very beginning. This piece can become dark and strange, then move swiftly to a place of beauty, like to a sudden paradise within a foreign land, and then on from there. Things become a bit wild toward the end, setting us at unease, mostly accomplished by Ziv Ravitz’s work on drums. From there, we go to “Yota,” which starts as a pretty, though somewhat dark and haunting piano piece. (And of course I can’t help but think, “Yota, you seek Yota,” but that’s really my own hang-up.) The bass and drums come in partway through, and at one point this track features a great bass lead by Petros Klampanis, with the piano and drums softly beneath it. But it is the gorgeous work on piano that really drives this piece.

“Mediterrana,” the CD’s title track, features some delicious, romantic playing by Vasilis Kostas on laouto. This tune becomes light, playful, joyful, a song of romance and some adventure. Roni Eytan adds some great work on harmonica, and Sergio Martinez Diaz joins on percussion, playing cajon on this track, and also adds those hand claps. This is one of my personal favorites. We all crave and perhaps need this kind of romance in some way, don’t we? That’s followed by “Deep Green,” which has a quiet, introspective vibe, like being alone in a clearing with one’s thoughts while starting to notice the surrounding world gradually coming more and more alive. Roni Eytan adds some nice touches on harmonica.

“The Raven And The Fox” is another composition that had been included on Oh Raven If You Only Had Brains. This version by the trio has something of a quirky nature that I really like. Vasilis Kostas again joins the group on laouto for “Journey With Pilgrims,” though his playing on this track has a very different feel from that on “Mediterrana.” And Roni Eytan is again on harmonica.

The one cover on this CD is The Beatles’ “And I Love Her,” a song from the band’s A Hard Day’s Night record. It begins with some great work on drums by Ziv Ravitz before it settles into the familiar theme on piano. This version goes in some interesting directions, and includes a good lead part on bass, without ever really abandoning its theme. The CD then concludes with “Nas,” a quieter, mellower piece. Roni Eytain is on harmonica (for just a moment, it sounds like he ventures into “Lara’s Theme” from Doctor Zhivago), and Alec Spiegelman joins the group on clarinet.