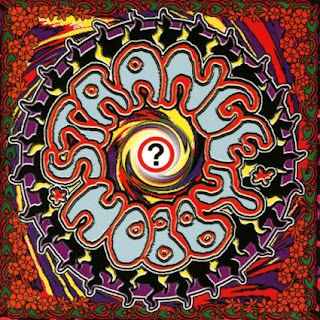 Arjen Anthony Lucassen is a Dutch musician known mainly for his combination of metal and progressive rock, especially for his project Ayreon. But in 1996 he recorded a collection of covers of 1960s pop and rock songs, releasing it under the title Strange Hobby, without his own name appearing on the cover. I hadn’t heard it upon its initial release, but am getting a chance to enjoy it now, thanks to a new, expanded edition, which includes four bonus tracks. In case you’re wondering, no, these aren’t over-the-top metal renditions. These are songs that Arjen Anthony Lucassen clearly loves, and so the hearts of the songs are still very present. There is both joy and respect for the originals in these recordings. The instruments aren’t allowed to overpower the songs, at least for the most part (they sort of do on Dylan’s “I Want You”). Arjen Anthony Lucassen plays all the instruments and provides all the vocals on this CD.

The album opens with Pink Floyd’s “Arnold Layne.” I am of the opinion that the only Pink Floyd worth listening to is the early Syd Barrett stuff, and you can’t get much earlier than “Arnold Layne,” which was the band’s first single, released in 1967 (it also appeared on Relics). This was written by Syd Barrett, and is about a poor transvestite who steals clothing from clothes lines. The first line of this song gives this album its name: “Arnold Layne had a strange hobby.” Arjen Anthony Lucassen’s rendition is certainly one of the heavier tracks on this disc. Lucassen also covers “See Emily Play,” another early Pink Floyd tune written by Syd Barrett (it was the band’s second single, and was also included on the U.S. edition of The Piper At The Gates Of Dawn).

Lucassen delivers a wild, heavy, yet groovy rendition of “Norwegian Wood (This Bird Has Flown)” (one of my favorite Beatles songs), here simply titled “Norwegian Wood.” He also does a version of The Beatles’ “For No One.”

One of my favorite tracks is Lucassen’s rendition of Status Quo’s “Pictures Of Matchstick Men.”  This track is just a whole lot of fun. It’s followed by Simon & Garfunkel’s “I Am A Rock,” and, as you might guess, this version is quite a bit different from the original, and yet it works quite well. These lines, in particular, have a different feel, their darkness emphasized: “I have no need of friendship/Friendship causes pain/It’s laughter and it’s loving I disdain.” And yet there is a joy to the approach.

Lucassen’s rendition of “Sunny Afternoon” begins like the Kinks’ version, but soon becomes heavier, with a fuller sound. I am a huge Kinks fan, and it took a while to get used to this rendition, but I ultimately appreciated what Lucassen does with it.

“Bus Stop” is one of the oddest choices on this album. I’m not sure if it works or not. I do really like the Hollies’ original version, but that worked in large part because it was cute and youthful, and here that feel is lost, so it kind of just seems strange. However, it’s followed by one that is absolutely delightful, a cool version of “Flowers In The Rain,” a song originally done by The Move. It was always kind of a quirky, fun tune, and Lucassen really embraces that, making this one of my favorite tracks. Lucassen’s version of “Sloop John B” is also a lot of fun.

The Monkees have been one of my favorite bands since my early childhood (I’m excited to see them in concert next week), and Arjen Lucassen’s version of “Daydream Believer” took me by surprise. From the brief intro, I didn’t recognize the song the first time I put on this disc, so when the vocals came in, I was caught off guard. And then I found myself smiling through the rest of the song. Yeah, this track is a total joy. The bonus tracks include another Monkees song, “Last Train To Clarksville,” and it is a tremendously fun rendition. I love what he does with that “didda-didda-didda-didda” part.

Perhaps the most unusual approach here is to Donovan’s “Catch The Wind” (probably my favorite Donovan song). Donovan himself has done this song several different ways over the years (check out his slow, full band version), and the song does lend itself to different interpretations. I’m not sure how I feel about this rendition, but it is certainly interesting. It’s also really short. It begins with some miscellaneous sounds, and an acoustic version of the song plays in the background, like on a record player while breakfast is being made or something. Then the song suddenly kicks in with a force. The original album then concludes with another Status Quo song, “Ice In the Sun.”

In addition to the two bonus tracks I already mentioned, there are two others. The first is actually an original Arjen Lucassen composition, “Pretty Girls.” While it is odd for this album to suddenly include one original number, it does fit, because it has something of a 1960s pop vibe. “Pretty girls are everywhere!” The other bonus track, which concludes the disc, is a cover of The Rolling Stones’ “Ruby Tuesday.” It’s a decent version, with a lot of energy, but I prefer renditions like that by Melanie Safka.

CD Track List
This special, expanded re-issue of Strange Hobby was released on July 16, 2016 on Aluca Music.
Posted by Michael Doherty at 5:58 PM