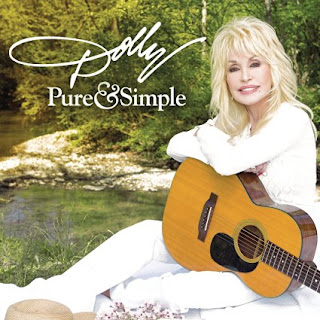 Dolly Parton, now 70, is still putting out really good albums. Her new release, Pure & Simple, features some sweet and straightforward country tunes, without unnecessary adornment. All of the CD’s songs were written by Dolly Parton, though a couple of tunes are older, with different versions appearing on earlier releases by Porter Wagoner And Dolly Parton. These are mostly love songs, touching upon various aspects of that ever-intriguing, ever-beguiling, ever-delighting emotion. On this CD she is joined on various tracks by Tom Rutledge on acoustic guitar and banjo, Jimmy Mattingly on mandolin and fiddle, Richard Dennison on piano, Paul Hollowell on piano and organ, Paul Franklin on steel guitar, Kent Wells on electric guitar, Kevin Grantt on upright bass, Steve Mackey on electric bass, Tom Hoey on drums, and Steve Turner on drums. She is also joined by several backing vocalists on certain tracks, and by a string quartet on the CD’s final track. But the focus here is clearly on Dolly’s vocals.

The album opens with its title track, “Pure And Simple,” a sweet love song with an easygoing vibe. “Every time I think about you/I get chills along my spine/It’s a feeling I’m not used to/Can’t believe you’re really mine.” It’s about finding that true love later in life. “Like a dream we finally found it/Pure and simple; well, good for us.” That line makes me smile every time. It’s a nice, positive song to set the tone for the CD. Jimmy Mattingly plays mandolin on this track. Richard Dennison and Monty Lane Allen provide backing vocals.

“Say Forever You’ll Be Mine” is one of the songs she recorded previously with Porter Wagoner. It was the title track to their 1975 LP, and was also released as a single. This new version is much simpler and more intimate, with just vocals, guitar and fiddle. It’s a beautiful love song.  “Darling I won’t promise you/That we’ll be happy all the time/But forever I am yours/Say forever you’ll be mine.” This version includes a spoken word section toward the end. She delivers part of “Never Not Love You” as breathy spoken word toward the end too. It is Tom Rutledge’s banjo that I most appreciate about that track.

On “Can’t Be That Wrong” Dolly delivers a different take on cheating, yearning for a lover and being plagued by “Torn Between Two Lovers” on the jukebox, while determining “Anything that feels this right can’t be that wrong.” This song contains a reference to the ten commandments and another biblical reference in the line “The spirit’s always willing, but the flesh is weak again.” Matthew 26:41 reads, “The spirit indeed is willing, but the flesh is weak.” In the following song, “Outside Your Door,” Dolly sings, “Might not be the right thing to do/But I swear it doesn’t feel wrong.” Though in this one she is not necessarily (or explicitly) cheating on someone, just visiting a man for sex, for passion.

“Tomorrow Is Forever” is the other song that Dolly recorded earlier with Porter Wagoner. It’s a gorgeous song. I first heard this one on a Grateful Dead concert tape. They covered it a few times in the 1970s, with Jerry Garcia singing it as a duet with Donna Jean Godchaux. I remember being surprised to learn the Grateful Dead covered Dolly Parton, but of course they covered a lot of great country artists over the years. This song has a slightly different feel now that we’re all a bit older. “I care not for yesterday/I love you as you are today/And yesterday just helped to pass the time while waiting/We must forget, we will in time/My love for you is the real kind.” Dolly’s vocals are wonderful, and I love Paul Franklin’s work on steel guitar on this rendition. This is one of my favorites.

She follows that one with a fun tune titled “I’m Sixteen,” about how love makes us feel young and often act young. “And I will be sixteen forever/Just as long as you love me.” This song even contains a Beach Boys reference: “We’ll go steady ‘til our daddy takes the T-Bird away.” And she laughs at herself a bit toward the end, asking if she looks sixteen and quickly saying you don’t have to answer that. Then “Head Over High Heels” is a delightful love song that raises my spirits and makes me smile each time I listen to it. “Have mercy on my soul, I’m losin’ control/Head over high heels and I can’t get enough.” The CD then concludes with “Forever Love,” a beautiful and moving love song that features a string quartet. David Davidson and David Angell play violin, Kristin Wilkinson is on viola, and Anthony LaMarchina is on cello. “You touch me; it’s like no one else ever touched me/Kiss me, and all other kisses just fade/No other arms come to mind when you hold me.” Ah, yes!

CD Track List
Pure & Simple was released on August 19, 2016 through Dolly Records and RCA.
Posted by Michael Doherty at 10:32 PM