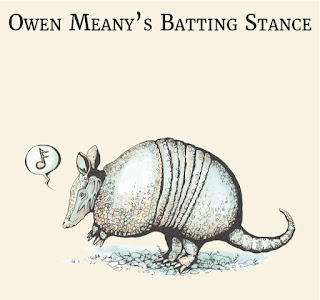 Honestly, I was interested in this disc because of the band’s name. John Irving is one of my favorite writers. Though I have to say A Prayer For Owen Meany is one of my least favorite books of his (though it’s better than A Son Of The Circus). I am much more fond of The Hotel New Hampshire, The World According To Garp, The Cider House Rules, A Widow For One Year, and Until I Find You. Anyway, in A Prayer For Owen Meany, Owen accidentally kills a woman with a foul ball. As John Irving writes about Owen Meany in the novel, “He was not a good baseball player, but he did have a very small strike zone.” So the band’s name is sort of like a preparation for death. And yes, that was certainly enough to catch my interest. Owen Meany’s Batting Stance is the project of singer, guitarist and songwriter Daniel Walker, along with Evan Matthews and Neal Reid. This self-titled CD is the band’s debut.

It opens with “Dissonance,” a kind of quirky, delightful tune with both pop and country elements combined to create something fun and original, with a steady groove and some humorous lyrics (“grasping for the top of Maslow’s hierarchy of needs/Self-actualization’s looking more like a pyramid scheme”). This song also features some nice work on electric guitar. Laura Jean Fraser and David Archibald provide some good backing vocals. By the way, A Prayer For Owen Meany is not the only John Irving book referred to here, as the lyrics to this song mention Trying To Save Piggy Sneed. Actually, this song has several references to books and films, including a reference to Timequake by Kurt Vonnegut, as well as references to The Usual Suspects and Angels In The Outfield.

That’s followed by “Charlotte’s Gossamer Awaits,” this title obviously a reference to Charlotte’s Web. This song too features some humorous lyrics. Check out these lines: “I was a tadpole who defied evolution/There’s a passive comfort in this leg-less state/And because underwater I am safe from the French delicatessen’s plate.” Wonderful, right? And then “The Goose, But More The Gaggle” is a great raw folk rock tune about less-than-ideal people who play in local bands, the song taking an unusual perspective. “You don’t excuse a person because they play a goddamn instrument.” What’s great is the song itself, with its steady, raw vibe, sounds like something by one of those local bands. This is one of my favorite tracks.

“Pop Odyssey: The First Person Narrative Of The Bottle Of Cola At A House Party” is exactly what its title promises. It’s a song from the perspective of a cola bottle that wishes it were at a child’s party instead of being mixed with alcohol at a young adults’ party. “After cake I’d be the favorite party piece/Their parents’ prohibition lifted at this annual commemorative feast.” And perhaps by the end, you’ll actually feel for this soda bottle.

Another literary reference occurs in “Growth,” a song that mentions Charles Dickens in one verse. This is a really good, mellow song. I love the line, “Now she’s the person that I hope I’ll get to know too well,” itself a play on earlier lines, “Scan the room for the people I don’t know too well” and “Spend my summers with the people I don’t know too well.” That’s one of the things that make this track stand out for me. The disc then concludes with “Winter Wednesdays,” a strange song about the adverse effects of a snow storm. I am definitely looking forward to hearing more from Owen Meany’s Batting Stance.

CD Track List
Owen Meany’s Batting Stance is scheduled to be released on September 16, 2016. (By the way, the armadillo on the CD cover is also a reference to A Prayer For Owen Meany, and an armadillo appears on the covers of several editions of that novel.)
Posted by Michael Doherty at 9:40 PM