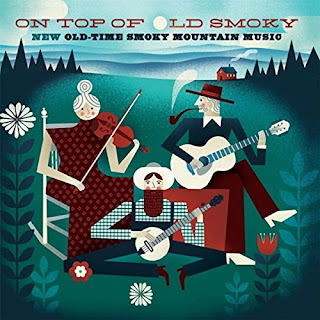 On Top Of Old Smoky: New Old-Time Smoky Mountain Music is an excellent collection of new recordings of some classic folk music from the Appalachian region. It features current artists, some of whom will undoubtedly be familiar to you and others whom you may not yet have heard of. This CD is put out by the Great Smoky Mountain Association, a non-profit organization dedicated to the preservation of the Great Smoky Mountains National Park. The liner notes to this remarkable collection tell the tale of the residents who had to leave their homes in order for the national park to be created, and of Joseph Sargent Hall, the man who went there to document the culture, speech and music of those inhabitants before they left. The liner notes also give a bit of information on each of the songs presented here, including the year that Hall made his recordings.

The album opens with Carol Elizabeth Jones singing “On Top Of Old Smoky.” Marley’s Ghost covered this song recently (though under the alternate title “The Unconstant Lover”), and in my review I mentioned how it’s impossible for me to hear it without thinking of the goofy parody version that we all heard as children. You know, the one about the lost meatball. I may forget people’s names, and have trouble recalling just what the hell I did last week, but I think that parody will be in my memory forever. Anyway, Carol Elizabeth Jones delivers a really good rendition of the real song, sung a cappella. Interestingly, that’s followed by “Come, All You Young Ladies,” a song which shares some of the same verses as “On Top Of Old Smoky.” Here it is presented as a pretty duet by Jody Stecher and Kate Brislin. Jody Stecher and Kate Brislin also deliver the fun “I Started Out A-Courting.” Jody’s vocal approach is delightful. “Every few minutes/It’s what’s your name/They laughed and they giggled/And they giggled ‘til they cried/I told them it was Jody/And they seemed satisfied.” Also fun is David Holt’s rendition of “The Girl I Love Don’t Pay Me No Mind,” a sweet and sad song about a girl who just doesn’t love the guy anymore.

This collection features several instrumental tracks. The first is “Lost Indian,” a delightful tune here recorded by Travis and Trevor Stuart. Trevor is on fiddle, and Travis is on banjo; they are joined by Jeff Keith on guitar. Tunes like this always remind me of the interesting connection of bluegrass with traditional Irish folk. Travis and Trevor Stuart also do “Black Mountain Rag.” “Bonaparte Retreat” is an interesting fiddle instrumental track performed by Bruce Greene. Stephen Wade performs a great instrumental rendition of “Black-Eyed Susie” on banjo, joined by Kalia Yeagle on fiddle and Roy Andrade on guitar. And Tony Trischka and Courtney Hartman perform “Chinquapin Hunting.”

“Ground Hog” is kind of a twisted children’s song about killing a ground hog and cutting it up. It’s followed by “Something’s Always Sure To Tickle Me,” a goofy, fun little number that I don’t recall ever hearing before. Of course, that doesn’t mean I haven’t; after all, my memory is selective and often faulty. Check out these lines: “Well, they asked me for the paddle, but it’s all in splinters now/For they wore it out tickling me.” What a nice, positive way to look at things! Corbin Hayslett seems to be having a great time with this song, and I like his work on banjo.

John Lilly sings two of the collection’s most famous songs, “Man Of Constant Sorrow” and “Mule Skinner Blues.” On “Man Of Constant Sorrow,” he is joined by Karl Smakula on mandolin. “Mule Skinner Blues” he performs solo, and even does a good bit of yodeling. Bryan Sutton performs “I Wonder How The Old Folks Are At Home,” one of my personal favorite tracks. Bryan is such a great guitarist, and this song always has an effect on me. By the way, some thought was certainly put into the ordering of these tracks, for a song in which the singer wonders about the people back home, we go to “The Ramshackle Shack,” a sweet tune about thinking about home and then finally returning home. This one is done by The Brother Boys. They also perform “Conversation With Death.”

It was the Grateful Dead that turned me on to “Goin’ Down The Road Feelin’ Bad” (though it was right around that time that I first saw the film version of The Grapes Of Wrath, which features this song, so maybe I heard it there first). The version on this CD by Amythyst Kiah with Roy Andrade, titled “Goin’ Down This Road Feelin’ Bad,” includes verses the Dead never did. I was always under the impression that Woody Guthrie wrote this song, but I don’t recall his versions having the “Who’s gonna stir that gravy when I’m gone” verse.

This entire disc is excellent, but one of my favorite tracks is “John Hardy” by Martin Simpson with Dom Flemons. This is a great rendition, with some impressive work on guitar, plus nice stuff on harmonica. You’ve likely heard a lot of versions of this tune, because there sure are a lot out there, but this one is particularly good and definitely worth hearing.

Another wonderful track is Dolly Parton’s version of “Little Rosewood Casket.” This is a song that Dolly Parton had recorded before, performing it with Emmylou Harris and Linda Ronstadt on Trio. This new rendition is a total delight. By the way, in case you didn’t know, Dolly Parton just released a new album. Yes, at age seventy, she is still going strong. This collection then concludes with a good version of “Will The Circle Be Unbroken” performed by Dale Jett and Hello Stranger.