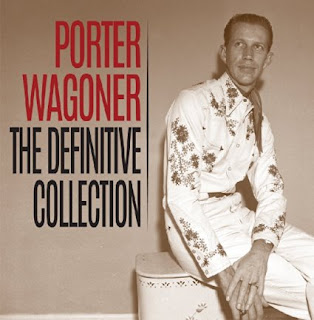 I’ve been enjoying the new Dolly Parton CD, Pure & Simple. On that album, she revisits two songs she originally recorded with Porter Wagoner. And listening to those tracks got me in the mood to go back to some more Porter Wagoner material. Well, guess what? Real Gone Music has just released a two-disc set titled The Definitive Collection, which contains forty tracks spanning the years 1953 to 1974. Most of these songs are from before his collaborations with Dolly Parton, with only a few tracks from the early 1970s.

The first disc opens with “Howdy Neighbor, Howdy,” a bright, happy tune from 1963 that features some wonderful work on fiddle. The CD then goes back to the 1950s, with “Trademark,” which has a more raw, loose sound. This song was co-written by Porter Wagoner, and in it he describes his trademark as: “A little bit of croonin’/A little bit of spoonin’/A little bit of swoonin’/And a lot of honeymoonin’/That’s my trademark.” He goes on to sing that he’s noted for his attempts to keep satisfying. Oh yes, and from what I can hear, he’s pretty damn successful at it. And from there this collection goes mostly in chronological order.

In 1954, Porter Wagoner had a #1 country hit with his excellent, passionate rendition of “A Satisfied Mind,” a song written by Joe Hayes and Jack Rhodes. His vocals sound great, and he’s joined by some good backing vocals on certain lines. “Money can't buy back/Your youth when you're old/Or a friend when you're lonely/Or a love that's grown cold.”

I could do without the Jesus song, “What Would You Do (If Jesus Came To Your House),” though a part of me keeps coming up with snide responses to that and other questions posed in the song. “If Jesus came to your house to spend a day or two/If he came unexpectedly, I wonder what you’d do.” Well, I really don’t like it when people show up uninvited, especially if they’re planning on spending the night. I think that’s incredibly rude. And as my friends can attest to, there’s hardly enough room for just one person in my home, never mind an uninvited guest. All right, enough about that. That song is followed by the great “Uncle Pen.” I’ve heard a lot of renditions of this song over the years, and this one still works its charm perfectly. It’s a lot of fun, and always makes me smile (and sometimes makes me dance around like a goof). Porter’s version of “Uncle Pen” reached #14 on the country chart. It’s followed by another of my favorites, “Tryin’ To Forget The Blues,” which reached #11 in 1956. Ah, some great country blues. “The song they’re singing makes me want to cry/’Cause it reminds me that you’ve gone and left me.” Then we get “A Good Time Was Had By All,” and with that fast banjo and fiddle, I don’t doubt that for a moment.

“Midnight” is a wonderfully sad and effective song. Ah yes, missing that special someone late at night, feeling lonely, midnight being an hour when you can’t turn to anyone else to alleviate the pain. ”I’m so lonely/So lonely at midnight for you.” And will the coming daylight help? Nope. “Tomorrow is on its way/Empty and blue.” This is another of the first disc’s highlights. I love those sad country songs. Like the delightfully depressing “Everything She Touches Gets The Blues,” in which he sings, “Wonder what she’ll name our baby/Someone else is helping her to choose/I only know my heart is broken/Everything she touches gets the blues.” Even better is “Cold Dark Waters,” another great depressing country song, this one dealing with lost love and suicide. His vocal delivery is perfect and heartbreaking. “I guess it all started the day we first met/You promised that you’d love me so/And I never thought it would end in regret/In the cold dark waters below.” This is one of my personal favorites.

The first disc closes with “I’ll Go Down Swinging,” with the excellent lines, “She thinks she made a fool of me by loving someone else/She should see me make a fool out of myself.” The second disc then opens in a fashion similar to the first disc, with “Y’all Come,” a happy, positive tune about neighbors coming to see you. It was clearly a deliberate choice to open both CDs this way, because both cases are deviations from the chronological order of tracks.

“Y’all Come” is followed by “Green, Green Grass Of Home,” a sweet song that was a big hit for Porter Wagoner, reaching #4 on the country chart. There is a spoken word section toward the end, and a spoken word section in “Skid Row Joe” too. That spoken word part of “Skid Row Joe” is actually my favorite section of the song. “But you see, this is my home/And you see the other bar down the street/Well, that’s my home too.” The spoken word part of “Confessions Of A Broken Man” is also wonderful. “I had a woman/Guess every man does/And every man thinks his is the best/Mine was/Stuck by me through thick and thin/’Til it just got too thin, I guess.”

“The First Mrs. Jones” is one of the highlights of the second disc. It was the lead-off track of his 1967 LP The Cold Hard Facts Of Life. Check out these lines: “Her real first name was Betty/But I’d rather just forget it/So I’ll call her the first Mrs. Jones/We were married in September/And it lasted ‘til November/Then one day she just took out on her own.” Like a lot of his recordings around this time, this track features a spoken word section, and in it he kills his wayward woman and we discover he’s telling the story to the second Mrs. Jones. Wonderful! Ah, the Julie of “Julie” is trouble too, and he tells us, “For she’d only laugh as she’d walk out the door/And each time she hurt me made me love her more.” And uh-oh, this one will end in death too. “Julie” reached #15 on the country chart.

“The Last One To Touch Me” is the only song in this collection written by Dolly Parton. Porter Wagoner released it as a single in 1970, and also included it on his 1971 record Simple As I Am. Dolly included her own version on her 1971 record Joshua. “The last thing I remember before I go to sleep/Is the touch of your sweet lips softly kissing me/And I go to sleep a-thinking how happy you make me/And I want you to be the last one to touch me.” Sweet, eh?

While the majority of the songs in this collection were written by other people, the final three tracks were all written by Porter Wagoner. “The Rubber Room” is an unusual and intriguing song, and Porter’s vocal delivery and approach are quite a bit different here. “Illusions in a twisted mind to save from self-destruction/It’s the rubber room.” And I dig the bass. This strange tune ends up being one of my favorites. “I hear footsteps pounding on the floor/God, I hope they don’t stop at my door.” “What Ain’t To Be, Just Might Happen” is a playful number that I also really like. “Highway Headin’ South” is also fun, and is one I’ll be adding to my road trip mix CD play list.

Disc One
Disc Two
The Definitive Collection was released on September 2, 2016 through Real Gone Music.
Posted by Michael Doherty at 8:22 PM