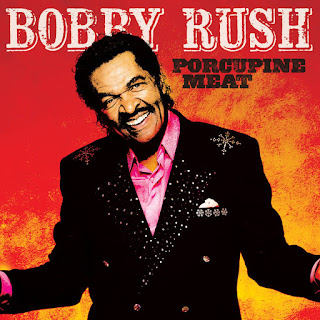 Bobby Rush is still going strong, and his new CD, Porcupine Meat, features some great blues tunes, many with a bit of a funky edge to them. The disc contains all original material, written or co-written by Bobby Rush. He is backed by a really good band (including Vasti Jackson on guitar, Shane Theriot on guitar, David Torkanowsky on keys, Cornell Williams on bass, Jeffrey Alexander on drums), and is joined by some special guests, including Keb’ Mo’ and Dave Alvin (Dave Alvin provides that guitar solo on “It’s Your Move”).

He gets things off to a great start with “I Don’t Want Nobody Hanging Around,” a delicious, funky blues tune about not trusting anyone at home with his wife. “Milkman, don’t bring no milk/Mailman, don’t bring no mail/Yard man, don’t call my home/I don’t want nobody while I’m gone.” Hell, some of the people he mentions later I wouldn’t want stopping by even if I were home (bill collectors, preachers). He even addresses the listeners, apparently not trusting us either. “That means you/You and you and you/Especially you.” And I love that horn section. Kirk Joseph is on sousaphone, Barney Floyd is on trumpet, Jeff Albert is on trombone, and Jeff Watkins is on saxophone.

Bobby Rush follows that with the CD’s title track, “Porcupine Meat,” in which he tells us, “I’m in love with a woman/She don’t mean me no good/I would leave that woman/If I could.” This is a kind of humorous, playful tune, and it features some nice harmonica work by Bobby Rush. Sure, there are some clichés: “If you play with fire, you’re bound to get burned” (of course, that line is put in the mouth of his mother, and motherly advice is often in the form of clichés, right?). This track features a lead guitar part by Vasti Jackson. “Got Me Accused” is a slower blues number, about one of those great blues subjects – being accused of a crime one is innocent of (and hey, that’s not his only trouble – “They got me accused of forgery/And I can’t even write my name”). I dig that sousaphone. And listen to that wonderful, plaintive harmonica lead. “Got Me Accused” was written by Bobby Rush and Scott Billington.

Things get fun and funky again with “Snake In The Grass,” a song which provides a warning about trusting people. Hmm, another song about lack of trust? Is everything okay, Bobby? “Boy, you’d better listen/Don’t you move too fast/’Cause when you’re not looking/You’ll find a snake in the grass.” “Snake In The Grass” was written by Bobby Rush, Scott Billington and Johnette Downing. He follows that with “Funk O’ De Funk,” a funky song about being funky. So there. “My music’s funky/As a Mississippi junky.” He then says, “Let me show you what I mean,” leading to a lead part on harmonica. Oh yes! This one also features a cool horn section: Kirk Joseph on sousaphone, Barney Floyd on trumpet, Jeff Albert on trombone, Khari Allen Lee on alto saxophone, Jeff Watkins on tenor saxophone and Roger Lewis on baritone saxophone.

The fun continues with “Catfish Stew,” with lines like “I got a taste of her catfish stew” and “You got the right fishing pole.” There is nothing too subtle about this one, eh?  “Catfish Stew” was written by Bobby Rush, Scott Billington and Johnette Downing. Yes, there are some interesting metaphors on this album; or is “Nighttime Gardener” really about late-night landscaping? It is a fun, bluesy rock tune in which he promises to be the right man to trim your bush, and it features Kep’ Mo’ on slide guitar. “Yes, I’m a nighttime gardener, girl, I’ll cut your yard to please/If I can’t do it standing up, I’ll even get down on my knees.”

In “It’s Your Move,” Bobby is excited by the shortness of a woman’s dress: “You kept on teasing me, girl, with the freaky little things you do/Wearing that short dress, ha, and the sun come shining through/You got me all worked up, girl, and I want to make love to you.” But then in “I Think Your Dress Is Too Short,” he re-thinks his position a bit, as now she is his woman, and he doesn’t want other men seeing the very thing that got him excited in the first place. Ah, there is that air of distrust again. “You walk down the street with your short dress on/Men be looking at you like a dog at a bone.” And then: “You’re my woman, I’m your man/Why, why, why you want to show everything?/I think your dress is too short.” It’s a cool tune, with more nice work on horns. And there is more great stuff on horns on “Standing On Shaky Ground,” particularly on saxophone. I also really like Cornell Williams’ work on bass on this track.

The disc then concludes with “I’m Tired,” a great folky blues number about being tired all the time.  I know the feeling. This is a song that Bobby Rush had recorded before, including it on his 2007 release, Raw. This new rendition, the “Tangle Eye Mix,” develops a good groove over which there is some great work on harmonica. This is one of my favorite tracks; it opens with a cool harmonica solo, and ends with him simply stating, “I’m tired.”

CD Track List
Porcupine Meat was released on September 16, 2016 on Rounder Records. This is his first album on Rounder.
Posted by Michael Doherty at 3:08 PM