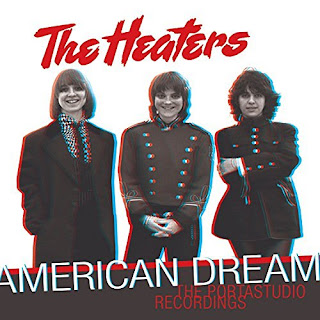 Remember The Heaters? Don’t feel bad if you don’t. Unless you lived in Los Angeles in the late 1970s and early 1980s, there’s a good chance you never heard them. I never did. Though they released two records back in the day, neither album did all that well. They then went a different route, and in 1983 recorded several tracks on a Portastudio at the house of the lead singer’s parents, but these weren’t released. Until now. Thanks to Omnivore Recordings, they are here as American Dream: The Portastudio Recordings, ten great tracks, many of which have a definite 1960s girl group flavor. But unlike a lot of those girl groups of the 1960s, these women play instruments in addition to delivering fantastic, delicious vocal performances; also, they wrote all the songs on this disc. The Heaters were made up of two sisters – Missy A. Connell and Maggie J. Connell – and lead vocalist Mercy Bermudez. Joining them on certain tracks are Steve Barbato and John Cowsill. The liner notes are written by Mercy, Maggie and Missy, and tell the story of how these tracks came to be.

The CD opens with its title track, “American Dream,” a cool garage pop tune that I got into immediately. Certain lines stood out for me the first time I put on this disc, lines like “Your smile looks like a brand new car,” “You’re not a machine,” “Your hair looks like an airport” (unless I’m mishearing that) and “I’ll never get over your electric windows.” Missy Connell wrote this one, and it’s a lot of fun. I like what Maggie Connell does on piano near the end. “All I Want To Do” then is a sweet, innocent-sounding love song in which they sing, “All I want to do is love you.” Check out these lines: “I don’t understand it/I heard such stories about romance/Do I come from a different planet/Oh, lucky stars, give me one more chance.” Oh, we’ve all felt like that at one time or another, right? This one was also written by Missy.

That’s followed by “10,000 Roses,” which is part 1960s girl vocal group, part punk, and is a total joy. “I need a rose umbrella.” Those backing vocals (“Wah-oo, wah-oo,” and so on) made me laugh out loud. And check out that guitar work. This one was written by Maggie Connell. And then with “Every Living Day,” also written by Maggie, they really nail that delicious kind of heartbreaker that the 1960s vocal groups did so well. And it’s a fantastic song, probably my favorite on this CD. Mercy delivers an incredible vocal performance, and the backing vocals are perfect. “Every living day/Brings us closer/Closer to the end.” There is certainly a humor to it as well, like when they sing, “No, no, no, yes, no.” This one features Steve Barato on guitar, and also includes one of those spoken word sections favored in many of those 1960s tunes: “And my very, very, very best friend/Every living day/Bring us closer and closer and closer/Closer to the end.”

“Sandy” is certainly an unusual song. It starts with a phone being dialed, a girl answering. And then the song kicks in. So it’s like the band, rather than talking to this girl, sings her their thoughts about the boy she’s been seeing. I hope if The Heaters ever have any advice for me, they’ll give me a call and sing it. “But that boy that you’ve been seeing/Doesn’t really care for you/He’s in love with his own feelings/He can’t see you/He wants to be you.” Yup, “That boy wants to be a girl.” I love this song. And the end is surprising and funny.

John Cowsill (from The Cowsills) joins the group on drums for the last several tracks, beginning with “I Want To Love Again.” That song opens with a bit of spoken word: “You know there’s a way to my heart/That no one’s ever found/I thought someone did one time.” They let it loose on “Rock This Place,” which has a strong rock and roll vibe. The CD ends on a sweeter note with “I’ll Meet You There.” “Never will never do/It’s only a word we say/When it’s hard times/We’re going through/Everything is possible/When love’s got a hold on you.” Mercy adds saxophone to this one.

CD Track List
American Dream: The Portastudio Recordings was released on August 19, 2016 through Omnivore Recordings.
Posted by Michael Doherty at 11:33 AM