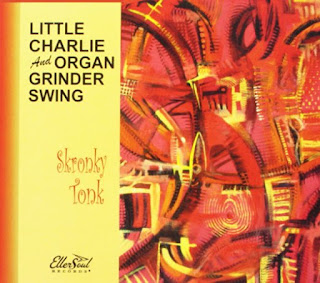 Little Charlie Baty is an incredibly talented guitarist, best known for his band Little Charlie And The Nightcats (which, after his departure, is known as Rick Estrin And The Nightcats). Now a couple of musicians from that band have joined him for his new jazz trio CD, Skronky Tonk, under the name Little Charlie And Organ Grinder Swing. Lorenzo Farrell is on organ (and also bass), and J. Hansen is on drums and percussion. (The three musicians are credited with producing the CD as well.) This is a cool album, mixing jazz swing and blues elements, and it features some original material by Charlie Baty in addition to well-known songs such as “How High The Moon” and “Misty.” The CD includes liner notes written by Charlie Baty.

The CD opens with an original number, its title track, “Skronky Tonk,” which is some groovy swingin’ blues featuring excellent guitar work by Charlie Baty. There is some cool stuff by Lorenzo Farrell on organ as well. Man, this tune has a wonderful, fun nighttime groove, which I could listen to for hours. It’s the kind of tune that would feel at home on the soundtrack to The Blues Brothers. It’s followed by a fun, joyful rendition of “How High The Moon,” played with a light, almost whimsical touch. I love what J. Hansen does on drums here, even before those great short solo bursts. This version moves along at a great clip, until the end, when it suddenly slows down, as if approaching the end of a railroad track. And we disembark in Brazil, for a really good version of Jacob Bittencourt’s “Receita de Samba.” I enjoy this entire CD, but this is one of my favorite tracks, with each of the three musicians shining throughout.

“Nuages” begins with a nice, sweet mellow groove, but as it’s a Django Reinhardt song, you can expect some impressive guitar playing (and you certainly get it here). Little Charlie And Organ Grinder Swing also cover John Lewis’ “Django,” written as a tribute to Django Reinhardt and originally recorded by the Modern Jazz Quartet.

“Gerontology” is another of the original compositions, written by Charlie Baty. The title is kind of funny, because this song is quite active, with a great swing. If getting old is like this song, then we’re all going to be just fine, no worries. I really like what J. Hansen does on drums here. The CD’s other composition by Charlie Baty is “Cobalt Blues,” which has a catchy groove and some wonderful work on organ. And of course there is plenty of great stuff on guitar. This is another to put a smile on your face.

“Swing To Bop” is another very cool track, written by guitarist Charlie Christian. There is a very brief drum solo near the end. Little Charlie And Organ Grinder Swing wrap up the album with a couple of well-known tunes – “Misty” and “Flying Home” (here titled “Flyin’ Home”). This is a fairly lively rendition of “Misty,” and the band grooves on it for a while. “Flyin’ Home” is a fun little tune, with some good playing, and though it never gets too wild, it should have you snapping and tapping by the end.

CD Track List
Skronky Tonk was released on May 20, 2016 on Eller Soul Records.
Posted by Michael Doherty at 4:16 PM