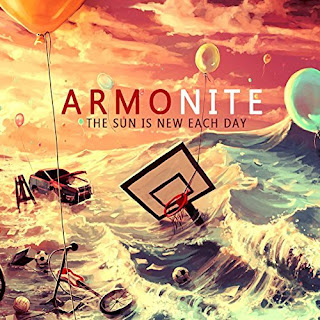 Armonite is an unusual band, created by two guys – Paolo Fosso on keyboard and Jacopo Bigi on violin. They are classically trained, and you can hear that experience and knowledge in their playing, but the music they choose to do is quite a bit different, more in the progressive rock realm. Joining them is Colin Edwin (from Porcupine Tree) on bass and Jasper Barendregt on drums. There is something of a worldly sound here, which makes sense as two of the musicians are from Italy, one from England and one from The Netherlands. The tracks were recorded in Italy, but mixed and mastered in the UK. The tracks are basically all instrumentals, though one tune contains a short spoken word section.

The CD opens with “Suitcase War,” a really interesting tune. It is progressive rock, but with the lead instrument being electric violin. Sure, it does get a bit heavy at times, with some great work on bass, but also has a lighter spirit at moments, which I appreciate. And toward the end it becomes playful in its sound, and actually kind of groovy. It is that section that I especially enjoy. That’s followed by “Connect Four,” which begins with a more electronic sound. The title of course makes me think of that game we played as children (I was thinking of this game anyway because the other day at work there appeared as a piece of set dressing a giant version of the game, coming up to my waist). The sound of this song is at first much more serious than something you’d connect with a children’s game, a sound that sort of catches you in a whirl, for a just a moment reminding me of slot machines at Las Vegas, as you might take them in from the distance of the entrance to the casino. And it does return to that intense realm toward the end, but in the middle there is a kind of joyful excitement.

“‘G’ As In Gears” is the track with the spoken word section. “He goes to sleep and dreams of work. He rises in the morning to go to work. He takes his frugal lunch to work. He comes home again to throw himself down on a miserable apology for a bed so that he can get that little rest that he may be able to go to work again.” That’s from a speech given by Samuel Gompers, the first president of the American Federation of Labor. Near the beginning, the tune itself sounds like work in a factory, though with a bit of a fun rather than just drudgery. But it breaks through to other levels, while still having a sort of clockwork thing about it. This one really creates a vivid atmosphere. The song begins where it ends, much like the day of a working person.

The album then takes us on a journey to Morocco with “Sandstorm,” one of my favorite tracks. I love the percussion which opens the track and which in some ways dominates the tune. It has a really fun ending too, which reminds me of the discotheque in Cairo where I once spent a bit of time. Things get a bit darker with “Slippery Slope,” a somewhat haunting and intriguing track that features Marcello Rosa on cello. “Satellites” seems to venture into ELO territory for a moment (around the 2:15 mark), then relaxes into a pretty violin solo, which soon gains a drum beat beneath it. It’s interesting how many little changes this tune goes through, never settling into one thing for very long.

“Die Grauen Herren” is an odd tune which also goes through several changes, at one point suddenly presenting a strange carnival laugh, like we’re about to be taken on a slightly dangerous ride. Marcello Rosa joins the band on cello again for this track. “Le temps qui fait ta rose” is a mellower, more thoughtful journey inward. The CD then concludes with “Insert Coin,” which has a more playful electronic sound, including video game sounds. Hey, does it remind you a bit of Grieg’s “In The Hall Of The Mountain King” at one point? Maybe it’s just me.

CD Track List
The Sun Is New Each Day was released on June 8, 2015, and is available for free on the band’s website. How about that?
Posted by Michael Doherty at 12:42 AM