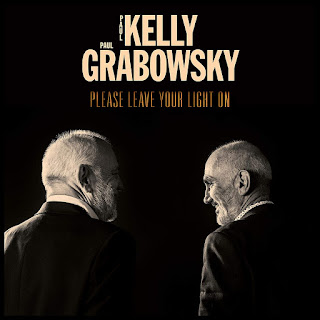 Singer and songwriter Paul Kelly has certainly kept busy during this crazy and unsettling time of the pandemic, offering solo performances and some new songs to his fans online, and thus helping us all get through it. The new recordings even resulted in an album titled Forty Days, an online-only release. He has also finished a project with jazz pianist Paul Grabowsky, songs that were recorded last August. Most of the material they tackled on the album, Please Leave Your Light On, is not new, but has quite a different sound from the earlier recordings due their approach. These tracks feature just vocals and piano (along with harmonica on a couple of them). No other musicians support them on this release. And so the songs have a beautiful and intimate quality and sound. Paul Kelly, one of the world’s most talented songwriters, never ceases to surprise and impress me.

The album opens with “True To You,” the only original song on it that had not previously been included on any of Paul Kelly’s releases, and right away we get a sense of the way that delicious jazzy work on the piano is going to play a prominent role, guiding the path the music takes. And as you’d expect, the song features lyrics that speak to us, that connect with us: “But our love will live through the hurt and the hate and the hurricane/Just like the Parthenon/Under the stars and sun/We’ll keep on keeping on/Because I’m true to you.” There is a very cool piano solo too.  That’s followed by “Petrichor,” a song that was originally included on Paul Kelly’s 2017 album Life Is Fine. There is a wonderful and beautiful intimacy to this performance, to this rendition, giving it a stronger sense of honesty. “I don’t need you/I don’t need you/I don’t need you/But I sure want you.” And then at one point toward the end he basically whispers “I don’t need you.” It’s effective and moving. I love this approach to this song, and this version has a stronger impact than the original rendition.

Then in “When A Woman Loves A Man,” there is something romantic about the piano work right from the start, and it brings to mind a warmth, a large chair on which you cuddle with your love beneath a blanket, looking out at the night while she sleeps. Is there anything more wonderful than that? That’s what this track feels like. The original version of this song was included on Spring And Fall, an album of love songs released in 2012. They follow that with a different take on William Shakespeare’s “Sonnet 138.” In 2016, Paul Kelly released an CD of Shakespeare’s work titled Seven Sonnets & A Song, and this sonnet was chosen as the lead track. That recording of it had a cool, jazzy and totally delicious groove. On this new album, he somehow delivers an even cooler rendition. Seriously, this one really surprised me. It comes on strong, with a sort of sly vibe. That piano work is so damn good.  I love how Shakespeare’s words can still sound completely new to us, no matter how many times we’ve heard them before. “Oh, I lie with her and she lies with me/In our faults by lies we flattered be.” Absolutely fantastic. That’s followed by another song from Spring And Fall, “Time And Tide,” perhaps that album’s best song. This new version begins gently, almost sweetly on piano, then takes on the song’s groove just as Paul Kelly’s vocals come in. This is a beautiful rendition. I’d like to hear more of Paul Kelly’s work performed in this manner.

Another of my favorites is “Young Lovers,” a song that was included on Paul Kelly’s double album Ways & Means. It is a delightful and playful song, and this rendition works perfectly. You can almost see Paul Kelly’s smile as he sings. As on the original version, he delivers a certain section as spoken word, but here it has a different vibe, and you can imagine him in a small jazz club playing to a small, appreciative and thoroughly inebriated crowd. “Young lovers, they don’t have very long.” That’s followed by a cover of Cole Porter’s “Every Time We Say Goodbye,” a song that of course feels right at home on this album. It’s wonderful hearing Paul Kelly tackle this standard. He and Paul Grabowsky deliver a rendition that is beautiful and gentle and sweet. Then, “Please Leave Your Light On,” the song chosen as the title track for this release, begins with some pretty, almost delicate work on piano. Paul Kelly’s vocal performance is passionate and heartfelt, one of the best of this album. “Don’t give up on me just yet/Well, I got no excuses for you/But I sure got some regrets.” And he repeats that line, “I sure got some regrets.” This is such a moving rendition. It would be difficult to remain aloof and unaffected, particularly when he sings these lines: “Please go easy when you see me, mama/‘Cause I just might fall apart/I know I’ve tried your patience/I know I’ve stretched your heart.”

“You Can Put Your Shoes Under My Bed” is a song from early in Paul Kelly’s career, included on his 1985 album Post, where it features saxophone. A different version, with harmonica, was included on Goin’ Your Way, the 2013 release from Neil Finn and Paul Kelly. This new version also features some sweet work by Paul Kelly on harmonica. It’s a beautiful track. And don’t we all long to hear someone tell us “You can put your shoes under my bed/Anytime, anytime you’re passing by this way/Remember, you will always have a place to stay”? To know that we have a place in the world, that we have someone who will take us in? That’s followed by “Winter Coat,” a song from Comedy, a 1991 album from Paul Kelly And The Messengers. The sense of the past is so strong in this new rendition. I can feel the chill when he sings “up in these cold, cold hills,” and Paul Grabowsky’s work on piano seems to add to that chill. There is also a lonesome feel to this track, that sense of being warmed by a coat, by an object, rather than by a person. Then there is something delightfully cool about this rendition of “God’s Grandeur,” quite a bit different from the version included on Paul Kelly’s 2018 album Nature. It made me smile the moment it began. The album concludes with “If I Could Start Today Again,” a song from …Nothing But A Dream, which was released in 2001. On this new rendition, the heartache is almost palpable, as is the regret. You just want to hold out your hand to him. The line “Please give me back today” has me nearly in tears, and that is before that harmonica begins to blow mournfully. This is another highlight of the album.