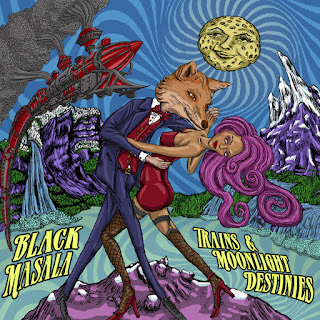 Black Masala is fantastic rocking brass band featuring both male and female vocals and a great energy. These guys are based in Washington D.C., and it’s comforting to know there is at least something good coming out of the capital these days. In 2018, the band released Trains & Moonlight Destinies, an album featuring mostly original material, much of it composed by drummer and vocalist Mike Ounallah, music that is tremendous fun.

The album opens with its title track, “Trains And Moonlight Destinies,” and it is just exactly what we need, music that blasts through all the bullshit, with pizzazz and a sense of style,  a song that commands us to get off our asses and onto the dance floor, which of course is any floor you happen to be near. It features a steady beat and some wonderful work from the horn section, along with great energy to Mike Ounallah’s vocals. Mike also wrote this one. “Yeah, oh yeah, she dances through the night/Her voice sings to me through a tunnel of light/Far away, away with this vagabond soul/World keeps a spinnin’ and she won’t, she won’t let me go.” This music is great fun, and at the end you’ll be shouting “Hey!” With all the great work from the horns and the rhythm section, I was surprised to then also be treated to an excellent lead on guitar toward the end. That’s followed by “Midnight Bhangra,” also written by Mike Ounallah. This one has a bit of a moodier intro, though still with a steady, if slower beat, and it soon begins to build from there. Here the percussion is what grabs us, as the music begins to work its charms, summoning us out of our baskets or wherever the hell it is we’re hiding. Then there is a sort of break when the vocals come in to allow us to focus on them, an interesting vocal performance by Kristen Long, one that mesmerizes us. And there are more shouts of “Hey!” And hey, why not?  I love that instrumental section, pulling us through some strange artery that is at the center of the real world, which we are just now beginning to get a sense of. I mean, all that other stuff that we’ve been dealing with is just illusion and artifice, something to occupy our attention, but here – this music – is the real thing. Plus, it’s sexy and exciting. “This time I will see through the walls staring back at me/Midnight comes and lays its head upon a mirrored room/You reach out to grab a glimpse, but it all fades away so soon.”

“Above The Clouds” has a catchy and funky groove right from the start, and the horns add to the joy. A good brass section is just the thing to drive the blues away – the blues, the greys – and replace them with brighter colors. This fun number was composed by saxophone player Brendan Schnabel, who delivers something we can all dance to. I love that sousaphone, playfully holding it all together. And we get a very cool lead on saxophone as well. That’s followed by “Tell Me Again,” a track that gets me smiling immediately with that beat. I love its vibe, and again that sousaphone. This is like a quirky march through a fanciful and glorious land of dancers and contortionists. Then we settle down, to focus in on Kristen’s vocals. “Many nights we’d dance under the moon/It’s getting late, won’t you please come home soon.” But the dance continues, and we are all invited to take part. This is one of my personal favorites. “Oh, won’t you tell me again and again.” And the electric guitar responds. “Tell Me Again” was written by Mike Ounallah and Kristen Long.The band dips more into a reggae realm with “Empty Bottles,” then drives forward from there. “One more day, just a little more to go/Hope that I can find my own way home.” (That line “find my own way home” reminds me of Robert Hunter’s “Liberty.”) This one that just gets better and better.

Then, when you think things have already reached their peak, the band takes us down to New Orleans with “Whatcha Gonna Do,” a ridiculously fun number that is guaranteed to get you dancing and smiling and forgetting about whatever troubles might be pestering you. “Come a little closer, don’t you hesitate.” The energy is so high here that this track seems like the album’s big finish, but there are still two more tracks to go. Oo-wee! “Whatcha Gonna Do” is followed by “Big Man,” written by trombone player Kirsten Warfield. The energy remains high, and the horns have a whole lot to say here. “There’s power in my pen/To write this story’s end.” Indeed! Yes, it’s an empowering number. The album concludes with “Chaje Shukarije,” the disc’s only cover. It was written by Esma Redzepova. The band does a beautiful and lively rendition. On the back of the CD case, a ninth track is listed, that being a different rendition of “Above The Clouds,” but my copy doesn’t contain that track.

CD Track List
Trains & Moonlight Destinies was released on October 5, 2018.
Posted by Michael Doherty at 7:36 AM