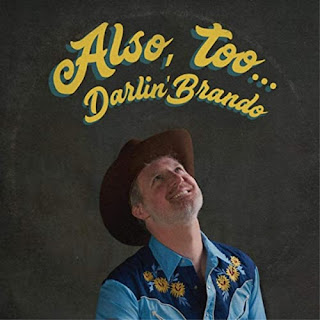 Darlin’ Brando is the project of Brandon Goldstein, a singer and songwriter and drummer based in Los Angeles. On his new album, Also, Too…, he delivers eight original songs, and is backed on most tracks by The Streise Bar Band, which is made up of Brian Clements on acoustic guitar and backing vocals, Adam Kurtz on pedal steel, Jeff Malinowski on bass, and Storm Rhode IV on electric guitar and nylon string guitar. A.J. Croce joins Darlin’ Brando on one track, and Edith Freni also provides some excellent vocal work on this album.

The album opens with “When You Don’t Fight,” written by Brandon Goldstein and Edith Freni. This track has a delicious country sound, including pedal steel. But the song’s opening lines are what get me into it. Here they are: “Loving is easy for a lot of folks/But when it comes to fighting, they’ll avoid it at any cost/Afraid that airing their grievances/Will subject their blissful romance to an early winter frost.” And then there is a play on the phrase “public displays of affection,” with Edith singing “Public displays of contention get a bad rap.” Yes, this song is a wonderful, twisted duet, and it reminds me of a rather unstable woman I once dated. She believed that fighting was a sign of passion and worried that we didn’t fight enough. As you can imagine, it was a lot of fun. But this song really is a lot of fun. “It’s not about who’s wrong or who’s right/How are you going to make ‘em see the light if you don’t fight?” It also has a playful ending. That’s followed by “Those Old Demons,” also written by Brandon Goldstein and Edith Freni. This one has a sweeter country vibe, in which Brandon likens himself to a cat, “happy just to curl up on her floor.” Edith Freni sings lead on the second verse, “When I moved back to town/They said that my old friend was in a bad place/I’m not the same person I was when I got out/And I’m afraid to see my old self in his face.” It is a look back, and there is a fight mentioned in this song’s lyrics too, but a different sort of fight: “Now those old demons are the demons that I still fight.”

“Therapy” is one of my personal favorites, in part because of that steady groove, and in part because of its lyrics. “So I reluctantly agreed to get some help for my brain/Oh therapy, you’re scaring me/They say that you’ll take care of me/But oh therapy, you’re scaring me/Only one month in and four whole sessions down/My strength is giving way, I don’t like where I’m bound.” Ah the terror of facing one’s own self. And does it change us? There is humor to this song, which comes from the song’s honesty. And who these days hasn’t considered that he or she might need therapy? Of course, during these days of isolation and social distancing, therapy is out of the question. Ah, we are on our own. This track features an excellent vocal performance, and more good work on pedal steel. Then in “Weeds & Flowers,” Brandon creates a vivid character, a woman you will feel you know before the song has been on too long, if you don’t already know her. “She’s most at home without a home/She’s not the kind of girl that nice boys take home to their mothers/Then again, she don’t like nice boys/She burns bridges like it’s a job that pays her well.” It ends up being a rather sweet song, with the main line being “It’s the weeds that make the most beautiful flowers.” This is one of two tracks to not feature The Streise Bar Band. Instead, Ryan Payton joins Darlin’ Brando on acoustic guitar, bass, pedal steel, mandolin and backing vocals.

“Crumbling Marriages” is a more upbeat number about divorce and disastrous relationships, shown in contrast to the relationship of the people delivering the observations. “But somehow we always find a way to make amends/We don’t play the silly, hurtful games of our friends.” That’s followed by “Last Call,” a lively country number about drinking, featuring some great stuff on piano. That’s A.J. Croce on piano, and his presence adds quite a lot to this track. And yes, it is certainly time to drink with abandon. And hell, if you know the bartender, line ‘em up, I am ready and eager. “With the first one down, I went straight for the other.”

These days we have to explain ourselves, don’t we? For folks seem ready to find offense in all sorts of words and phrases. Well, in this song Darlin’ Brando plays with that idea near the beginning, in the lines “I said, you’re right, I can’t believe that you are all mine/And I don’t mean in that possessive kind of way/And if I do, then you possess me just the same.” This one has a cheerful sound which I appreciate. “When you smile, I see things differently.” Oh yes, I know that feeling. This is a love song you can believe in. The album then ends with “The Old Man And The Kid,” a moving folk song about two men who meet at a bar, a crossroads of sorts, told from the perspective of the older guy. He offers some advice to the younger man, telling him: “Out smack in the middle of nowhere/I know life can seem unfair/There ain’t much out there that’s better than right here/So just enjoy that ice-cold beer.” This is the other track to feature Ryan Payton instead of The Streise Bar Band. I love the line “Well, we’re all a little lost, and few will be found.” Sounds just about right.