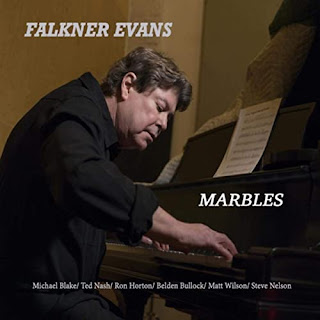 There was always something pleasing about marbles, about the texture of the glass, as well as the look of them. Each seemed like its own little world, with great splashes of color and twists and turns like a magical road within the small globe. And that is the sense I get when listening to jazz pianist Falkner Evans’ new album, Marbles, each song its own little world, contained within a structure, yes, but pleasing, and with plenty to enjoy and explore. The album features mostly original material, composed by Falkner Evans. Joining the pianist on this release are Michael Blake on tenor saxophone and soprano saxophone; Ted Nash on alto saxophone, clarinet and flute; Ron Horton on trumpet and flugelhorn; Beldon Bullock on bass; and Matt Wilson on drums.

On the album’s opening track, “Pina,” the drums at times have something of the feel of a march, and yet the horns have an easy-going sound, like sunlight entering a room, but a sentient sunlight, a light that wants to play with us, to sway with us, to dance with us. Then Falkner Evans’ lead on piano has both a gentle and excited vibe, as if discovering a way to communicate with the sunlight, to be on even footing with it in some sense. It puts me at ease and sounds distinctly of possibilities opening up. Then “Civilization” opens with a feeling of curiosity before settling into a rather pleasant groove. When you think of civilization these days, you probably get mixed feelings. After all, what has become lately of our government, of human interaction and camaraderie? But here we begin in a place that embodies a certain optimism, and features a cool bass line. The horn announces some progress, and the positive feel persists, a sense of working together, of cooperation. Falkner’s work has a warmth to it during his lead, and I feel good about this civilization’s chances.

“Sing Alone” begins with some lonesome work on piano. Beautiful, but isolated. A voice in the dark, perhaps. And so it tries to create a fuller sound, wishing to be more than one voice, to help fill the void. Then, after nearly two minutes, the other instruments join the piano, and there is a more comforting feel to the piece, which is even sweet and romantic at times. A bass lead emerges toward the end. That is followed by “Global News.” I find the news of the last four years – both global and local – to be equal parts distressing and infuriating. When this track begins, there is a sense of urgency, but it is not overwhelming. We can handle it. Still, it drives us forward, doesn’t it? As if we must read on, must learn more, the music feeling like the turning of the pages of a newspaper. Then a certain story really captivates us, grabbing our complete focus, presented as a lead by one of the musicians. There are different stories, of course, and so different leads, different sounds, different tempos, different grooves, as we try to keep up and make sense of a world whose various parts we desperately wish to bring together, to make work as a whole so that we can understand and deal with it. The music takes us in a different direction with “Hidden Gem,” which has kind of a delightful and inviting groove, bidding us to enter a possibly magical and sweet realm. Some familiar sounds make our entry easy. There is no hesitation, or at least very little. And when we are inside, it isn’t long before we ourselves are at home at, and perhaps even a part of, that realm. The vibes (that’s Steve Nelson joining the group on vibes) are a strong part of that sense of another world, and that welcoming. Falkner’s work on piano again has a warm sense, but soon it expects you to acclimate yourself. And everything seems just right, and also fun.

There is an interesting sense of movement at the start of “This From That,” and while it settles into a cool groove, there is always just a bit of an edge, something to keep you on your toes, not entirely sure which direction it will take you. And there is some exciting, expressive and tremendous work from the brass section. That’s followed by “Mbegu,” which has a cheerful and playful feel, and becomes something of a wonderful ride with a great groove. And I love how near the end that groove becomes more insistent. Steve Nelson returns on vibes for “Marbles,” the album’s title track. This one, in large part because of that beat, takes us to a different place, a different civilization, where some kind of dance, some kind of ritual is taking place, where the voices of youth and wisdom mix. Soon one voice soon becomes prominent, directing the action, offering its thoughts both to the depths of the earth and the heights of the heavens. This is an exciting and completely delicious track. I particularly love that work on drums. And of course there is some absolutely wonderful work on piano. At one point, does that piano work remind you just a bit of the beginning of Vince Guaraldi’s “Linus And Lucy”? Then the count-off at the beginning of “Dear West Village” gets us ready for a track that will swing and move. The brass section offers us some more bright and joyful work. There is a sense of a better future in this music, and not a future that is too far off, but one right around the corner. All we have to do is move toward it, urged on by the music. Marbles concludes with its only cover, a lively rendition of “Things Ain’t What They Used To Be” that fades in like the action is already in progress, like we are just catching the tail end of it. The track is only like a minute and a half long, but it is fun and includes Steve Nelson on vibes. A track to raise our spirits. There is a bit of studio banter at the end.