The Duprees: “The Coed Albums: You Belong To Me/Have You Heard” (2020) CD Review 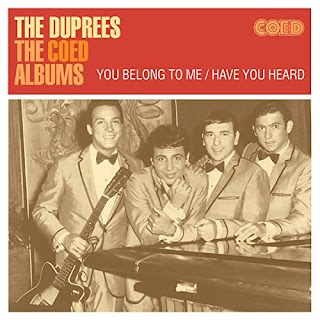 More and more I am looking for some form of escape from the horror this country has become. I’ve been taking refuge in music, often in the music of the past. Omnivore Recordings has helped out by releasing a series of discs celebrating the music from the Coed Records label, some wonderful doo-wop and pop music from the late 1950s and early 1960s. The Coed Albums: You Belong To Me/Have You Heard contains two complete albums from The Duprees, a group that formed in New Jersey in the early 1960s and had several singles chart on the Billboard Hot 100, including their version of “You Belong To Me.” This collection includes liner notes by Bill Dahl, detailing some of the history of The Duprees.

You Belong To Me

The first of the two albums the group recorded for Coed Records opens with its title track, “You Belong To Me,” a song written by Pee Wee King, Redd Stewart and Chilton Price. It had been a hit for Jo Stafford, though the version that often gets in my head is that by Bob Dylan, which was featured in the movie Natural Born Killers. This rendition by The Duprees is excellent. It was released as a single and became a hit for the group, reaching #7 on the Billboard chart. Something about this song never fails to move me, and it immediately pulls me from my surroundings. The lyrics mention other places – the pyramids, Algiers, the jungle – and though it’s the person he’s singing to that is in those places, I often feel when listening that I am in some far-off place. And now that is more appealing than ever before. The last line is delivered a cappella. This song is also included on The Duprees’ The Coed Singles, another of the special collections being released through Omnivore Recordings. That’s followed by “Ginny,” a love song featuring some good vocal work. “Oh Ginny, I didn’t mean it/Oh Ginny, don’t you know I was jealous, so jealous.” This song makes me think of Samantha’s older sister in the movie Sixteen Candles. I love the classical style to the group’s music, particularly in a song like “Why Don’t You Believe Me.”

“September In The Rain” opens with some great vocal work. Then when it kicks in, this track has a playful style and a cheerful vibe. This delightful song also features a nice lead on saxophone. This is one of my personal favorites. It was written by Harry Warren and Al Dubin. That’s followed by “Take Me As I Am,” which begins with a declaration of love: “Yes, it’s you/Yes, it’s you/And I will always love you.” He then admits, “I’m not perfect, as you can plainly see,” leaving it up to the woman whether he’s good enough for her. But if so, she must take him as he is. Oh, but will she take him and then try to change him? Somehow I have faith things will work out. After all, this is an early 1960s love song.

I have never seen Gone With The Wind, though my curiosity about the film has grown a bit in recent days because of its suddenly becoming newsworthy again. Anyway, The Duprees cover “My Own True Love,” which comes from a piece of music from Gone With The Wind titled “Tara’s Theme.” It’s a good song, and this version became a hit, reaching #13 on the pop chart in 1962. They then deliver a somewhat fast rendition of “As Time Goes By.” This is a song that I love, one that I usually lose myself within. This version is a bit too fast to really have that effect, but it is still rather pleasant. “These Foolish Things (Remind Me Of You)” is a standard that lists various things that make him think of a specific woman who still clearly commands his affection. The first album concludes with a fun number, “I Wish I Could Believe You.” This one is a total delight, in part because of that great stuff from the bass vocalist, and also because of that sax lead. This is another of my favorite tracks.

The second album, Have You Heard, was originally released in 1963. It opens with “(It’s No) Sin,” which is interesting title, what with the parenthetical section turning the song from Sin to No Sin. Anyway, it’s a sweet-sounding number, and was a hit for The Four Aces. This version by The Duprees didn’t chart nearly as well as that earlier version, but is still quite good. “Though you take away my heart, dear/Still the beating’s there within/I’ll keep you loving you forever/For it’s no sin.” That’s followed by “I’d Rather Be Here In Your Arms,” which has something of a country vibe. It’s a bit goofy, but enjoyable. “I’ve been to the cliffs of Dover/And found as I looked them over/That I’d rather be here in your arms.” Ah yes, there is no better place in the entire world than in the arms of the woman you love, no question about it. This song was released as a single, but didn’t fare all that well on the chart. The Duprees follow that with an interesting rendition of Pat Boone’s “Exodus.” This is kind of an odd song. “Theme Of Exodus” was composed by Ernest Gold for Otto Preminger’s movie. And Pat Boone added lyrics for his own version, which is also known as “This Land Is Mine.” The Duprees deliver an earnest performance.

“Yours” is another song offering a declaration of love. “I’ll never love anyone the way I love you.” Then they give us, “I Gotta Tell Her Now,” a song about needing to break up with a woman, but being worried about hurting her. This was back in the time when people cared about each other’s feelings and so on, long before the stupid days we are currently stuck in when people break up with their lovers through text messages. “Have You Heard,” the album’s title track, is one of the album’s best tracks. It is a love song about going on loving a woman after the relationship has ended, and hearing the news of her successful life since their breakup. There is something so honest about this song, in the delivery. “Rumors come and go/Still, I would like to know/If it’s true, won’t you tell me.” It was written by Lew Douglas, Frank Lavere and Ray Rodde.

The first album on this disc had a song from the film Gone With The Wind, and this one has a song titled “Gone With The Wind.” As far as I know, this song has nothing whatsoever to do with the film or the book, other than sharing its title, but again, I’ve never seen the movie or read the book. This song was written by Herb Magidson and Allie Wrubel, and was recorded by Horace Heidt And His Brigadiers in 1937, two years before the film was released. That’s followed by “So Little Time,” the title of which certainly rings true. Even in these days without work, when it seems that all we have is time, there seems to be so little of it. How is that even possible? I need to speak with someone about this. Anyway, this is a really good song. Here is a taste of the lyrics: “Why do the hours you spend with me/Always go rushing by/Why can’t your kisses go on endlessly/Why oh why oh why/Oh, there’s so little time.” I could do without the sound of the waves at the beginning of “The Sand And The Sea,” but I do like the sweet and romantic sound of this song, and I love that piano part. The album ends with a cover of “Where Are You,” a beautiful song written by Jimmy McHugh and Harold Adamson. “Where is my happy ending/Where are you?”

CD Track List
The Coed Albums: You Belong To Me/Have You Heard is scheduled to be released on September 11, 2020 through Omnivore Recordings.
Posted by Michael Doherty at 7:24 AM