Adam Wade: “The Coed Albums: And Then Came Adam/Adam And Evening” (2020) CD Review 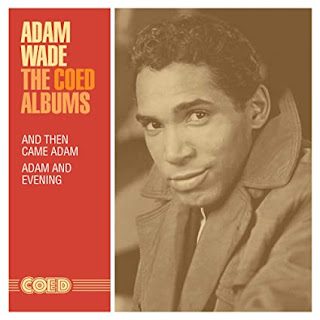 Omnivore Recordings is taking us back to the late 1950s and early 1960s with the release of several collections of music from the Coed Records label. Much of it is that great doo-wop music, such material from The Crests and The Rivieras. Adam Wade gives us something a little different, performing more in the crooner style, with big band arrangements. He recorded two albums on the Coed Records label in the early 1960s – And Then Came Adam and Adam And Evening – and both are included on a single disc. Following these two albums, Adam Wade moved to Epic, and also began an acting career. In 1975, he became the first black game show host, hosting Musical Chairs on CBS. This disc includes new liner notes by Bill Dahl, with information on the recordings as well as on Wade’s career beyond these two albums.

And Then Came Adam

The first album, And Then Came Adam, was released in 1960. It begins with “Tenderly,” which has a sweet, almost magical opening that immediately transports us to a gentler, more loving place. And who doesn’t want to visit such a place these days? And Adam Wade’s voice is like the most wonderful guide to this other realm. “Tenderly” was written by Jack Lawrence and Walter Gross, and recorded by folks like Sarah Vaughan and Nat King Cole. The backing vocalists play a prominent part in “Tell Her For Me,” even starting this track before Adam Wade comes in, and then interacting with Adam throughout, for example telling him, even teasing him, “You love her, you know you still do.” Adam’s vocal performance is excellent here, and works in some contrast to the attitude of the backing vocalists, creating an interesting dynamic. “Tell Her For Me” was written by Selma Craft.

Things get livelier with “Just In Time,” with its big band sound, and with Adam’s vocal approach matching that energy. Also, a strong bass line helps make this one of my favorite tracks. “Just In Time” was written by Betty Comden, Adolph Green and Jule Styne. And once it kicks in, “Witchcraft” is also a lot of fun. The joy in his voice as he tells us “And I’ve got no defense for it” is delightful, and we know just exactly how he’s feeling. This song, written by Cy Coleman and Carolyn Leigh, was a hit for Frank Sinatra. Adam Wade does a spectacular job with it. He then delivers a good rendition of Cole Porter’s “So In Love.” There is an intensity to his performance at moments, as when he sings “Even without you/My arms fold about you.” At other times he gets caught up in the sweep of the strings, in the passion of the moment. This song was written for Kiss Me, Kate. That’s followed by “Fascination.” There is something of a fairy tale vibe to this track, a magical landscape, a moonlit dance, which is so appealing. I want to get lost in the sound of this song, have it take me right out of the questionable reality I find myself immersed in during my waking hours.

When I was growing up, I imagined that I’d meet dozens of women named Ruby, and they’d all be cool, for that name figured prominently in so many songs. That has not turned out to be the case, but I still like the songs. This particular “Ruby” was written by Heinz Eric Roemheld and Mitchell Parish, and was a hit for Ray Charles. “You thrill me so/I only know/Ruby, it’s you.” Adam Wade also delivers a beautiful rendition of “I Had The Craziest Dream,” featuring a strong and smooth vocal performance. “I found your lips close to mine, so I kissed you/And you didn’t mind it at all/When I’m awake/Such a break never happens/How long can a guy go on dreaming.” The first album concludes with “Around The World,” a totally enjoyable number that moves at a good clip and includes plenty of good work from the horn section. “No more will I go all around the world/For I have found my world in you.”

The second album, Adam And Evening, was released in 1961. Its opening track, “Sleepy Time Gal,” begins with some nice work from the backing vocalists, paving the way for Adam Wade’s entrance. His vocal performance has a gentle and romantic sound. It is not quite a lullaby, but headed in that direction. The romantic vibes then continue with “We Kiss In A Shadow,” written by Richard Rodgers and Oscar Hammerstein II for The King And I. This is the first of two songs from that musical to be included on this album. The second selection is a pretty rendition of “I Have Dreamed.” And from BUtterfield 8, Adam Wade chooses “Gloria’s Theme,” delivering a good rendition. I particularly like his delivery of the line “All she holds is a shadow.” That’s followed by “Guess I’ll Hang My Tears Out To Dry,” which features another gentle and beautiful performance. This track too takes us to a different time, a different place. It was written by Sammy Cahn and Jule Styne. “When I want rain, I get sunny weather/I’m just as blue as the sky/Since love has gone, can’t pull myself together/Guess I’ll hang my tears out to dry.”

Things begin to swing a bit with “Canadian Sunset.” “Cold, cold was the wind/Warm, warm were your lips.” Oh yes, we all know the thrill of that feeling, that moment, don’t we? Another of this album’s highlights is his rendition of “My Reverie,” the track itself feeling like a reverie, or dream, right from the beginning. This track features some beautiful work from the string section. As “I Couldn’t Sleep A Wink Last Night” begins, the presence of a clock is hinted at, before Adam’s vocals come in. It is like he has waited for an appropriate hour to reach out to her, after an argument led to bad dreams the previous night. “I had to call you up this morning/To see if everything was still all right/Yes, I had to call you up this morning/Because I couldn’t sleep a wink last night.” This track has a beautiful sound, in part because of the strings. That is followed by “For You.” There is something kind of delightful about this song, with those backing vocals. And again, there is a magical quality to Adam Wade’s delivery, helping to make this track another of the disc’s highlights. The album concludes, somewhat appropriately, with “The Party’s Over,” a song written by Betty Comden, Adolph Green and Jule Styne. When the bass line comes in, things start to get moving, and as this song builds, it seems that the party is just beginning. “Now you’ve got to wake up.” Maybe, but you can take that sense of joy into the new day, as this rendition seems to urge.

CD Track List
The Coed Albums: And Then Came Adam/Adam And Evening is scheduled to be released on September 11, 2020 through Omnivore Recordings.
Posted by Michael Doherty at 7:34 AM