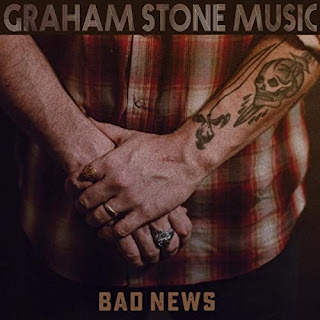 Graham Stone Music is the project of singer and songwriter Graham Stoll, who is based in Richmond, Virginia. Last year he released his second album, Bad News, which features all original music. On this album, Graham plays acoustic guitar, electric guitar, bass, drums and banjo, in addition to providing the vocals. Sounds like a one-man band, yet he does get some help from Aubrey Stoll on vocals, Ben Lee on bass and vocals, Clayton Stoll on vocals and electric guitar, and Jordan Stoll on vocals and drums. The music on this album is a mix of folk, country and rock.

Bad News gets off to a strong start with “Tennessee Hills,” a rocking country number with a great thumping beat and a good amount of energy. It’s a song about rushing out of the city to be with his love in a more natural setting, something that is incredibly appealing, particularly these days. “Well, we found a little cabin in a holler down low/Where the wind blows easy and the creek runs slow/Yeah, you could try to find us, but you never will/We ain’t never gonna leave these Tennessee Hills.”  This track features some really good work on guitar and some nice backing vocals. That’s followed by “Little River.” The first line of this song grabbed me, in large part because I am eager to be able to purchase a house, to finally have a real home, particularly as repairs in my apartment have displaced me during a pandemic. Fun! Anyway, that first line is “I don’t need a house.” Graham sings, “I don’t need a house/Just to keep my soul in/And I don’t need a car/Because I don’t know where I’m going.” This one has an easygoing sound and pace. At a certain point it seems the song is ending, but in a way it is just beginning, for the next section is fantastic, those vocals working to raise our own energy, our spirits. I wish that section went on longer, for I needed a bit more to get there, you know? There is a good energy to “Oh Hell,” driven by that drum beat. “And I thank god that I have the breath to yell/Oh hell.” Indeed! I am yelling “Oh hell” a lot these days. The drum work is excellent on this track.

“Fighting For” is a song about life and the state of the world, a song that is addressed from one generation to the next, with Graham singing “Nobody knows what this life holds, but I guess maybe it’s better that way” and questioning the wisdom of bringing another life into the world. But the line that really stands out for me is “Sometimes I won’t know what to tell you, my son, and every day it’s getting worse.” That line certainly rings true. My girlfriend and I have been talking about how each generation thinks things are worse for the next. But what I’ve been wondering is, What if every generation is right, and things are just getting worse and worse? Looking around today, it would be difficult to argue that things are not getting worse. Who would have guessed we’d end up with a soulless, narcissistic sociopath occupying the White House at a time when we desperately need a leader? We are fucked. Yet there is something positive about this song. “Renew your mind ‘cause this world ain’t right, but we must finish the race.”

“Bad News,” the album’s title track, is a total delight. It is a cheerful, playful number about how things are terrible, which is perfect. The song’s first lines are “Bad news, bad news/It’s like the whole world’s got the blues/On every phone, TV and computer screen/And even certain gas pumps too/No matter where you turn it seems all you learn/Is that the world’s chock-full of bad news.” We need this. There is even a whistling section. I love this song. It totally shook me out of my blues. Before the end, he offers a bit of advice: “Sometimes the best thing to do/Is turn everything off and go walking outside/Don’t focus on all the bad news.” And yes, that’s just exactly what we’ve been doing. And of course, as he reminds us, love can help heal the world, and lord knows the world needs it. That’s followed by another of my favorite tracks, “Richmond Town.” It has the feel of an Irish folk tune, and when it kicks in, I nearly expect it to turn to punk, for it has that sort of build and the drums are right there, but it remains country, a lively rocking wonderful sort of country. Get off your ass and dance, damn it. This is so good.

The line “In fact, I can be a real piece of shit sometimes” near the beginning of “Celebrate” made me laugh out loud the first time I put this disc on. How is that for plain speaking? This track also features a great bass line. That’s followed by “Nobody,” which has a humor to it, a sense of play, and you might end up singing along before too long. “I’m a nobody, a nobody, I don’t care about nobody cares about me, buddy.” While listening to this song the first time, that Emily Dickinson poem popped into my head. You know, the one that reads “I’m nobody! Who are you?/Are you – Nobody – too?/Then there’s a pair of us!”  At the end of this track, there is a section of just vocals and percussion. By then, almost certainly you will be singing along. The album concludes with “Hauling Grass,” a rocking song about being on the road, shipping weed. Interestingly, this song brings us right back to the same geographical point that the opening track mentions in its first line, “southbound 81.” The first lines of this one are “Well, I’m rolling down the highway/Heading south on 81.” But this song tells a different tale. “‘Cause I’m tired of waiting on the world to change/I’m tired of unloading trucks for fucking minimum wage/And I did the math, it’ll take three runs/We can pay that bill and then I swear I’m done.”