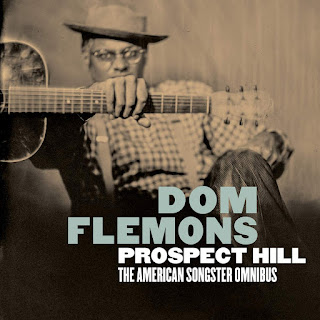 Dom Flemons’ fantastic third album, Prospect Hill, was originally released in 2014, and this year got the deluxe treatment. Prospect Hill: The American Songster Omnibus is a two-disc set featuring, in addition to the complete original album, an EP that was released in 2015 as part of Record Store Day, and a lot of previously unreleased bonus tracks, as well as extensive liner notes. If life has been stressing you out (and seriously, how could it not?), this two-disc set is just the thing to take your mind off the world’s troubles. Dom Flemons plays a variety instruments on these tracks, including acoustic guitar, electric guitar, banjo, harmonica, quills, fife, and percussion. He also has some talented musicians joining him on this release, such as Guy Davis, Ben Hunter, Keith Ganz, Ron Brendle, Kobie Watkins and Brian Horton. These two discs contain a mix of original material, written by Dom Flemons, and some good covers, music that includes folk, jazz, country and blues.

The first disc contains the complete original album, which opens with an original number titled “‘Til The Seas Run Dry,” a delicious old-time jazz tune. It takes about three seconds before this album has me smiling and tapping my toes, and that is saying something, particularly during these times of anxiety and frustration. This track features some wonderful stuff by Keith Ganz on six-string banjo and by Brian Horton on clarinet. There is even a woodblock solo by Kobie Watkins. And these lyrics are anything but ambiguous: “Get away, get away/I’m never gonna take you back/Not ‘til the clocks run backwards/And the seas run dry/You treated me like a fool.” But it is that instrumental section toward the end that really makes this track something special. It made me grin like a happily demented goof. And then those shouts of “Yeah” echoe exactly what I was shouting myself. That is followed by “Polly Put The Kettle On,” a great old folk tune, delivered with joy and integrity. I love Ben Hunter’s work on fiddle. Ben Hunter and Joe Seamons provide backing vocals. “Tell me, baby, what you think/Let me go and get myself another drink.” We then get a delightful rendition of “But They Got It Fixed Right On,” this track featuring some nice harmony vocals by Pura Fe Crescioni. The line “And she asked him to fix her jelly roll” is a good example of where this track is coming from. It’s a fun and totally silly number. There is even a bit of scat toward the end. What more could you ask for?

Dom Flemons’ rendition of Frank Loesser’s “Have I Stayed Away Too Long?” has a cheerful, pleasant vibe, and includes some good work on guitar. But what makes me love this track are those little touches on saxophone that are scattered throughout and then that delicious lead in the second half of the track. That’s Brian Horton on tenor sax. Then we get a bluesy instrumental number titled “Georgia Drumbeat,” featuring some great stuff by Guy Davis on harmonica. I love the way that instrument interacts with the soprano saxophone in the second half of the track, and all over a good rhythm. That’s followed by “I Can’t Do It Anymore,” a cool original song that mixes blues, country and rock and roll. “Smoked my stuff, drove off in my car/Broke my banjo so I got to play my guitar.” And I love the way Dom delivers that “Whoa, whoa” which follows those lines. These lines likewise stand out: “So I’m going down, down to the bar/Hands in my pockets so they don’t make it to your jaw.” This track also features some excellent work on guitar. Then the instrumental track “Sonoran Church Two-Step” features Ben Hunter on fiddle and Dom Flemons on banjo. What could make us happier?

“Too Long (I’ve Been Gone)” is a sweeter, mellower and pretty folk tune, written by Dom Flemons. The first lines of this one are “Don’t need no cup of coffee in the morning/I can get up fine, I can get up fine.” I need to play those lines for my girlfriend. This is one of my favorite tracks. “Four winds blow the breeze, wipe my tears away/They say, you’re fine, you’re fine/And when the world seems so far away/I’ve got nothing left except my mind/Too long, too long I’ve been gone.” That’s followed by “Marching Up To Prospect Hill,” a fun instrumental tune (well, mostly instrumental). This one features Guy Davis on harmonica, and Dom Flemons on rhythm bones. There is also a whole lot of energy. Just pull out your back porch and join in. Then “It’s A Good Thing” made me laugh out loud, especially on the lines “I had a woman by the name was May/First man home got her every day.” It’s a playful and totally enjoyable song about having more than one woman. That’s followed by “Grotto Beat,” an odd little number with some good percussion. Guy Davis does a bit of narration at the beginning: “Ladies and gentlemen, you’ve never seen marching like this/Dom Flemons is marching backwards up the mountain/That is the world famous grotto beat.” Dom Flemons plays wooden cane fife, and Ben Hunter and Joe Seamons provide backing vocals. Ben Hunter also plays the bass drum. “If you won’t come down, can’t you bring us up?”

I love Brian Horton’s work on tenor saxophone on “Hot Chicken.” That lead is followed by a great lead by Keith Ganz on electric guitar that has a delicious classic sound. “Old man laid his fiddle down/Wine glass in his hand/Screaming times have gotten so damn hard/That I can no longer dance.” Oh god, may they never get that bad. That’s followed by “San Francisco Baby,” another totally enjoyable song, with a groovy bass line by Ron Brendle. This track has a playful sense about it. The scat ought to get you smiling, if there is any smile left in you. The original album concludes with another fun song, “My Money Runs Out,” one which reminds me a bit of The Lovin’ Spoonful’s recording of “Fishin’ Blues.” Dom Flemons is on banjo, and Guy Davis is on guitar. “I ain’t out of my class/I don’t care if I never wake up.”

The second disc contains the EP What Got Over, which was originally released on vinyl as part of Record Store Day in April of 2015, and several previously unreleased bonus tracks. It begins with the nine tracks of the EP. I know, it seems like nine tracks would make it an LP, but a few of these songs are quite short. The first one, “Big Head Joe’s March,” is only a little over a minute in length. It’s a cool instrumental tune, a march, as its title indicates, with Dom Flemons on bass drum and Guy Davis on snare. That’s followed by a great version of “Milwaukee Blues,” with that delicious old-time feel and sound, some nice work by Dom Flemons on banjo. Then we veer into the blues with “Clock On The Wall,” an original song that opens with some great wailing on harmonica by Dom. This one has some interesting lyrics too: “I got you some flowers/Lit them on fire twice/I cried out ‘Oh lord’/You threw ‘em in a bucket of ice.” And those lines about cutting his meat make me laugh. That’s followed by a wonderful rendition of “Keep On Truckin’” that features some fun work on banjo.

The EP contains alternate versions of a few songs from the album, starting with “Hot Chicken.” This one is an acoustic rendition and features a lead on harmonica halfway through. And is that a little nod to “In The Mood” in the guitar work just before that? That’s followed by an alternate version of “Have I Stayed Away Too Long?” This version features Ben Hunter on fiddle. Then “Going Backward Up The Mountain” seems to be a variation of the first disc’s “Grotto Beat,” with Dom Flemons again on wooden cane fife. That beat is in control here. And we get an alternate version of “‘Til The Seas Run Dry,” which is lively and fantastic, having a great energy to the vocal performance. There is also more good work by Ben Hunter on fiddle. The EP concludes with its title track, “What Got Over,” a short original song with a great beat.

The rest of the tracks on the second disc were previously unreleased. “Wingtips,” the first of these tracks, is a short percussion piece continuing the beat from “What Got Over.” That’s followed by an instrumental rendition of “Going Backward Up The Mountain,” with Dom Flemons playing wooden cane fife, and then “Sugar Dance.” These tracks are all about the percussion, all about rhythm. An instrumental version of “Grotto Beat” is mostly percussion as well, but also includes more nice work on wooden cane fife. “The Songster Arrives” is also all about the beat, and is another short track. By the way, the title of this track, and of this two-disc set, relates to Dom Flemons referring to himself as The American Songster, and he explains the term and its origins in the set’s liner notes. On “Georgia Drumbeat,” the beat is prominent as well, but there is also some really nice work on guitar.

Dom Flemons delivers an instrumental rendition of the blues song “Clock On The Wall,” which is cool. I love that harmonica, and those playful touches on guitar, which stand out even more. That one section toward the end feels a bit empty without the vocals, but other than that, this track totally works. These bonus tracks also include instrumental renditions of “Hot Chicken,” “Too Long (I’ve Been Gone)” and “What Got Over.” I particularly like “Too Long (I’ve Been Gone),” that guitar sounding so sweet and pretty, this track having a comforting, relaxing vibe. Those are followed by “The Grand Manifesto,” an unusual instrumental tune, mixing bluegrass and blues sounds. The second disc then concludes with “Blue Butterfly,” a pretty guitar instrumental track.

Disc One
Disc Two
Prospect Hill: The American Songster Omnibus was released on February 28, 2020 through Omnivore Records.
Posted by Michael Doherty at 8:19 AM