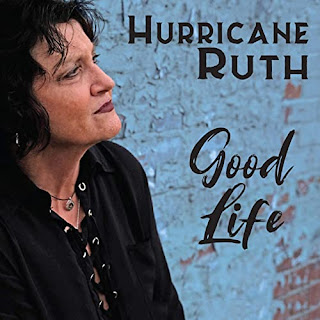 With a name like Hurricane Ruth, you expect a certain amount of power from her, a certain amount of excitement, maybe even a certain amount of danger. Well, you won’t be disappointed. On the first track of her new album she sings “You ain’t getting out alive/Tonight I’m going to make you mine.” And she does, she makes you hers. You will be in completely in her hands long before that first track is over. Good Life features mostly originally material, co-written by Ruth LaMaster. Joining her on this release are Scott Holt on guitar, Calvin Johnson on bass, Bruce Katz on keys, and Tony Braunagel on drums.

That first track, “Like Wildfire,” comes on strong, an unabashed rocker, featuring some good work on electric guitar and keys. Here she tells us she’s “burning like wildfire/Burning out of control.” And there is a sense that there is a wild and raw energy burning inside that voice, a barely contained force that might shoot from the speakers and tear into your heart. And you’ll gladly take that pain. But it feels more like this song is being performed at some roadside joint, a honky tonk bar with at least a couple of bikes parked outside. This song was written by Ruth LaMaster, Kenneth Wright and Joel Hutsell. The power in her voice doesn’t decrease any as the band shifts into a more bluesy number, “Dirty Blues.” This one feels like a celebration of music, or a celebration of that person on the dance floor who is seriously digging the music, who completely throws herself into it. She sings, “I want it down and dirty/I want to sing along.” Interestingly, Ruth is providing for us the very thing she is seeking.

“What You Never Had” has a delicious blues groove, and is about not letting the things you lack ruin you. The song offers some good advice: “Life’s about living, not what you have/So why worry about, why worry about what you never had.”  I love that work on organ. This is a completely enjoyable track, and one I think most of us can appreciate. It was written by Ruth LaMaster and Tom Hambridge. That’s followed by another of the album’s highlights, its title track, “Good Life,” written by Ruth LaMaster and Scott Holt. This one has a beautiful soulful blues vibe, and interestingly it too, as “What You Never Had,” provides words of wisdom from her mother. This album, by the way, is dedicated to Ruth’s mother, Norma Jean LaMaster. “Always remember I love you/Fight for your dreams and do what you love/Live each day like it’s your last day/When it’s your time, then you can say/I’ve had a good life.” Ruth’s vocal performance here is passionate and engaging.

Hurricane Ruth gives us a lively rendition of Gary Nicholson’s “Torn In Two,” one of only two tracks she didn’t have a hand in writing. But she delivers it like it’s her own song, sinking her teeth into it. I like these lines: “My body says I’ve got to have you/My mind is saying you’re no good/My heart’s divided, it’s undecided/And all of me is all confused.” That’s followed by “She’s Golden,” an empowering number featuring another passionate vocal performance. “The hell that she went through only the strong survive/But she remembered how it felt to be alive/His goodbye was her chance to change/No more sadness, no more pain/From the ashes of her life she’ll rise again.” Then “Black Sheep” celebrates the so-called problem child, a staple of the rock song. “Breaking all the rules at an early age/I was always in trouble because I had hell to raise.” And in this song she refers to her stage name, singing “I’m a wrecking ball, yeah, I’m a hurricane.” And we are left in no doubt that that’s the truth.

“Who I Am” begins with a good beat, and is another song about taking control of your life, stating clearly “This is who I am, not who I was.” Can people change? Listening to this song, I am convinced they can. There is an excellent instrumental section featuring some strong work on keys, and that is my favorite part of this track. I wish that funky little jam went on a little longer. That’s followed by “Late Night Red Wine,” a good rock song about those tough mornings that follow some fun nights, featuring some nice work on electric guitar. The album then concludes with a sweeter, soulful number, “I’ve Got Your Back.” We all need to hear someone tell us that sometimes, and these days we need to hear it a whole lot more than usual. Just to know we are not alone, that our struggles aren’t ours to face without help. This one was written by Karen Leipziger, Freda McCrary and Irene Kelley. “No matter what, I’ll be there through thick and thin/I’ll lift you up so you can rise again.” And if you don’t have someone who tells you this, this song should help you get through. “We are many/When we’re standing side by side/We are one/Raise our voices true and high.”

CD Track List
Good Life was released on April 17, 2020 through American Showplace Music.
Posted by Michael Doherty at 6:34 AM