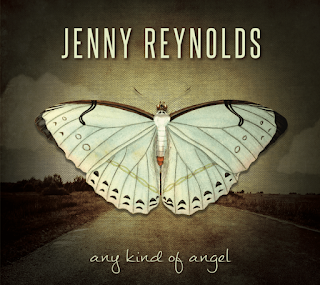 Jenny Reynolds is a singer and songwriter from Massachusetts who is now based in Austin, Texas. She creates compelling songs filled with interesting characters, songs that connect with listeners on that crucial human level, touching on a sense of shared experiences and shared concerns, and with a voice of beauty and honesty and compassion. Her new album, Any Kind Of Angel, features mostly original material. Joining her on this release are Scrappy Jud Newcomb on guitar; Andre Moran on electric guitar; Mark Hallman on organ, bass and drums (Hallman also produced the album); Nate Rowe on upright bass; Warren Hood on fiddle; BettySoo (from Charlie Faye & The Fayettes) on accordion and backing vocals; Jaimee Harris on backing vocals; Jenifer Jackson on backing vocals; and Oliver Steck on cornet.

The album opens with a strong and intriguing song, “There Is A Road.” There is something gorgeous about it, but also something intense, something to put you on edge, even while you’re pulled in by its beauty, by that guitar work. In part, it is the song’s lyrics, and the danger it describes, with lines like “Does your hope bloom like roses or sting like a thorn/Guns rule our cities, and we have been warned/To believe in a road/Running north, so I’m told.” And those backing vocals by BettySoo and Jenifer Jackson are wonderful. That is followed by “Any Kind Of Angel,” the album’s title track. This song has a strong sense of place, with details like “When there ain’t nothing in the well/Hasn’t rained out here for years/The creek is dry, the cattle’s gone/The bank says we are overdrawn.” And so by the time she sings “Send me any kind of angel/When I’m crying, I want someone to know,” we feel that need ourselves. And can’t we relate to that sense of wanting someone to know our distress, and to that desire to reach out for comfort, regardless of our particular set of circumstances? And these lines I know a lot of people will relate to: “There ain’t no love like a mother’s love/No matter what her child has done/Love your own and keep them near.” This track features some nice work by BettySoo on accordion and by Warren Hood on fiddle, adding to the song’s beauty.

“The Way That You Tease” has a cool, jazzy vibe and style, in that guitar work and Jenny Reynold’s vocal work. This track also features a groovy, catchy bass line. And then toward the end, the cornet rises up, taking over with a bright force, somewhat in contrast to her vocal delivery, which has a bit of a smooth, intimate quality. “Say what you want, but don’t hurry/I might like the way that you tease.” Then “Dance For Me” has a delightful sort of gypsy sound, which fits with the subject of a traveling dancer and lines like “My life means leaving people wanting more and more/Every scene, there’s a step, a turn, a one-two-three.” This song also touches upon aging, and forced retirement from something she has a passion for, and something that has defined her. “Company says I’m retired/My soul makes them a liar/Should I now begin to feel my age?” And ultimately there is something positive and empowering, rather than sad, in the song’s main line, “But I only dance for me.”

“The Trouble I’m In” begins with a good instrumental section. Then when the vocals come in, we are brought to a confessional booth and put in the place of the priest, hearing her confession, all over a catchy and delicious rhythm. And the line “Next was a lawyer, I enjoyed him the most” makes me laugh, as does “The lord made him thick, so I showed him thin.” This track also features some really good work on guitar. That’s followed by “Love & Gasoline,” which has a jazzy vibe and features more good backing vocal work from BettySoo. “The bill is high and the lights are low/Don’t ask for truth, you don’t want to know.”

“The Way We Say Goodbye” is told from the perspective of a person who is alone at an airport, watching other people. “Watching other stories and inventing some of my own” is a wonderful line, and one we can probably all relate to. Yet this is a song about human interaction, the connection we have to each other. That’s followed by “Before I Know You’re Gone,” a beautiful and powerful song featuring some gorgeous work on fiddle and an excellent vocal performance. This is one of my personal favorite tracks. Check out these lyrics: “Tell myself I can rise above it/Walk around, thinking nothing of it/Too much to be guessing, too much to assume/Catch me when I’m dreaming that I’ve done nothing wrong/And I’m afraid of letting go before I know you’re gone.” Then in “White Knuckle Love (Didn’t I Know),” Jenny Reynolds sings “I tell myself there’s nothing wrong/And fall asleep with the light on/Somebody save me, say it ain’t so/She’s out with my baby and didn’t I know.” The album concludes with its sole cover, a pretty rendition of Hank Williams’ “I’m So Lonesome I Could Cry,” a perfect song for these days of isolation and worry, and a moving ending to this excellent album.