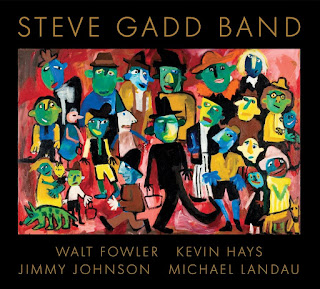 When I was fifteen years old, my dad drove my friend Dan and me to New Jersey so we could attend the first Modern Drummer Festival. It was there that I was turned onto the impeccable work of Steve Gadd, who performed (with The Gadd Gang) and spoke about his craft. That day I became a fan, and my appreciation of his work has only grown over the years. Even if his name is unfamiliar to you, you’ve heard his playing on albums by Paul Simon, Chick Corea, Eric Clapton and Paul McCartney. He has also released many albums as a band leader. In 2018, the Steve Gadd Band released a self-titled album featuring mostly original work, written by Steve Gadd and other members of the band. The Steve Gadd band is made up of Steve Gadd on drums, Walt Fowler on trumpet and flugelhorn, Kevin Hays on keyboards and vocals, Jimmy Johnson on bass, and Michael Landau on guitar, with Duke Gadd (Steve’s son) joining the band on acoustic guitar and percussion on several tracks.

The album opens with “I Know, But Tell Me Again,” a tune with a cheerful, delicious groove and feel, and a certain amount of funk. It is approximately two minutes into this track that we get a drum and percussion solo. It’s brief, but good, just a taste of what he does, for this album doesn’t really contain any extended soloing from Gadd. This is one of the tracks to feature Duke Gadd on percussion. “I Know, But Tell Me Again” was written by Jimmy Johnson and Steve Gadd. That’s followed by “Auckland By Numbers,” a sly, mellower number that kind of sneaks in, slinking around the room and catching you in its spell. There is a cool vibe to this one, and it features some seriously good work on guitar. I guess that shouldn’t be any surprise, since it was composed by guitarist Michael Landau. I also like the work on horn, which feels like a voice rising from the mist.

On “Where’s Earth?” a great, funky groove is established immediately. This is another of the tracks to feature Duke Gadd, this time on acoustic guitar. He also co-wrote the track with Kevin Hays and Michael Landau. This one takes us on an interesting journey outward, all the while that fantastic groove continues beneath, keeping us somewhat grounded. That groove helps answer the song title’s question, a question many of us may be asking ourselves these days. Or maybe what we ask is, Where is the Earth that we knew? This track features some good work on keys. Then “Foameopathy” eases in with a strange but soothing introduction, relaxing us. So it comes as something of a surprise when the tune takes a turn, the band creating another great groove, featuring some excellent work by Steve on drums. The horn and keys at times work somewhat in contrast to that groove. Then, a couple of minutes into the track, everything seems to come together, and the track takes on a rather bright sound. Soon we are back to that groove, and Steve’s work on drums is really the focus. His playing makes this one of my personal favorite tracks, but there is also some excellent work on guitar. As this track reaches its conclusion, it returns us to the beginning. This one was written by Steve Gadd, Walt Fowler and Larry Goldings. That’s followed by “Skulk,” a track composed by Larry Goldings and Steve Gadd. “Skulk” is a word I don’t hear all that often, which is a shame, for it’s a great word. It usually makes me think of that scene from Four Weddings And A Funeral, when Andie MacDowell says she could skulk around a bit if skulking were required. Anyway, this one has kind of a fun vibe and a catchy rhythm, and features more good work on guitar. But for me it is that keyboard part that is really the delight here. And I like that section just before the end when everything slows a bit. Then “Norma’s Girl” is a mellower number. It has a romantic side, and also an introspective side, and features some pretty work by Walt Fowler. “Norma’s Girl” was written by Jimmy Johnson.

“Rat Race” is another fun, funky, playful number, this one written by Michael Landau and Duke Gadd. Duke Gadd plays percussion on this one. That bass line stands out for me, but everything is working really well. People talk about getting stuck in the rat race, but I wouldn’t mind being caught in this groove, just remaining in it for quite a while. There are so many delightful touches, moments that make you smile, if not laugh outright. That’s followed by “One Point Five,” the disc’s final track to feature the work of Duke Gadd on percussion. There is something catchy about this track’s groove as well, with something of a Latin feel, and then just as you’re getting caught in it, the tune goes in a different direction, and ends up getting even better. This track features some nice work on keys, and a cool drums and percussion section. The track fades out on that wonderful percussion section. The group then delivers a good rendition of “Temporary Fault,” the album’s only cover, written by Allan Holdsworth, and originally included on his 1982 LP I.O.U. They then relax into a classic, soulful groove with “Spring Song,” this one written by Kevin Hays, and also featuring him on vocals. It is the album’s only track to include vocals, and it opens with these lines: “In our life and time there will be sorrow/No reason or rhyme as the days come and go.” Well, that sounds just about right.  Yet this track makes me feel good. That guitar lead is one of my favorite parts, but this entire track is wonderful. “We all want to win, but winning’s not the answer.” The album then concludes with “Timpanogos,” a tune with a sweet vibe, and containing some surprising moments. This one was composed by Walt Fowler, and it gives each musician a chance to shine.

CD Track List
Steve Gadd Band was released on February 5, 2018.
Posted by Michael Doherty at 8:16 AM