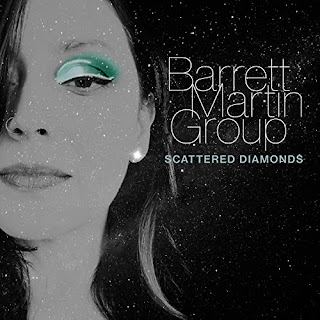 Barrett Martin is a drummer, percussionist and composer based in Seattle. You might know Barrett Martin from his work in Screaming Trees and Mad Season, but that won’t entirely prepare you for what you’re going to hear on the magnificent new album from Barrett Martin Group, Scattered Diamonds. This release features all original music, written or co-written by Barrett Martin. On these tracks he plays a variety of percussion instruments, including drums, bata drums, tablas, vibraphone, gamelans, dumbek and berimbau, as well as electric guitar, bass, electric piano, clavinet, tambura and koto. And he is joined by some seriously talented musicians on various tracks.

The album opens with “Roll The Bones,” featuring John Rangel on piano, Luis Guerra on upright bass, Kanoa Kaluhiwa on tenor saxophone and Dave Carter on trumpet. My favorite part is that delicious section of piano and drums and bass, that rhythm totally working. And then the track seems to take on a new energy from that point, soon moving into another cool section with some nice work on saxophone, while that great rhythm continues beneath it, guiding us, moving us forward. Things then get a little funky with “Way Down.” At first it is the horn section that takes control, Ed Ulman on trombone and Dave Carter on trumpet, their voices soon soaring above the busy city, the hubbub, showing us a way out, a way up. Meanwhile the drums, the bass, and the guitar work might get you dancing. Kevin Hudson is on bass, and Paul Fischer is on electric guitar. Then suddenly the song breaks through to a gentler, more easygoing place, that rhythm relaxing, holding back, making way for Ben Thomas to take over on vibraphone. But it isn’t long before things are rocking and moving again. Then “Swingin’ On A Moonbeam” gets more exciting and lively as it goes. This one really starts to grab me in the second half, when that energy turns fiery and fantastic. It then relaxes again just before the end.

“Battleship Swing” establishes a catchy groove right away. This one has kind of an intriguing title, right? It conjures in my mind soldiers suddenly, perhaps in the midst of war, stopping and cutting loose on a dance floor, while the band shakes and swings, and the boat rocks in part because of the dancers and in part because of the artillery shells exploding all around. But the sailors and soldiers are miraculously safe, maybe because they are in their evening dress. This one features some nice work by Joe Doria on keys and by Ben Thomas on vibraphone. That’s followed by “Alhambra,” which has a kind of light, sweet, playful vibe at first, then takes an interesting turn with some wonderful work by Rahim Alhaj on Iraqi oud. I love when music can surprise you like that. This is one of my personal favorite tracks. Then “Firefly” features some excellent work by John Rangel on piano.

“Sarasvati” eases in, and for a moment you feel it’s going in one direction, a mood piece, but suddenly the track kicks in with a great force, taking on a strong beat. And that isn’t the only surprise. We are also treated to some fantastic vocal work by Mehnaz Hoosein. All these various parts have a wonderfully mesmerizing effect. I am completely drawn into this track. Kevin Hudson is on electric bass, Paul Fischer is on electric guitar, and Ben Thomas is on vibraphone. Then “The City Slithers” creates an intriguing landscape, a city at night, odd activity unseen during the day. What denizens emerge to create that rhythm? Something mysterious, perhaps magical, and certainly not to be disturbed. The percussion is king from the start of “The Firebird,” and you get the sense that things are going to get wild, but maybe aren’t quite prepared for those glorious moments of unhinged power this track presents. The track relaxes after those moments, rebuilding its strength, getting ready for another attack. This is another of my personal favorites. It is a piece that Barrett Martin Group included on the band’s previous release, Songs Of The Firebird. Kim Thayil (from Soundgarden) plays electric guitar on this track, and both Hans Teuber and Curtis Macdonald are on sax. Percussion also begins “Agbadza,”, but creating quite a different vibe from that of the previous track, establishing a good, solid groove. We even have some steel drums on this one. And the horns and flute lift us to another level. Craig Flory plays flute.

Once that bass comes in, I am totally into “Sands Of Venus.” This track just gets cooler as it goes, and is a seriously enjoyable tune. Evan Flory-Barnes is on bass, Andy Coe is on electric guitar, Wayne Horvitz is on keys, Hans Teubler is on saxophone, Dave Carter is on trumpet, and Lisette Garcia is on tambourine. That’s followed by “Jakarta By Taxi.”  There is an excitement about this one, a certain sense of movement, and it features some good work by Paul Fischer on electric guitar, as well as another delicious bass line, this time by Kevin Hudson. Then there is something pleasant about “The Fountain,” something that comforts me and lifts my spirits. It features more good work by Rahim Alhaj on Iraqi oud. That’s followed by “Ichcha,” a track with an interesting combination of sounds and vibes, with something of a progressive feel and with Mehnaz Hoosein returning on vocals. Those vocals become powerful before the end, an impressive performance. Another wonderful groove begins “There Is A Galaxy In Your Heart.” Thione Diop plays bata drums on this track. Evan Flory-Barnes delivers more great work on upright bass. There is a joy to “Play The 4th Prime,” and as it builds, it feels like something wonderful is going to come of it, from hard work, a sort of industrious optimism. Peter Buck (of R.E.M.) joins the group on acoustic guitar for the album’s final track, “Blue Sunrise.” This track also features more good work from Dave Carter on trumpet, and by Joe Doria on piano and organ. I particularly like his lead on piano approximately halfway through.

CD Track List
Scattered Diamonds is scheduled to be released on August 28, 2020 pm Sunyata Records.
Posted by Michael Doherty at 7:52 AM