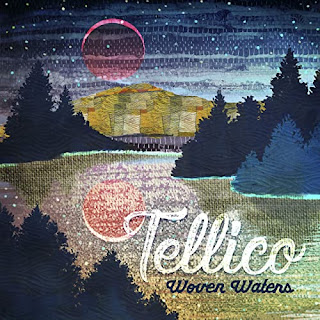 Tellico is a folk and bluegrass band based in Asheville, North Carolina, formed several years ago by three members of Dehlia Low. This group features both female and male lead vocals, and performs original songs composed by the two vocalists, songs that tell stories, songs that speak to us in these unsettling times. The band is made up of Anya Hinkle on vocals, guitar and fiddle; Greg Stiglets on vocals, bass and harmonica; Aaron Ballance on dobro and lap steel guitar; and Jed Willis on mandolin and electric guitar. Their 2018 release, Woven Waters, features all original material, written by Anya Hinkle and Greg Stiglets. Joining the group on this release are John Doyle on bouzouki and David Brewer on drums. John Doyle also produced the album and contributes some liner notes.

“Did you ever walk when your feet were tired/Did you ever walk when the road was gone/Did you ever sing when your heart was aching?” These questions open the album, and are questions for our time, certainly, as are “Did you ever laugh when all hope was lost/Did you ever laugh just to ease the pain?” This song, “Courage For The Morning,” was written by Anya Hinkle and has a positive and sweet folk vibe, with the sound of the mandolin in particular working to lift us up. That instrument often has that power. We could all use a little courage for morning, and for the day. “Did you ever stand when the rest were silent?” “Courage For The Morning” is followed by “Palisades,” written by Greg Stiglets, who sings lead on it. That harmonica work at the beginning has a friendly sound, helping to comfort us. This song has a pretty and inviting sound. “What do your eyes see/Do you long for me tonight/Do the clouded skies/Hide the moon’s full gaze/Do you long for your love tonight.”

“Ballad Of Zona Abston” is one of those great story songs, this one written by Anya Hinkle, who sings lead on it. This one has a more serious sound, and tells the story of a woman in a mining town. There are a lot of memorable lyrics, such as “The mining’s all done, but we’re still on this mountain/I guess our roots were stronger than our wings” and “And a mine’s just a hole in the ground like any other.” “Ballad Of Zona Abston” won the Chris Austin Songwriting Competition in the bluegrass category at MerleFest in 2019. We return to a lighter, more cheerful sound with “Salsa,” a song written by Greg Stiglets about a dog, a Great Pyrenees. There is something gentle about this one. That’s followed by “Fill The Air,” a sweet and pretty song written by Greg Stiglets and Anya Hinkle, featuring some nice blending of the two voices. Here is a taste of the lyrics: “Such a beautiful voice you’ve been given/What kind of god would take you away from your home/I fall to my knees now, defeated/And fill the air with my lonesome song.” This is one of my personal favorites.

Anya takes lead vocal duties on “West Of The Cumberlands,”which she also wrote. “Lost in space, lost on the highway, lost in time/Couple hundred dollars/Dinner and two glasses of wine/Leave a light on, baby, when I go/I ain’t coming home before the dawn.” This track also includes a wonderful instrumental section. Then the instrumental section at the beginning of “New Moon” creates an interesting atmosphere, containing a bit of mystery. It is hesitant at first, but then has an interesting build before settling into a more familiar bluegrass groove. “Not knowing what was waiting in the misty morning dew.” There is a sense of danger, something out in nature, a shadow following him. “What a grave mistake I made/To be out here in the dark.” Nature plays a part in “It’s Just Rain” as well, this one featuring some nice harmonies. And check out these lines: “Trying to hold this thing together/I’m swearing off the weather and regrets/It’s a life just like any other one, I guess/Oh, it rolls and it rolls and explodes and makes a mess/Sing it straight from the heart, it ain’t over yet.”  The album concludes with “Like November,” which has a beautiful, kind of adorable beginning. Then Anya’s vocals come in to tell us, “It looks like it’s all over.” She gives a gorgeous and moving vocal performance. This is a powerful song, probably the most effective track on the album, a song that will stay with you.

CD Track List
Woven Waters was released on November 9, 2018 on Organic Records.
Posted by Michael Doherty at 7:39 AM