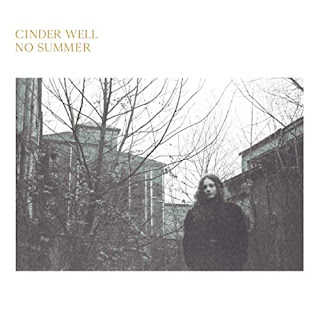 Cinder Well is the project of vocalist, guitarist and fiddle player Amelia Baker, who was raised in California and traveled to Ireland, where she seems to have soaked up the ghosts, the beauty and the magic of the place, and put it all into her music. Her new album, No Summer, is a fascinating and wonderful mix of traditional and modern, personal elements, and the line between the two has blurred beyond recognition. In addition to guitar and fiddle, Amelia plays organ on this album. Joining her are Marit Schmidt on viola and vocals, and Mae Kessler on violin and vocals, both of whom you might know from their work in the group Ekstasis.

The album opens with a gorgeous traditional number, “Wandering Boy,” the first lines delivered a cappella. This track features a strong and moving vocal performance, with some new lyrics added at the end. That’s followed by “No Summer,” the album’s title track, which begins with a kind of sweet and sad folk sound. But what is striking is Amelia’s stunning vocal performance. There is something raw and open about it, yet it also seems to come to us from a deep and shared past. “Spent the whole year staring at the ring on your finger/Looking for summer in the slight of a glance/I’ll take you round to the side of the bar/And show you there is no summer here.” “Our Lady’s” is another intriguing track, with traditional sounds and a haunting vibe. It tells the story of Our Lady’s Hospital, an asylum, no longer in use, and is from the perspective of the asylum itself. A sort of if-these-walls-could-talk scenario of a different color, and the track features some seriously haunting work on fiddle. The music gets right into you, and it takes its time with you, that instrumental section building in power, without hurry, the track being more than nine minutes. “There is something cold/A blank wall can destroy you/It made everyone so quiet/And I dream of crumbling/So strongly my pipes burst.” The ending is surprising, the way her voice becomes so naked, so bare. “There is joy there.” Then when she begins the next track, “Fallen,” with the lines “Fallen, you have fallen/To the ground,” perhaps we are still thinking of that building, in a state of disrepair. It is hard to shake that asylum from our thoughts. But this song has quite a different feel, and features a spirited vocal performance.

Amelia Baker delivers a good rendition of “The Cuckoo,” a song that I believe I first heard on a Big Brother & The Holding Company album. This rendition moves more slowly, and features some oddly compelling guitar work. That’s followed by “Old Enough,” a song with vivid imagery and a powerful vocal performance. “I am golden in the evening/We are bolder in the morning/And the long grass, it is grown over the steps of the door.” It ends with some beautiful a cappella vocal work. Amelia Baker then plays fiddle on “Queen Of The Earth, Child Of The Skies,” an instrumental piece that is based on the Irish song “The Blackbird.” That is followed by “The Doorway,” a short instrumental track that sounds like a storm moving through, winds whistling and howling and shaking chimes. The album concludes with “From Behind The Curtain,” in which she describes the town where she is living. Interestingly the asylum is mentioned here as well: “There are three corners that encompass it all/The asylum, the pub, and the Catholic church.” The song is a letter, and at first it seems that we are its recipients. But then we get some startling details of the person she is writing to, the person we have already aligned ourselves with, so the information comes as a jolt. “I know your father shot himself and you were not told.” The song grows in power from there. “The hills are not on fire tonight, but the sky is/After the lavender ends/From behind the curtain.”

CD Track List
No Summer is scheduled to be released on July 24, 2020 on Free Dirt Records.
Posted by Michael Doherty at 9:30 AM