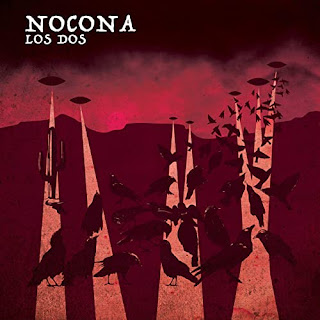 I saw Nocona perform several years ago at a Kinks tribute here in Los Angeles, and fell for them immediately. The band released its debut album in 2013, and then in 2015, released Long Gone Song, which was made available on vinyl. And though it has maybe taken a little longer than we’d hoped, the group has now followed that with a new studio album, Los Dos, featuring all original material, written or co-written by Chris Isom. The music here has its own sound and style, but is influenced by rock, country and folk, and even psychedelic rock. The band is made up of Chris Isom on lead vocals and guitar, Adrienne Isom on bass and vocals, Justin Smith on drums and vocals, Elan Glasser on harmonica, Xander Hitzig on fiddle, and Dan Wistrom on pedal steel guitar. And joining them on this release is Carl Byron on keys. Carl Byron is one of those musicians who seem to be everywhere, and yet every project he chooses to be a part of turns out to be something special, often something extraordinary. Such is the case here with Los Dos.

The album opens with “Stabby Mike,” which has something of a folk sound at the start, but with a raw and powerful vocal performance. It is when this one kicks in that I start to really get excited. There is a fire there, pouring into the veins of these musicians. You can hear it in those vocals, and in that sense that things could explode at any moment. It may be some form of country, but this is music at the edge. And check out these lyrics: “You know seeing is believing, any damn thing you’re told to believe/You got your money and the weekend/A little hatred to defend and stabby mike wants it/A little bit louder/And just a little more power/No, I can’t hear you crying underneath the crankcase, and Napoleon's dumb face.” That’s followed by “Chasing Your Shadow,” which has a folk sound as it starts, and some striking opening lines: “There’s a halo trapped over your head burnin’ fiery red now/And you’re tired of just tempting the dead morning, noon and night now/And the words that you said when you thought you’d be here forever.” But again, you know that things could turn crazy, and so when things actually get sweeter, it is a surprise. There are some pretty harmonies. And then bang, the drums pick things up and the track becomes a lively country number, a mix of light and dark vibes that keeps us excited. I love that work of fiddle. Then “Free Throw” has a country rock sound, a bit of a southern rock flavor. The line “I’m just strumming on my old banjo” caught me by surprise and made me laugh aloud, referring as it does to “I’ve Been Working On The Railroad.”

“Chester” wastes no time, but bursts in like a freight train powered by cocaine and dynamite. This track is a hell of a lot of fun, and I love that harmonica. “Get a little older every day, but you know that I ain’t dead yet.” Right on! That’s followed by “Tabernacle Woes,” which has a haunting and beautiful sound from the start, taking us into an eerie and strange landscape. “And electric eyes rip out your soul/Lines of lightning down those roads/Fear and love and death down below/Fear a god don’t feel the gun as it lays you low.” Then “Never Come Back” has a gentle vibe when it begins, though the lyrics are anything but, with lines like “Slit your throat for fun/Kick your dog for thrills.” I love how this band can surprise you with its lyrics, and with the direction any given track might take. “Make sure my straitjacket ain’t stained” is another surprising and unusual line, and yet another example of why I love this band. “And I know you will never come back/You’re too far down to ever imagine that/And the light from the morning sun/Has got you on the run.” This one features more nice work on fiddle, helping to set the tone, and some good stuff on guitar and pedal steel as well.

“Post Apocalyptic Blues” takes us to some odd honky tonk bar at the edge. There is even some crowd noise at the beginning, and then the song begins, garnering a bit of applause, and throughout the song we hear glasses clink. I’m just glad that after the apocalypse, there is still good music. That ought to help with these goddamn blues that I have trouble shaking. This track mentions a straitjacket too, and it features more good stuff on pedal steel. I also completely love the work on keys. By the track’s end, it has become one of my favorites. “Everybody back downstairs” someone shouts at the end. Uh-oh, trouble! That’s followed by “Too Much To Lose,” a good, energetic rock and roll number. Then “Unseen Hand” has an edge, a sense of danger, a touch of anger. Something is going to go down, and we’re going to be right there to witness it. That’s the feeling you get listening to this track, and the harmonica seems to confirm things are going to explode. “There ain’t no use in your hiding/There ain’t no hiding where you stand/And the wave that you’ve been riding/It’s going to come crashing.”

“Old Bones” begins with a good groove. And then, once again, the band surprises me with the track’s opening lines: “You know the fields will be on fire before too long/It don’t matter what planet you might be on/It don’t matter if your mind is gone/And it sure as hell don’t matter what goddamn side we’re on.” And then, holy shit, is that a reference to Cthulhu I’m hearing? Okay, this ol’ RPG-playing, horror-loving boy is in heaven. And that is before that fantastic work on harmonica. Then “Ace In The Hole,” the album’s final track, begins softly on acoustic guitar, some pensive, lonesome sounds. “We ain’t got nothing/And nowhere to go/Time just flies/Out of control.” Indeed. But that last line is followed by “Still we keep on.” And isn’t that the truth? This is a strong and interesting song to conclude the album.