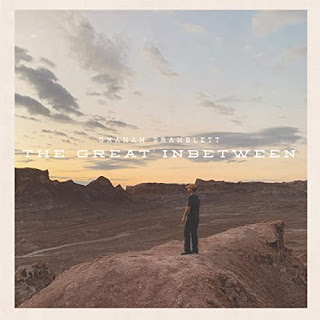 Graham Bramblett is a singer and songwriter based in Nashville. He released his first album, Under The Lights, in 2016, and followed that a couple of years later with Standard Harmony. His new release, The Great Inbetween, is an EP containing all original material, written or co-written by Graham Bramblett. Joining him on this disc are Ken Wilson on steel guitar, Andrew Golden on trumpet, and Elliott Blaufuss on guitar and keys. Providing the backing vocals are Sarah Morris, Kensie Coppin and Davis Corley. The music has a great stripped-down sound, but the vocals lose nothing of their power or their edge.

I was in kind of a bad mood when I put this disc on the first time (a fairly normal situation these days, eh?), and it was approximately a minute into the first track, “Tom T. Hall T-Shirt,” that my mood began to lift. There is something delightful about the honest, raw, loose sound of this song, particularly the vocal performance. Plus, there is something ridiculously innocent and playful about the song’s main line, “Walking downtown in my Tom T. Hall T-shirt.” For those who might not know, Tom T. Hall is a songwriter and performer, possibly most well known for writing “Harper Valley P.T.A.” (though I prefer his “I Like Beer”). But the moment when I totally fell in love with this release is when Graham Bramblett sings “Stomp, stomp” just before the song kicks in. My bad mood was completely gone at that point. That’s followed by “Rain On The Roof,” a song with a mellower, sweeter tone, this one written by Davis Corley and Graham Bramblett. There are some good lines, such as “That lightning won’t steal our thunder.” The line “You and me sipping clouds in our coffee” of course brings to mind the phrase “clouds in my coffee” in Carly Simon’s “You’re So Vain” (which I always thought simply meant the reflection of the sky in the liquid). This is a love song with a great deal of appeal, both in its sound and its mood, as well as in the message it conveys. It’s about lying next to someone and listening to the rain on the roof. In this time of isolation and fear, we are often limited to the company of just the person we live with, and maybe at times it feels like that’s not enough. But listening to this song, we know that it can be enough, that these simple and natural moments are where the real beauty is, where life is. Adding to this track’s beauty is the harmony vocal work.

“Stickers,” also written by Davis Corley and Graham Bramblett, is about how something we feel or think in the moment might not remain permanently true or important to us, leading him to sing, “I don’t put stickers on my car.” I don’t see a lot of bumper stickers anymore, so perhaps a majority of people feel that way. “I’ve lived enough to know I’ll change/This way it stays good as new/No dirty, gummed up residue.” It used to be that nearly every car had at least something to say, right? In this song he also sings that he has no tattoos. “It hurts like hell and don’t come cheap/And love ain’t always permanent.” But he then admits that once there had been a tattoo there, a name, which he then had to pay to have removed. What a beautiful and sad way of describing the need to divest oneself of the memories of a relationship, of a person. There is something sad also in acknowledging or believing that nothing is permanent because of the passing of earlier relationships, this idea of entering a new relationship with the thought that it too won’t last. Yet you might find something positive here as well, in the idea of a brand new start. That’s followed by “The One That I Want.” This one is fun, with a cheerful rhythm, and it provides the EP with its title in its opening lines: “Oh, the one that I want, she don’t want me/And the one that I don’t, oh, she wants me/So I sit at the bar with a stone in my heart/Sinking in the great in between/Leaving me lonely, leaving me lonely.” And then halfway through, we get some bright work by Andrew Golden on trumpet, making the song even more enjoyable. Plus, this track has a cha-cha-cha ending.

“What Do You Do” has a mellow, pretty vibe right from its start. This song has a lonesome sound as well, and is about memories and the inability to move on, about a relationship that has ended but hasn’t quite gone. “Looks like the rain’s on time/Coming down to remind me/I’ll be alone tonight/I’m looking hard, but can’t find it/That silver lining/There ain’t no good in goodbye.” These lines also stand out: “Those pictures you’ve been erasing/They needed replacing/You sure look good in them now.” “What Do You Do” was written by Kelli Johnson and Graham Bramblett. The EP then concludes with “You Can’t Dance,” a playful number with a strong rhythm on guitar, about going out to a bar to meet a girl. With those lines about “with your hands in your pockets,” this song reminds me of old recordings of the Grateful Dead performing “Turn On Your Lovelight,” when Pigpen would get on his “Take your hands out of your pockets” rap. And though it includes that “shelf”/“self” rhyme, I do dig this track. As it goes, the track adds crowd sounds in the background, as it seems to become a live track, and there is applause at the end. “You Can’t Dance” was written by Amanda Williams, Taylor Lewis and Graham Bramblett.

CD Track List
The Great Inbetween was released on July 17, 2020.
Posted by Michael Doherty at 8:05 AM