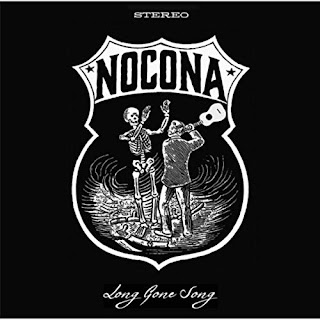 A few years ago, Jay Souza organized a tribute to The Kinks, and at that gig I was turned on to a couple of bands I hadn’t previously heard. One of my favorite groups that night was Nocona. They have a new album coming out soon, so it seems like a good time to give a listen to their 2015 release, Long Gone Song, particularly as it is available on vinyl. I get so much more excited opening a record than a CD. There is something still magical in that moment when you put a needle in the groove of a new record, that moment just before the music starts when maybe you’re not sure what you’re going to hear, or hell, even when you know exactly what you’ll hear. Records also demand more of your attention, require more of a commitment, when you listen, so you’re more involved. And this album opens up like so many records of my youth did, offering more photos inside. And the label at the center of the record has a classic look, in black and gold. Everything about it feels right. But of course it’s the music that matters, and this album is excellent from it’s opening track to its final tune. All the songs are originals, written by Chris Isom. The band, by the way, is made up of Chris Isom on vocals and guitar, Adrienne Isom on guitar and vocals, Annie Rothschild on bass and vocals, Justin Smith on drums, and Elan Glasser on harmonica. There are also a couple of special guests on certain tracks.

The record opens with its title track, “Long Gone Song,” a fast-paced, raw, rocking gem with some good, powerful work on harmonica. This tune moves along at a good clip, and we get caught up in its momentum. These guys aren’t kidding around, but burst out of the speakers into our homes, our lives, announcing themselves and making themselves at home, drinking whatever they might find in the cabinet or refrigerator. And check out these lyrics: “Whiskey and willow, love and destitution/A little schizophrenic mental pollution/Ghosts in the attic, the trees where they stand/You know the beast ain’t nothing but a man.” That’s followed by “Toothless Junkie,” which has a slower groove, with a strong bluesy element. The “I ride around town like a fucking asshole” line makes me smile. And the song’s final two lines seem like a playful comment on the band’s sound: “Well, Nashville don’t like my soul/Tell me something I don’t know.”

“All The Victories Of The World” has a sweeter, gentler sound at first, but this song still certainly has bite. Plus, it features a strong vocal performance, at times taking me back to my youth, to certain 1970s rock tunes. There is something big about this song, you know? Something larger than us, the way music felt to me when I was a kid and everything was new. “Watching your life implode/Getting your ass kicked at the rodeo/Someone’s got to find out/Might as well be you and all your doubt.” There is also a strange beauty to this song. It’s one I find myself wanting to listen to over and over. Carl Byron, a musician I’ve learned to pay close attention to, joins the group on keys on this track. That’s followed by “Beelzebub Is Still The King,” which has a more easygoing groove at the beginning. “When you’re sleeping/When you can’t remember your dreams/In a universe that’s so obscene.” It takes on a country sound, thanks to Greg Leisz’s work on pedal steel. Carl Byron is on keys on this track too. Then “Knives & Cologne” closes out the first side. There is this wonderful moment when this song kicks into a different gear; something clicks, and then bam, we suddenly get this fantastic instrumental section with a strong 1960s vibe. The whole song is cool, but it’s that moment that I keep returning to.

“Beverly Hills Blues” begins with a steady, strong beat almost like it’s going to become some standard rock song, but don’t fear, there is nothing standard about this band. Sure, there is a bit of a pop feel to this tune, but also an unusual timeless vibe. Partly it’s the vocals, which feel like they’re coming from a slightly altered reality. “And when you’re underwater, could you stay/For just another minute or two.” This track features a very cool, vibrant instrumental section, with an engine roaring to life, and more wonderful work from Carl Byron. That’s followed by “It’s Just,” a great dose of outlaw sounds. You know, some blues, some country, but a lot of raw and powerful energy, with cool stuff on harmonica and a good rhythm both on drums and to the vocal line. This song is like a road trip where your vehicle is on fire and that detail just seems to attract birds of prey that follow at a less-than-respectful distance, eager to see what will befall you. And how are things going to turn out? Even as your tires burst into flames, you’re in control, so all is well.

“Ahh Lovey” has such a cool vibe. “This ain’t the first time I’ve gone without sleep.” Oh yes, we’re entering that strange territory where sleep is a distant, vague concept, and something else is in control. This group sounds like it’s riding in from the desert to give us some information and thrills, get us dancing a bit, then leave us branded and ecstatic, if not tipsy and with a reality blurred by snake poison. “Prehensile Soul” seems to want to take us down a darker path at first. “Why won’t you believe? Why won’t you believe?” I believe, and surrender to the insistent beat, which hypnotizes and becomes my pulse. The record then concludes with “Outside The Lines.” This one is just a fucking delight right from the moment it starts. Its opening lines are “Nothing is heavy/The world is just putrid.” And of all the songs on this record, this is the one that makes me think of The Kinks, particularly the vocals. Plus, both Greg Leisz and Carl Byron join the group again on this track. Yeah, it is one of my favorites. But really, this entire album is excellent.

Side One
Side Two

Long Gone Song was released on October 2, 2015 on Henrietta Records.
Posted by Michael Doherty at 10:00 PM