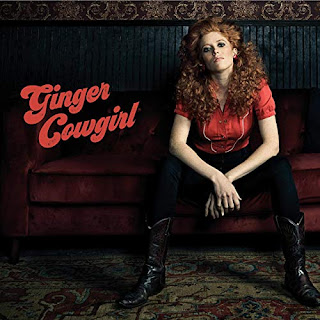 Ginger Cowgirl is a group based in Nashville that plays its own special brand of country music, taking inspiration from several other musical styles. The group recently released its self-titled debut EP. Interestingly, this disc features two distinct bands. The first three tracks have Bob Britt on guitar, Justin Schipper on pedal steel, Keio Stroud on drums, and Dave Roe on bass. The other three tracks feature Paul Sgroi on electric guitar, Danny Muhammad on pedal steel and acoustic guitar, Joe Reed on bass, and Toby Caldwell on drums. The one common element is vocalist Stacy Antonel on vocals, who also wrote most of the EP’s tracks.

The opening lines of “6 Weeks In Nashville,” the disc’s first track, are kind of delightful and playful, and also feel honest, personal: “Six weeks in Nashville/I ain’t got a gig yet/I’ve got folks on the west coast/Wondering if I’m big yet.” Of course the main line also has a playful and humorous quality: “It’s a drinking town with a music problem.” And how could I dislike a song that mentions Guinness? This track also boasts some nice work on guitar. The line “And every day I’m swinging between hope and desperation” is about trying to make it in the music business, but it could apply to basically whatever endeavor you’re attempting. That’s followed by “It Was Love,” which has a sweeter, pleasant country vibe with more nice work on pedal steel. There are also plenty of good lyrics, such as these lines: “One final round/Of the fight you knew you’d never win.” There is something so sad about the lines “It was love/It just wasn’t meant to last,” although they are delivered with acceptance, even fondness. “I’m Gone” is a truly pretty and yet powerful country number, the opening lines of which refer to being a musician: “I’m tired of writing songs about you/I’m tired of being wrong about you.” I love her vocal delivery. I laughed out loud the first time I listened to this disc when she sang “Mamas, don’t let your sons be assholes.” Good advice, really. That line caught me by surprise, which I appreciated. This track also features more wonderful work on pedal steel.

This Nashville group offers two songs on this disc with the city’s name in the titles. The first was the opening track. The second, “Nashville,” has a sweet, appealing sound, particularly in the vocal line, and features some nice percussion. “Nashville got me hooked on country music/It also got me over, it also got me over, it also got me over you.” That’s followed by the album’s only cover, which is actually two covers, both with the same song title, “Crazy.” First, we get a cool, jazzy rendition of Willie Nelson’s “Crazy,” with an absolutely wonderful vocal performance by Stacy Antonel. And then Ginger Cowgirl delivers a good version of Gnarls Barkley’s “Crazy,” with the group transitioning seamlessly from one to the other, going from admitting “I’m crazy for feeling so lonely” to asking “Does that make me crazy?” At the end, they return to the Willie Nelson song. It’s a cool idea combining two songs of the same title. I always thought it would be fun for a band to do a medley of songs titled “Let The Good Times Roll.” There are a lot of them. It could take up a whole set. The EP then concludes with “Douchebag Benny,” a fun, swinging number, featuring more delicious work on pedal steel and guitar. “He told me straight that he was looking for a real romance/But then he told me who he’d have if he got the chance/Well, he told me that his dream/Was a girl still in her teens.” Those lines make me think of at least a couple of real douchebags who have been in the news lately – Jeffrey Epstein and Donald Trump. By the way, I dig that bass line.
CD Track List
Ginger Cowgirl was released on June 7, 2019.
Posted by Michael Doherty at 10:24 PM