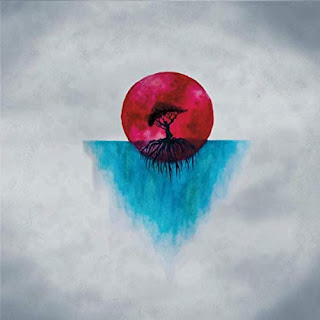 Potter’s Daughter is a group led by pianist and vocalist Dyanne Potter Voegtlin, with Amit Chatterjee on guitar, Randy Crafton on percussion, Ian C. Voegtlin on guitar and electronic wind instrument, and Walter Sitz on drums. Last year they released their debut full-length album, The Blind Side, an album combining jazz and rock elements to create an interesting and at times beautiful progressive pop sound, with several instrumental tracks. Now they are following that with a new single, “Blood And Water,” which finds them partnering with special guest vocalist Annie Haslam, whom you likely know from her work with Renaissance. The single, which is being released on both vinyl and CD, contains two versions of the song “Blood And Water,” written by Ian C. Voegtlin and Dyanne Potter Voegtlin. The label on the record contains no writing whatsoever, but rather the same cool artwork of a tree against a red sky on both sides. The CD, however, labels the tracks.

The first is “Blood And Water,” which has a strangely pleasant electronic sound to start, then soon kicks in. When the vocals begin, there is an otherworldly folk vibe to them, which is wonderful. “My heart’s made of blood and water/My bones are of sticks and of stones.” And check out these lines: “From you, I’ve learned how love’s meant to be/I’m spoken and broken and free.” Then, more than halfway through, there is a pretty vocal section, before the song goes into a more progressive rock direction led by guitar. The second track is titled “Blood And Water Revisited,” and this version begins on piano, which is the driving instrumental throughout the track. Both versions are good, but I think I actually prefer this second one, which has a glorious classical vibe.

Blood And Water is scheduled to be released on both vinyl and CD on August 8, 2019.
Posted by Michael Doherty at 4:12 PM