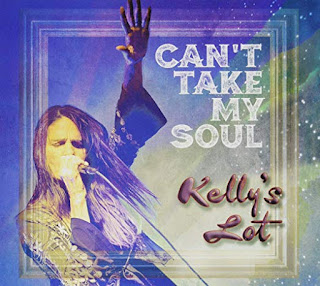 The first Los Angeles band I saw perform after moving to this city was Kelly’s Lot. This was in the late 1990s, more than twenty years ago. Bugger me, how time gets away from you. But Kelly’s Lot has continued to produce great blues music, sometimes venturing into other realms as well, as they did on their 2012 release Plain Simple Me, but essentially unruffled and unimpaired by the passage of time. Hell, the blues is eternal, right? And Kelly’s incredible voice has something of that eternal quality to it. That power comes from something unaffected by time passing; it tears through time, combining youth and immortality to create a force that the grim reaper can’t touch. This music is alive. It is thriving. You can hear that clearly on the band’s new album, Can’t Take My Soul, the title itself a little jab at death and its inability to hold dominion here. The material is all original, written by Kelly Zirbes and Perry Robertson. The band has gone through several changes over the years, and is currently made up of Kelly Zirbes on vocals and acoustic guitar, Perry Robertson on guitar, Matt McFadden on bass and Mike Sauer on drums. There are also several special guests on various tracks.

The album gets going with “All I Ever Want Is The Blues,” a blues tune that boogies and rocks. There is a lot of joy here, and isn’t that something, how the blues can make you so damn happy? It’s been said many times before, but still it strikes me, that seeming contradiction. This song is also a love letter to the blues, calling out some famous artists of the genre by name, folks like Muddy Waters and B.B. King and Etta James. There is some really good work on electric guitar too, particularly in the second half. That’s followed by “All Hope Ain’t Lost,” which has a more serious blues sound, with a nice rhythm and some cool sounds on organ. That’s Bobby Orgel on keys. This one begins with some of the usual woes heard in the blues, such as “Times are tough I hear too many say/Greed and money getting in the way.” But then the song turns to let us know “All hope ain’t lost.” And the way Kelly repeats that title line, giving it more power each time, we are all feeling optimistic before long. Her voice speaks with such confidence, such knowledge here, as well as power, that we can’t help but believe. “Don’t give up,” she tells us, something a lot of folks need to hear these days when things have become quite dark out there. And Kelly’s Lot addresses that darkness in the line “Ain’t nothing good about it/When you build a great big wall.” I love and appreciate this song.

Kelly gives a deliciously varied vocal performance on “Alyssa,” and I dig that rhythm, as it moves us back and forth. “She was never behind, but one step ahead of the blues.” This one offers some advice and a reminder: “Take a deep breath and throw away your fears/‘Cause it will all be gone before you know that you’re here.” Ah, the ephemeral quality of life, of everything, something we need to keep in mind so as not to let little things destroy us, but not to keep in mind so much that we fall into despair or apathy. Then “Woe Is Me” has such a ridiculously cheerful sound and vibe, something you might not expect from its title. This is a song about dealing with someone who is down all the time, and how it affects you too. It is so difficult to pull someone out of his or her gloom, and these days it proves more difficult than usual. Perhaps this song will work to that effect, as it is a lot of fun, with a bit of a Cajun vibe. Eddie Baytos plays both accordion and washboard on this track. The album then takes another turn with “Safe And Warm,” which has a sweeter, beautiful sound with a country vibe. Kelly’s voice sounds so smooth at moments. We are so used to that tremendous raw power that she seems to call forth effortlessly, that it’s a delight when she changes gears and calms things down a bit. But don’t worry, she finds moments to allow that power to burst through the surface here too. This one ends up being one of my favorite tracks of the album.

Jean-François Thomas joins the band on vocals for “Rise Up (Lève-Toi),” their voices combining to an interesting effect. Jean-François has a wonderfully raspy and rough quality that makes Kelly’s voice even at her rawest and wildest sound so smooth. Rob Zucca plays lead guitar on this track, and delivers some excellent stuff. Then “Broke Myself” comes on strong, with a good tight rhythm. I seriously dig that bass line. Kelly’s vocals here begin with a rather intimate sound, but then of course rise and have plenty of attitude. “But nothing compares/To what a heart can do/I broke myself loving you.” And when she sings that she may be in trouble, we believe her, because there is a wild, unhinged quality to her approach here, which works so well. Frank Hinojosa adds some wonderful touches on harmonica on this track, the instrument like a witness to the pain. That’s followed by “Let It Breathe,” a pretty acoustic number. There is love and concern in Kelly’s delivery as she sings “There’s a light in my heart for you/Let it guide you back to me/While you’re gone/I hope you find peace of mind/And you learn to let it breathe.” This track contains another reference to walls (it’s difficult to keep from reading political meaning into such references these days), “You need to tear those walls down.” This track also features some nice stuff by Bobby Orgel on keys.

“Dirt” is a powerful song that begins with its first several lines sung a cappella. The band then eases in. This song stood out for me the first time I listened to this disc, especially lines like “When the pain makes you feel better” and “When a hand feels like a thorn/And your cage feels safe and warm.” This is an empowering and hopeful song about a serious subject. “They’ll keep you straight/When you bend/So the broken pieces can mend.” Michael Mason plays drums on this track. That’s followed by “Little Bit Of This,” an acoustic song with a sweet, pleasant folk sound. Then “Can’t Take My Soul,” the album’s title track, also begins with its first lines delivered a cappella. It soon kicks in to become a delicious bluesy country rocker, a fun, positive number, a song to get folks dancing. There is even a section with hand claps and percussion. The cheer of this track is infectious. Then we’re suddenly transported to a French café for “Mon Ami,” the disc’s closing track. What a delightful surprise, and it treats us to yet another aspect of Kelly’s vocals. Jean Paul Monshè offers some wonderful work on accordion here, and there is also a whistling section. Yes, this song is making me ridiculously happy. “Thank you for your open arms.”

CD Track List
Can’t Take My Soul was released on May 17, 2019. By the way, Kelly’s Lot is planning a special concert to celebrate twenty-five years as a blues force. The show is scheduled to take place on November 1, 2019 at The Mint in Los Angeles.
Posted by Michael Doherty at 2:04 PM