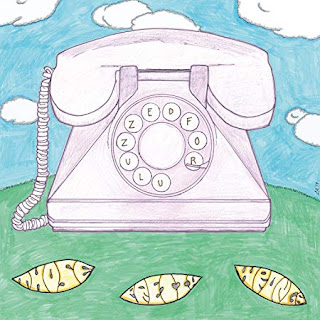 I have a passion for the works of William Shakespeare, and I find references to those works everywhere – in books, in films, in songs, and even in band names. Those Pretty Wrongs take their name from the first line of Sonnet 41: “Those pretty wrongs that liberty commits.”  Those Pretty Wrongs are the duo of Jody Stephens, whom you likely know as the drummer of Big Star, and Luther Russell, whom you probably know from his solo career (his latest album, Medium Cool, was released earlier this year). The duo put out their first album in 2016, a self-titled release. Their new album, Zed For Zulu, features all original music, written by Jody Stephens and Luther Russell. They also play most of the instruments on this album, though there are some special guests on a few tracks. The music is pop with strong folk elements and wonderful harmonies.

The album opens with “Tonight, Tonight, Tonight,” a sweet-sounding acoustic song. Its first line is “You’ve been down, down again,” and I can relate. Who can’t relate to that line these days? It seems we constantly bounce among despair, fury and disgust. Yet there is something so wonderfully hopeful about the track’s title line, “Tonight, tonight, tonight.” Ah yes, it offers the promise of something. And the way the line is delivered makes me feel that things are about to get really good. Or, hell, is it possible that they already are? The friendliness of the voice seems to indicate they are. “Close your eyes for a moment/You know you’re not alone.” By the way, this track features some special guest musicians, a gorgeous string section. Leah Peroutka is on violin, Aubrey Kessel is on viola, and Leah Gibson is on cello. The string arrangement is by Chris Stamey. “Tonight, Tonight, Tonight” is followed by “Ain’t Nobody But Me,” which has more of a pop vibe from the start, a vibrant rhythm and a bit of a 1960s feel to the guitar. “A little help is all I need.” We are all reaching out, we are all in need of some help these days. I feel that some help is sent to us in the form of songs like this one. I am still confident that music will pull us through.

This album contains a lot of excellent lyrics. From “Time To Fly,” one of the lines that stood out for me the first time I put on this album was “Of happiness with no address.” It’s an intriguing phrase. Then in “The Carousel,” lines that grab my attention include “As I lay me down to sleep/I convince myself to keep moving on, moving on” and “There’s a world out there, and I can’t make sense of it.” It certainly is difficult to make sense of the world today, particularly when truth in large part has died, and so much meaning has been lost. We can piece things together ourselves, but what has happened to our shared reality? It seems gone. One of the most interesting tracks of the album is “Hurricane Of Love.” There is something of a 1960s sensibility here, right? Like some of Donovan’s more unusual and exciting material. Anyway, this one grabbed me immediately. “It’s uncertainty that rattles me, my love.” There is some surprising and wonderful work by Jim Spake on clarinet on this track.

When “You And Me” starts, it sounds like a folk song, but when it kicks in, it shows some delicious pop sensibilities, with a bit of a paisley underground influence. The song is actually a sweet love song, with them repeating, “I’ll be there with you.” “Undertow” is a fun tune, another of the disc’s highlights, with a timeless quality and a delightful style. I dig the piano and the vocal line. Danny De La Matyr provides some backing vocals on this track. “Hey, when the tale is told/We’ll give it a chance/And risk our broken hearts again.” The album then concludes with “It’s About Love,” a timely and needed song reminding us that “It’s about love and happiness.” Check out these lines: “It’s not about walls to separate/Ways we can humiliate/It’s not about views that isolate/Or hopes and fears that suffocate/It’s not about blame or pointing fingers/It’s not about shame or pettiness.”

CD Track List
Zed For Zulu is scheduled to be released on September 6, 2019 on Burger Records, and apparently will be available on CD, vinyl and cassette (really, cassette, is that right?).
Posted by Michael Doherty at 10:43 PM