Grateful Dead Meet-Up At The Movies 2019 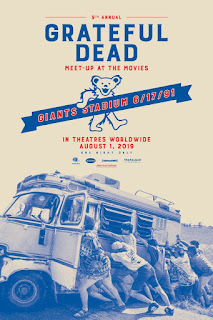 Today is Jerry Garcia’s birthday. He would have been, what, 77 years old. To mark the occasion, the annual Grateful Dead Meet-Up At The Movies is happening tonight. Every year, one concert is chosen to be shown in movie theaters across the country (and now in other parts of the world as well), and this year that concert is one I attended.

A friend and I drove from Massachusetts down to New Jersey to see the band play a two-night stand at Giants Stadium in June of 1991. The first show was the 16th, and my friend and I somehow got split up before the show started. No matter, I figured, you always make plenty of friends at Dead shows. But the band was just not on that night. The music felt tired and routine. There were no moments of magic. I actually went and sat down in a section sort of behind the stage, where nobody else was. Sitting down at a Dead show? Right, it was weird. Anyway, after the show, I met up with my friend at my van, and I didn’t want to say how disappointed I was, just in case he had a fantastic time. But soon it was clear he thought the show was terrible too. In fact, we considered giving away our tickets for the next night and just driving home. It was that bad. We wondered if this show signaled an end to the band.

Of course, we thought better of it. After all, we were already there, and neither of us was up for a long drive that night. The next night, June 17th, we got split up again. I decided I wanted to be on the floor, and so lowered myself over the wall at the back of the venue. Moments later a light rain began to fall, and the tarp on the floor became a slip-and-slide. A bunch of us were having a grand time sliding around, and then the band came out. And immediately there was magic in the air. We could feel it even before the band played its first note. And once they did play that first note, the place erupted in joy. They were opening the first set with “Eyes Of The World.” It seemed to me that the band was determined to make up for the previous night’s dull show. And they certainly did! This was one of the best concerts I ever attended. And this is the show that is being shown in theaters tonight. I am seriously excited to revisit this concert.
Posted by Michael Doherty at 10:50 AM