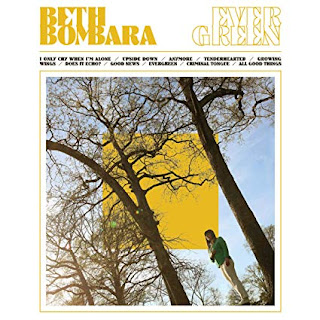 Beth Bombara is a singer and songwriter based in St. Louis, Missouri. She has been performing for more than a decade, and has released several CDs during that time. Her new album, Evergreen, features original music, most of it written by Beth Bombara and Kit Hamon. The music is combination of pop and rock, but with some folk and country elements, and a singer/songwriter’s sensibilities and attention to lyrical content. The band backing her includes Samuel Gregg on electric guitar and backing vocals; Mike Schurk on drums and percussion; John Calvin Abney on piano, organ and harmonica; and Kit Hamon on bass, backing vocals, percussion and synthesizers.

The album opens with “I Only Cry When I’m Alone,” a good pop song with shades of Aimee Mann in the vocal style. Check out these lines, which begin the song: “Been holding this inside/Try to keep my head high/Breaking down behind the door/When I can’t hide this anymore.” I have a feeling this song is going to speak to a lot of people. Despair and depression abound these days, and I feel one of the best instruments to battle these things is music. Perhaps I’m foolish, but I honestly think songs like this help a great deal. That’s followed by “Upside Down,” which features some nice work on electric guitar and a good bass line. Beth Bombara sings, “Leave behind your could’ve beens/And we’ll get going somewhere else.” It’s difficult, though, isn’t it? The past and the mythical present are always with us, and it’s hard to refrain from comparing our reality to what we believe our reality should be. “Upside Down” was written by Beth Bombara, Seth Porter and Kit Hamon.

One of my personal favorite tracks is “Anymore.” I bet we can all think of an occasion or two when we want to sing – or shout – these lines: “I didn’t choose your game/And I’m not gonna play anymore.” This song features a sweeter vocal performance, with a bit of country to the style at times. And check out these lines: “Blinded by the unseen/Am I losing my mind?/Watch an elusive dream/Disappearing on the horizon.” Then “Tenderhearted” has more of a country flavor to the music, and a more positive vibe. “It’s never gonna be perfect/But I’m still gonna try.” Also, I dig that harmonica. “Growing Wings” is another of my favorites. I like the work on bass and on keys, but Beth’s vocal performance is really what makes this track special. It’s a powerful performance, one that is beautiful and emotionally engaging. And she has plenty of excellent lyrics to sing, such as these lines: “Nothing lasts, and that’s okay” and “Try not to hold on too tightly/‘Cause the strain ain’t gonna do you no good” and “All this progress, but nothing new.” Man, that last line really feels dead-on, doesn’t it?

Another of the disc’s highlights is “Good News,” which has a rock feel and a really cool bass line. Lines that stood out for me the first time I listened to this album were “Wasn’t it enough to feed your ego/Without feeding my despair?” Her vocal performance here has something of an edge. “Why can’t it be good news?/I need some good news.” Yes, we all could use some good news. Every day I read the news to see what else has gone wrong, what new racist shit Donald Trump and his Republican hacks have uttered, what new environmental disaster has occurred, how many more have lost their lives to gun violence. It seems we are just completely fucked as a nation. We need some good news, and we need it immediately. “Good News” is followed by the album’s title track, “Evergreen.” Maybe I’m mad, but the vocal delivery of the first line reminds me of Olivia Newton-John’s “Xanadu.” But then there is something of a country thing to this track as well. “When the chaos is taking over/You said letting go is easy.”

“Criminal Tongue” is another powerful track, more of a rock tune with a bluesy edge at times. There is a play on one of Shakespeare’s most famous lines, with Beth singing “All the world’s a cage.”  The disc then concludes with “All Good Things,” which was written by Kit Hamon. The first lines are “Do you get the feeling/That everything is broken/And every word that’s spoken/Is lying through its teeth.” Yup, that’s about the size of it. This is yet another of my favorites, and is one I think basically everyone I know (and everyone I would want to know) is going to appreciate. It has more of a raw and immediate sound, her vocals supported by piano. This song directly addresses the horror occupying the White House in lines like “If this is great again/Then where did we begin?” This is such an excellent song, and it nearly has me in tears today. In the line “All good things must end” could she be referring to democracy, or to our country itself?

CD Track List
Evergreen is scheduled to be released on August 9, 2019. By the way, in addition to CD, it will be released on yellow vinyl. I admit, I am a sucker for colored vinyl. Who is to say music can’t look cool as well as sound cool?
Posted by Michael Doherty at 6:49 PM