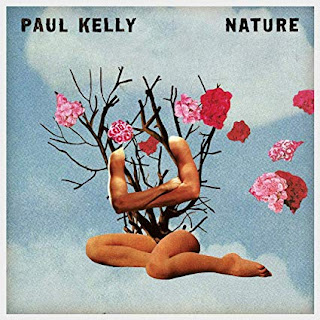 I look forward to each new release from Paul Kelly. Somehow this guy manages to put out phenomenal albums year after year, and his new release, Nature, is no exception. With mostly original material, this disc features songs that you’ll love immediately. Joining Paul Kelly on this release are Dan Kelly on various guitars, Ashley Naylor on electric guitar, Bill McDonald on bass, Peter Luscombe on drums and percussion, Cameron Bruce on keys, as well as some special guests on vocals and strings.

The album opens with “And Death Shall Have No Dominion,” which has a positive sound and vibe, something I think a lot of folks will appreciate, particularly as this country seems to be sinking into fascism. This track builds wonderfully. There is joy and excitement, and the song is pulsing with Life, you know? “Though they go mad they shall be sane/Though they sink through the sea they shall rise again/Though lovers be lost, love shall not.” The lyrics are from a poem written by Dylan Thomas. This, of course, isn’t the first time Paul Kelly has set a poem to music. He did it just year on Life Is Fine, the album’s title track being a Langston Hughes poem. And, as you might already be aware, he set some of Shakespeare’s sonnets to music on 2016’s Seven Sonnets & A Song. Vika Bull and Linda Bull provide harmony vocals on this track. This is a beautiful and strong way to start the album. It is not the album’s only track to feature the words of a famous poet. “With Animals,” one of my personal favorites, features lyrics adapted from a section of Walt Whitman’s “Song Of Myself.”  In this song, Paul Kelly sings “I think I could turn and live with animals,” a line that makes a lot of sense in our dark political and social climate. A few days ago I watched a video about a woman who was saved from a possible shark attack by a humpback whale, and I thought, “Wow, animals are more human than humans.” Anyway, the behavior of many people these days makes the idea of living with animals quite appealing. “They do not lie awake in the dark and weep for their sins/They do not make me sick discussing their duty to God/Not one is dissatisfied/Not one is demented with the mania of owning things.” Maddy Kelly and Memphis Kelly provide backing vocals on this one.

“With The One I Love” is more of a rock tune, and an unusual kind of love song. “I might be wronged by the one I love/But I don’t care what’s bad or good/Or what I shouldn’t or what I should/I’m gonna go with the one I love.” Dan Kelly and Cameron Bruce provide the backing vocals on this track. Sometimes you just need to say the hell with everything, I’m going to be with the person I love. After all, as Paul sings in this song, “Pretty soon we’ll all be dust.” Then “A Bastard Like Me” begins more in the folk realm, then builds from there, drawing a vivid and sharp character, a character of defiance. It has something of a strong, dark vibe, and again, good use of backing vocals from Dan Kelly and Cameron Bruce. “Little Wolf,” which seems to emerge from the end of “A Bastard Like Me,” also begins in darker folk territory and features moving touches on violin by Xani Kolac. “A bitter winter wind’s been at me all day/Oh, I got the blues more than I can say.” Vika Bull and Linda Bull provide harmony vocals. This is a strange and effective track.

“Bound To Follow (Aisling Song)” is another of the album’s strongest, most compelling tracks, tapping into an ageless magic realm or sense. This one features Kate Miller-Heidke joining Paul Kelly on vocals; she provides the voice of the siren. The entire band helps to create a strong impression of this dream-like landscape. “All night long I trailed, following her shape/My one and only wish – to look upon her face/Though I seemed to be the hunter/I was much more like the prey/And I was bound to follow.” That’s followed by “Seagulls Of Seattle,” which has a gentle, sweet folk sound that I love. Paul’s vocals have a friendly tone. “And looking west I raised you up/All sleepy from your bed/You were putting on the coffee pot/Brushing bad dreams from your head.” Then “Morning Storm” has a more serious folk vibe, with some of its lines referring to other literary work. For example, the clause “Stop all the clocks” in the line “Stop all the clocks and burrow down low” is from an incredibly depressing poem from W.H. Auden (you might remember John Hannah giving a great reading of it in Four Weddings And A Funeral). There is also a reference to Hamlet in the line “Bound by you, I’m a king of infinite space” (Hamlet tells Rosencrantz and Guidenstern, “I could be bounded in a nutshell and count myself a king of infinite space”). Maddy Kelly and Memphis Kelly provide the beautiful humming on this track. This is another of my favorites.

“Mushrooms” has a sweet, intimate, friendly vibe. It is also another poem set to music, this one written by Sylvia Plath. The poem/song is – on its surface – about mushrooms, but is really about women, and women’s rights. I love the last line, “Our foot’s in the door,” which Paul repeats. Then, as the song fades out, he repeats the earlier line, “So many of us!” That’s followed by “The River Song,” which has probably my favorite vocal performance on the album. Plus, this beautiful song benefits from the presence of a string quartet. Lisa Stewart and Myee Clohessy are on violin, Stefan Duwe is viola, and Anna Martin-Scrase is on cello. The image of the cello (an instrument I love) also finds its way into the song’s lyrics: “She’s tossed off our sheet in the night/I’m sleepless but feeling fine and mellow/Watching her in yellow light/Her back a lovely, breathing cello.” What a wonderful song. Then “God’s Grandeur” has a kind of happy, jaunty vibe from the start. This track is also a poem set to music, the poem written by Gerard Manley Hopkins. “And for all this, nature is never spent.” Ah, now that is an optimistic thought I want to hold onto as our current administration seems bent on destroying the environment. This track features pretty backing vocals by Vika Bull and Linda Bull. The album then concludes with another poem set to music: Philip Larkin’s “The Trees,” with Alice Keath joining on harmony vocals. There is an optimism here too, with images of renewal and rebirth, even as the subject is also mortality.