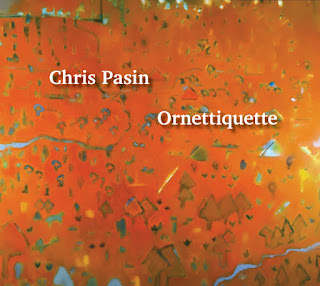 The Grateful Dead introduced me to a lot of different music and musicians, including Ornette Coleman. I was in high school when Jerry Garcia joined Ornette on a few tracks of an album titled Virgin Beauty. (When is that disc going to be re-issued, by the way? It’s been out of print for far too long.) There was a weekly Grateful Dead radio program in Massachusetts in those days, and the host played “Singing In The Shower,” and I was hooked, fascinated. What struck me then about Coleman’s music was that it was exciting and had a great deal of movement and joy to it. Accomplished trumpet player Chris Pasin pays homage to Ornette Coleman (and to Don Cherry) on his new release, Ornettiquette, covering several of Coleman’s compositions while also offering a couple of original tunes. This album follows Pasin’s 2017 holiday album Baby It’s Cold Outside. Joining Chris Pasin on this new release are Karl Berger on vibraphone and piano, Harvey Sorgen on drums, Michael Bisio on bass, Adam Siegel on alto saxophone, and Ingrid Sertso on vocals.

The album opens with a wonderful original composition, “OCDC,” written by Chris Pasin. The trumpet is the focus right at the beginning, though the bass is the instrument I latch onto early in this track. It seems to be pumping along, keeping things moving. And boy do things move on this track, the music having an unbridled, joyous feel, particularly the trumpet. There is a cool lead on bass halfway through, and this track also features plenty of great work on drums. This is a piece that breathes and slides and flies. I dig the title, using Ornette Coleman’s initials for a play on AC/DC, and also perhaps Obsessive-Compulsive Disorder Complex (or perhaps not; that might just be in my head, but no matter). It might also function as a reference to an album like Ornette!, in which all the track titles are abbreviations. Chris Pasin follows that with a piece composed by Ornette Coleman, “Jayne,” which has a bright, kind of loose vibe. I love that drumming, which has a gloriously manic feel at times, but somehow maintains enough control to drive the band forward. And the horns have a whole lot to say, some of it being delicious lunacy, an unbound excitement. Ah, Jayne is dancing on the fire escape again, dressed in leather and feathers and lights. Coax her back inside with a mesmerizing, hypnotizing vibraphone part. Yeah, that’s working just fine. This tune was named for Ornette’s wife and was included on Something Else!!!!

Ingrid Sertso joins the group on vocals for “Ghosts,” a piece written by Albert Ayler, with lyrics written by Sertso. She gives a kind of breathy delivery of the opening lines: “The night and day will pass away/But love will always stay.” The tune then kicks in with a positive sound, the vibraphone in particular having an incredibly cheerful feel on this track. There are a couple of moments when the track feels like it’s about to wind down, but then another instrument takes up the cause, keeps things going, brings us all back up again. And again, that bass is at the heart of the thing. Things get wonderfully weird like halfway through, and Ingrid returns with some kind of trippy scat. That’s followed by another of Ornette Coleman’s compositions, “Tomorrow Is The Question,” which was the title track to a 1959 release. It’s a cool, fun track, with the trumpet acting like a messenger from a distant corner of heaven, a place where joy is taken seriously and the rules get an occasional, affectionate nod but are soon forgotten. And it’s all over too soon. We then get a good rendition of “Just For You.” What, a mellower, thoughtful number? Yes. Sometimes I forget that Ornette Coleman was equally adept at writing these sorts of tunes. Not that it’s sedate; the trumpet, while having a sweeter, more romantic bent, is not completely restrained.

Ingrid Sertso returns on vocals for “When Will The Blues Leave,” providing some cool scat. I’m not sure when the blues will leave. It’s a question I’ve had on my mind for some time now. Perhaps the blues may lessen after the midterm elections. But listening to this seriously cool tune should help alleviate some of our fears and despair. Ingrid seems to communicate a lot without using many specific words. Or maybe these are words; I’m certain of very little these days. But suddenly she asks, “When, how, and where can one overcome the needs of life?” There is something magical or otherworldly about her vocal performance, which gives more power to what she is saying. Words from beyond, you understand. At the very end, she answers the question posed by the title of the tune: “Never.” Hmm. Ingrid Sertso also sings on “Lonely Woman,” lyrics that she wrote herself, setting them to the famous composition by Ornette Coleman. It’s an unusual and captivating rendition. The album then concludes with an original composition by Chris Pasin, “PTU,” a track which surprises me at times, feeling like a car ride through a bustling city inhabited by gnomes and shimmering prostitutes. Who is that beeping at me? This one is short; I feel like there is more to explore here, more to see.

CD Track List
Ornettiquette is scheduled to be released on October 21, 2018.
Posted by Michael Doherty at 4:25 PM