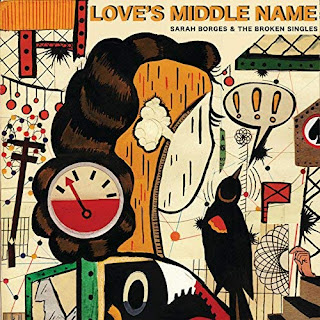 In these discouraging, disheartening and disgusting days of Donald Trump and Brett Kavanaugh, it’s a relief to hear some raw, powerful female voices. Almost regardless of what they choose to sing about. Just their presence feels like an antidote to the poison being pumped into the arteries of this country from the horrors occupying the capital. Sarah Borges provides one of those strong and joyous voices, a voice to combat feelings of despair and hopelessness. Love’s Middle Name, the new release from Sarah Borges & The Broken Singles, features mostly original material, written or co-written by Sarah Borges. The music here is good solid rock, without a hint of bullshit or artifice. There is a bit of blues, of course, as rock has always had blues at its base, and at this point in our country’s existence there is some blues in every breath we take. There is also some punk in the raw delivery, another element we can’t help but appreciate these days. The band on this album is made up of Sarah Borges on vocals and guitar; Binky on bass and backing vocals; Eric “Roscoe” Ambel on guitar, keyboards and vocals (Ambel also produced the album); and Phil Cimino on drums and percussion. Ed Arnold plays drums on a couple of tracks.

The album kicks off with “House On A Hill,” which announces itself as straight-forward rock from its opening moments. The track has a solid groove, and Sarah’s vocals remind me at times of Joan Jett. That’s followed by “Lucky Rocks,” which has kind of a wonderfully harsh edge in the guitar. Her vocals rise above the music with a great force. “I know you got places to go and people to see/Maybe one of those people could be me/I’ve been putting lucky rocks in my pocket/To make you fall for me whole-hearted.” Sarah Borges then switches gears for “Oh Victoria,” a song that has a softer, acoustic sound, but does not lack a power of its own. It is one of my personal favorites. “We are all sad souls trying to get out.”

We then get back to a solid rock sound for “Let Me Try It,” this one co-written by Sarah Borges and Eric “Roscoe” Ambel. The vocal line is interesting, particularly on lines like “There ain’t nothing that I would not be able to forgive you for/Except for making me look in the mirror if you were to walk out that door.” Though this music is largely rock, there is a country kick to her vocals. “As long as it’s good for you, I want to try it.” That’s followed by one of the album’s two covers, a really good rendition of Brennen Leigh and Noel McKay’s “Are You Still Takin’ Them Pills.” This version has a fun feel, what with the hand claps and that cool work on guitar, though the subject is rather serious. “I think they almost made us feel a little happy/I think they really made us feel like we belong/They set us working on something for an entire day/And we would talk about it all night long.” And at the end, we hear pills rattling in their bottle like maracas.

“Get As Gone Can Get” is another of my favorites. This one is pure fun, a party tune to get you dancing. It’s rock and roll with energy, particularly in the vocal delivery. The band then slows things down a bit with “Grow Wings,” putting the focus more on the lyrics, with certain phrases standing out, such as “This world is too painful” and “I’m caught between fighter and victim.” Sarah’s vocals have a certain glorious ache. “Grow Wings” was written by Sarah Borges and Sean Staples, and is another of the disc’s highlights. Then “Headed Down” opens with punk energy, something we can use these days. I appreciate the somewhat angry, insistent tone of the guitars. “Go a little farther than you really think we should/You know it’s fun because it’s a little bit dangerous.” “Girlie Book,” written by Sarah Borges and Eric “Roscoe” Ambel, has a steady, driving rhythm. “And her sister with her satin looks/She had me once, you know that was all it took/I’ve been trying to tell you/That I’ll be leaving soon/I’ll send you a postcard from nowhere/That I’ll write by the light of the moon.” The album then concludes with “I Can’t Change It,” the album’s other cover, which is more folk music at its base, though with rock elements. I love Sarah’s vocal performance on this track, the lines delivered with honesty and heart. “My one true love has gone away/What can I say/He left that day/The moon still shines a different way/What can I say/He left that day/I can’t change it/But I’m waiting patiently.” “I Can’t Change It” was written by Francis Miller.