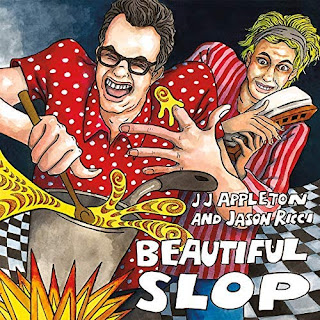 A few years ago guitarist JJ Appleton and harmonica player Jason Ricci teamed up for a blues album titled Dirty Memory. They are now following that up with Beautiful Slop, a fantastic album featuring mostly original material, songs with a great classic vibe. That comes, in part, from JJ Appleton’s use of a 1932 National Resonator. This music has a natural, real sound that I love, a sound that I’ve always gravitated toward, but a sound that feels needed especially these days when we’re all wanting to grasp some truth. Joining Appleton and Ricci is Derek Nievergelt on acoustic bass.

JJ Appleton and Jason Ricci kick off the new album with a cover of “Don’t Take Advantage Of Me,” some good, honest, lively blues with a whole lot of excellent work on harmonica and a really cool vocal performance. “Don’t think I’m weak ‘cause I’m sweet to you/Well, don’t think I’m weak, baby, ‘cause I’m so goddamn sweet to you/Well, another man, another time/Wipe that mess right out of your mind/Yes, I will.” That’s followed by “Hurt Myself,” a song with a slower, darker, more serious groove. This one was written by Jason Ricci, and features a moving vocal performance. “Well, there’s something on my mind/Makes me want to die/I don’t know why.” The delivery is both powerful and delicate. This tune also includes some howls that might remind you of Screamin’ Jay Hawkins. Yeah, it is one of the disc’s strongest tracks.

Another favorite of mine, “I Got The Feeling,” has a kind of fun vibe, with a friendly groove. This one was written by JJ Appleton. “Oh, I’ve known some dark clouds/They sneak up with the rain/They say they’re gonna love you/And then they bring the pain.” This wonderful blues song is like a ray of sunlight piercing the darkness that seems to surround the world these days. That’s followed by another song written by Appleton, “Distraction,” which has a sweeter, more intimate tone to the vocal delivery. “You’re such a distraction/You’re such a delight.” And there is a beauty and a passion to Jason Ricci’s work on harmonica. We are then treated to an instrumental tune with a strong Cajun vibe to get us on our feet. “Geaux Nuts Kids” was composed by Jason Ricci.

“Don’t Badger The Witness,” also written by Ricci, is another cool number. It begins with some nice work on harmonica, then develops an easygoing groove with a good bass line. “They say I’m up, but I feel down/They say I’m lost, but I feel found/It don’t matter what I say/You all won’t believe me anyway/I’m just trying to stick around.” That’s followed by a gospel number, “Standing In The Safety Zone,” one of the album’s covers, a song recorded by The Fairfield Four. “Brighter Days,” a slower blues number written by Appleton, promises that brighter days are coming now. Good! We certainly need them. Then “For The Very Last Time” has a delicious rocking energy, and is yet another of the disc’s highlights. This one also was written by JJ Appleton, and features some exciting work on harmonica. The album then concludes with a cover of Rihanna’s “Stay,” a song written by Mikky Ekko and Justin Parker.

CD Track List
Beautiful Slop is scheduled to be released on October 26, 2018.
Posted by Michael Doherty at 1:19 PM