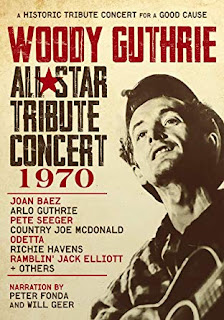 Woody Guthrie was one of the greatest and most prolific songwriters of all time. And his music is discovered and loved by each new generation. Lately, that is in part because of the protest songs he wrote about one Fred Trump, a racist real estate developer who was responsible for bringing into existence the absolute worst president this country has ever experienced. Two of those songs were included on I Don’t Like The Way This World’s A-Treatin’ Me, a Record Store Day release. Also, lately it seems a lot of people are covering Woody Guthrie’s “Deportee (Train Wreck At Los Gatos).” His music is always relevant, and it means so much to so many. In 1970, some of the country’s best folks singers paid tribute to Woody Guthrie at a special concert held at the Hollywood Bowl. Artists like Pete Seeger, Joan Baez, Richie Havens and of course Woody’s son Arlo Guthrie performed at this show, which was also a benefit to raise funds to fight Huntington’s Disease. Now the film of this concert is being released on DVD.

When the concert begins, Peter Fonda and Will Geer provide the audience with a bit of biographical information, and we see some photos of Woody Guthrie. Then the entire group performs “This Train Is Bound For Glory.” And by the entire group, I mean Arlo Guthrie, Pete Seeger, Joan Baez, Country Joe McDonald, Ramblin’ Jack Elliott, Odetta, Richie Havens, and Earl Robinson. Pretty good group, right? And the band backing these folks includes Ry Cooder on guitar and mandolin, John Beland on dobro, Chris Ethridge on bass, Gib Guilbeau on fiddle, Thad Maxwell on guitar, John Pilla on guitar, and Stan Prat on drums. Country Joe McDonald reads from a lyrics sheet, but it’s a cool rendition. Odetta is particularly awesome. (By the way, if you haven’t seen Hal Ashby’s film Bound For Glory, you should really check it out.)

Between songs, Will Geer and Peter Fonda read some of Woody Guthrie’s own words, which is wonderful and often helps put songs into context. Arlo Guthrie plays “Oklahoma Hills,” and then joins Country Joe McDonald on harmonica for “Pretty Boy Floyd.” Pete Seeger and Joan Baez perform “So Long, It’s Been Good To Know Yuh.” Joan Baez looks so serious, even when singing this rather fun tune. Country Joe McDonald, Arlo Guthrie, Ramblin’ Jack Elliott and Pete Seeger deliver a breezy rendition of “Goin’ Down The Road Feeling Bad,” with a little joke thrown in about the quality of Los Angeles water. This version seems rather short to me, but that might be because I am used to Grateful Dead versions.

Pete Seeger and Arlo Guthrie do “I Ain’t Got No Home.” I love hearing those two sing together. In the early 1980s they put out a double album titled Precious Friend, which I highly recommend. They do a few Woody Guthrie tunes on that one too. On this song, Pete sings “Now as I look around, it’s mighty plain to see/This world is such a great and funny place to be.” Then Arlo delivers a kind of rocking and funky version of “Do Re Mi,” different from other versions I’ve heard him do. He plays piano on this one. And hey, look, Joan Baez is goofing a bit! She then gets serious again for “Deportee (Plane Wreck At Los Gatos),” giving us a really nice, heartfelt rendition. Odetta follows with a cool rendition of “Ramblin’ Round.” Then Pete Seeger and Earl Robinson do “Roll On Columbia.” But maybe my favorite performance of the entire night is Richie Havens’ version of “900 Miles.” He is mesmerizing when he performs. There is so much passion in his playing.

Country Joe McDonald does a bluesy rock rendition of “Woman At Home,” which is cool. That’s followed by Pete Seeger playing “The Sinking Of The Reuben James” and then Pete and Arlo doing “I’ve Got To Know,” backed by Odetta, Joan Baez and Richie Havens. The show ends with a rousing rendition of “This Land Is Your Land,” played by all the musicians. Arlo Guthrie takes the “no trespassing” verse. I’ve said this before, but “This Land Is Your Land” should truly be this country’s national anthem. I think people should just start singing it at sporting events, drown out that other lesser song. “This Land Is Your Land” leads to a brief reprise of “So Long, It’s Been Good To Know Yuh,” and that’s how it ends.

But that is not the end of the DVD, for some bonus footage is included. The first bit is footage of the rehearsal for the concert, with Arlo Guthrie and Ramblin’ Jack Elliott offering some thoughts in voice over. We then get three more songs from the concert: a really nice version of “1913 Massacre” performed by Ramblin’ Jack Elliott, “John Hardy” done by Odetta, and “Pastures Of Plenty” played by Joan Baez.

Woody Guthrie All-Star Tribute Concert 1970 was directed by Jim Brown, and is scheduled to be released on DVD on June 7, 2019 through MVD Visual.
Posted by Michael Doherty at 9:18 PM