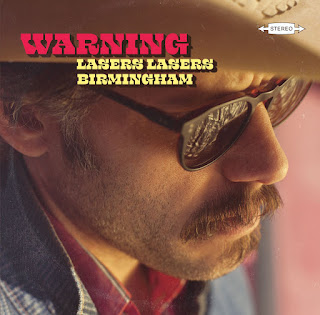 A few years ago I was turned onto Lasers Lasers Birmingham, the project of singer and guitarist Alex Owen, when Royal Blue was released. That four-track EP has a nice 1970s country rock vibe at times, and features some really good lyrics. It was the second release from Laser Lasers Birmingham, following a 2014 self-titled EP. Now Alex Owen is finally releasing a full-length Lasers Lasers Birmingham album. Titled Warning, this wonderful disc features all original material, written by Alex Owen. The music here is basically country, but something out of the ordinary in the subjects it addresses and its approach. Joining Alex Owen on this release are Jason Soda on electric guitar, acoustic guitar, piano, mellotron, organ, percussion and backing vocals (he also co-produced the album); Dan Wistrom on pedal steel and mandolin; Aaron Stern on bass; Travis Popichak on drums; Jon Nieman on piano and organ; and Eleanor Masterson on fiddle. Providing backing vocals are Sie Sie Benhoff and Davey Allen.

The album opens with its title track, “Warning,” a cool country tune with a somewhat relaxed vibe, some wonderful work on pedal steel, and a good vocal performance. “Ooh, this is a warning/The wildest of frontiers, they’re already tame/Lately feeling older/When the growing days seem so plain.” And any song that somehow gets Ernest Hemingway and John Wayne into the same line is a song I need to pay attention to. This is one of those tracks that I love more and more each time I listen to this album. It’s followed by “Perfection In 3/4 Time,” a delightful tune about being a musician. It includes all the important elements, such as traveling and weed and egos. And the line “No one’s asking for perfection” is wonderful, particularly in light of the song’s title. Like, they aren’t asking for it, but here it is. I love the humor of this song, of this music, of this band.

“After Party After Life” has a strong rhythm on bass that seems to be inspired by some classic R&B tunes, and also features some cool work on electric guitar. I love the line “‘He never knew when to quit’ is written upon my grave.” And check out these lines: “And I should join the circus/I’d be the freak in the center ring/Juggling bearded ladies/On two weeks with no sleep.” Yeah, it’s a fun tune, one to keep that party going long after last call. It even has a big finish, so there. “Wild Animals” is another playful and totally fun tune, and one that kind of rocks. “We was all young once/Real wild animals/When did acting dumb/Stop being so much fun.” Ah, for some people it never ceases being fun, and they join the Republican Party and become Supreme Court justices. Then the next song, “Lead Me On,” opens with the line, “Maybe I’m not as handsome as I used to be.” Ah, a lot of songs seem to touch on aging these days, or perhaps I’m just more aware of that element than I used to be (for no particular reason, I assure you). Anyway, this is a slower, sweeter, more thoughtful number, but still with a wonderfully sad humor in lines like “And she stole my heart/Chopped it up for the parts/And sold it to the boys overseas.”

“Don’t Go Trying To Fix Me” is presented as a duet with Sie Sie Benhoff, and she and Alex sound wonderful together. I recently saw Sie Sie Benhoff perform at the Roots Roadhouse Festival, and totally fell for her voice. I’m hoping to hear more from her. This song has an undeniably sweet sound, but as you might guess from its title, it’s not exactly a sweet song, with lines like “Not a day goes by/You don’t criticize” and “And I can’t change into the person you wished I could be.” Yet, there is certainly love there. It’s a really good song. That’s followed by “Phantom Vibrations,” a cool tune with a bass line that I can’t help but love. “Coming in hot, coming in wild/Making mistakes, but she makes them with style.” And when the song kicks in, there is some nice stuff on fiddle. “Plastic Jesus in the front of the van/Keep me out of trouble the best he can.” The album concludes with “What A Shame,” a sad tale of a once-beloved singer who now struggles as the times change. “The shell of a once-giant soul/The crowds are all gone/And the fans have moved on.”

CD Track List
Warning is scheduled to be released on July 26, 2019.
Posted by Michael Doherty at 6:06 PM