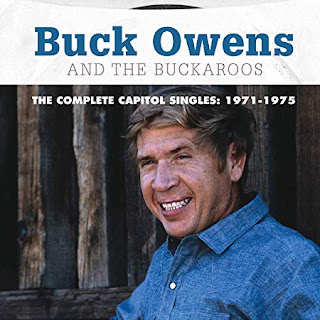 By the early 1970s, Buck Owens was – in addition to being a country music star – a television star, acting as co-host of the program Hee Haw (which ran for a ridiculously long time). And musically he was occasionally dipping into realms other than country, including pop, folk and bluegrass. The Complete Capitol Singles: 1971-1975 collects both the A-sides and B-sides of his singles from this period, which marked the end of his time with Capitol Records (well, sort of – he signed with Capitol again in 1988). This two-disc set also includes liner notes by Scott B. Bomar.

The first disc opens with a cover of Simon & Garfunkel’s “Bridge Over Troubled Water.” Yes, it is perhaps an odd choice for Buck Owens, but I like his rendition. He really goes for it vocally, and gets there. The flip side, “(I’m Goin’) Home,” is good too, featuring another passionate vocal performance. That’s followed by “Ruby (Are You Mad).” When I was growing up, I figured there must be a whole lot of women named Ruby, because that name figured so prominently in music. But the reality is I’ve met only one Ruby (and that might have been in a dream, now that I think of it). Where are all the others? Anyway, “Ruby (Are You Mad)” is one of the bluegrass tunes, and it begins with the vocals delivered a cappella. As you’d hope, there is a lot of energy to this rendition, with some nice work on banjo. But for me, the vocals are really what sell this one. It’s flip side, “Heartbreak Mountain,” is also a bluegrass number, this one an original tune written by Buck Owens. It’s a fun tune, and that stuff on keyboard comes as a surprise, sounding a bit out of place. We also get a delightful bluegrass rendition of “Rollin’ In My Sweet Baby’s Arms,” that banjo whipping along like a joyful maniac. Plus, there is some nice stuff on fiddle. Its flip side is a seriously fun song written by Buck Owens’ son, Buddy Alan Owens, “Corn Likker.” Buddy joins Buck Owens on vocals for “Too Old To Cut The Mustard,” a somewhat goofy tune about aging. Buddy, who was in his early twenties at the time, sings “I used to jump just like a deer/Now I need a new landing gear/I used to could jump a picket fence/But now I’m lucky if I jump an inch.” Buddy also sings on the single’s flip side, “Wham Bam.”

Susan Raye then joins Buck Owens on vocals for “Santa’s Gonna Come In A Stagecoach,” a silly country Christmas tune written by Don Rich and Red Simpson. The flip side is another Christmas song, “One Of Everything You Got,” this one written by Buck Owens, and also featuring Susan Raye on vocals. The song is essentially a list of demands from a young child. These aren’t my favorite tracks, but they are certainly better than a lot of Christmas songs out there. “I’ll Still Be Waiting For You” is sweet song featuring a heartfelt vocal performance and some nice work on pedal steel. I often am surprised by what is a hit and what isn’t, for I think “I’ll Still Be Waiting For You” is a much better song than “Made In Japan,” but it is the latter song that reached #1 on the chart. Susan Raye joins Buck Owens again for “Looking Back To Me,” which is a cute, playful song that I can’t help but like. “I was looking back to see/If you were looking back to see/If I was looking back to see/You were looking back at me.” She also sings on the single’s flip side, “Cryin’ Time.” “Well, my love for you could never grow no stronger/If I lived to be a hundred years old.”

Then the second disc opens with “The Good Old Days (Are Here Again),” and this time it is the A-side. This version is a duet, Susan Raye providing the other set of lead vocals. It’s interesting to compare the two renditions. Both are good, but I prefer the first version. Susan Raye also sings on the flip side, “When You Get To Heaven (I’ll Be There).” That’s followed by “Arms Full Of Empty,” a totally enjoyable song released as a single in the summer of 1973. “Well, I’m so sick and tired/Of getting up so sick and tired/Sick of dirty clothes and dirty dishes.” There is a nice humor to “Songwriter’s Lament,” the single’s B-side. Things get sillier with “Big Game Hunter,” a song about a guy obsessed with football. It has little touches of rock and roll.

Perhaps a country singer wasn’t likely to make the cover of Rolling Stone magazine, so Buck Owens took Shel Silverstein’s song and turned it into “On The Cover Of The Music City News,” and released it as a single in 1974. “Got a big long bus/With a driver named Gus/That shines our cowboy boots/Got a custom-made car/With a built-in bar/And a closet full of Nudie suits.” The flip side, “Stony Mountain West Virginia,” has something of a cool bluegrass vibe. That is followed by a goofy song to add to your Halloween play list, “(It’s A) Monsters’ Holiday,” a tune that mentions Frankenstein’s monster, Dracula, the wolf man, gremlins, zombies and other friendly creatures. By the way, on the back of the CD it is erroneously printed as “(It’s A) Monster’s Holiday.” The flip side to that single is “Great Expectations,” a slower tune with some sweet work on fiddle. That’s followed by a different version of “Great Expectations,” which was released as an A-side a few months later. Its flip side, in turn, is “Let The Fun Begin,” a cheerful number.

“Love Is Strange” might seem another odd and goofy choice for Buck Owens. He does it as a duet with Susan Raye. It’s weird, certainly, but you know, later on Kenny Rogers and Dolly Parton performed it too. So there. And yeah, Buck and Susan do that goofy spoken word part from the Mickey & Sylvia version, though substituting Susan’s name for Sylvia’s. Susan Raye also joins Buck Owens for the single’s B-side, “Sweethearts In Heaven.” The second disc also includes that wonderful rendition of “The Battle Of New Orleans” and its lively flip side, “Run Him To The Round House Nellie (You Might Corner Him There).” The final single of those Capitol years is “Country Singer’s Prayer,” which was also intended to be the title track to Buck Owens’ final Capitol LP. Capitol instead released a greatest hits compilation. But last year Country Singer’s Prayer was finally released through Omnivore Recordings. That disc concludes with “Meanwhile Back At The Ranch,” as does this collection. It’s a delightful, somewhat silly tune, and I like that bass.

Disc One
Disc Two
The Complete Capitol Singles: 1971-1975 is scheduled to be released on May 31, 2019 through Omnivore Recordings.
Posted by Michael Doherty at 3:56 PM