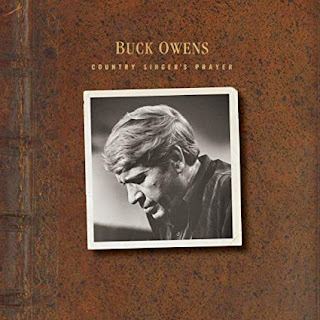 So much of the music I listen to these days is for escape or good cheer, both of which I desperately need to keep from going completely bonkers in the face of the current ugliness of our country. And this classic disc from Buck Owens does the trick. Country Singer’s Prayer had been intended to be Buck Owen’s final album for Capitol in 1975, but the company didn’t release it. Instead, Capitol put out The Best Of Buck Owens, Vol. 6, which did include the song “Country Singer’s Prayer,” as well as “The Battle Of New Orleans,” both of which had been released as singles. Now, after four decades, the album has finally been released, and it is completely enjoyable. It includes two bonus tracks, which are the flip sides to the two singles, as well as somewhat extensive liner notes by Scott B. Bomar. A couple of these songs were included on Buck ‘Em Volume Two: The Music Of Buck Owens (1967-1975), a compilation that was released in 2015.

The album opens with “John Law,” a song written by Homer Joy, and the earliest recording of the album. Don Rich plays on this track (the “big Don” of the song’s first line). The line “And picked up a couple of queens” catches me by surprise. Does he mean what I think he does? Maybe so, as this fun song also includes strippers. This tune urges us not to screw around with the law, so the law won’t mess with us. “Don’t you go give me no innocent plea/‘Cause I know it didn’t happen that way/If you and your friend had been innocent then/You’d be out on the street today.” Well, maybe, and maybe not. That’s followed by “Love Don’t Make The Bars,” a mellower tune written by Robert John Jones. It’s a song that looks back at looking forward, which is interesting, nostalgia for a better future. I think a lot of us can relate to that. Check out these lines: “Now I can’t tell the difference/Between the street lights and the stars/And you don’t find work in pool rooms/And love don’t make the bars.” This is a sad song about a man who missed out on love. Is there anything sadder? And is there anyone who can deliver it better than Buck Owens?

“He Ain’t Been Out Bowling With The Boys,” written by Buck Owens and Robert John Jones, features nice work on both fiddle and steel guitar. This is a song in which a man tells a female friend that her man is not loyal or honest. “Don’t ask him why he never takes you with him/The game he plays you would not enjoy/I hate to have to say it/But you’re going to have to face it/He ain’t been out bowling with the boys.” That’s followed by “Drifting Away,” another song of love gone wrong, but this time to the narrator of the song. This is a gloriously sad country song, delivered with power, and is one of my favorites. I love Buck Owen’s vocal performance, plus the backing vocals over that steady rhythm on bass. “Silence takes over/As pride makes love colder/Ain’t it a shame/No one takes the blame/Love’s drifting away.” Then Buck Owens delivers a ridiculously fun rendition of “The Battle Of New Orleans.” Hell, it begins with fiddle and a jaw harp, so right away you know you’re in for a good time. And there is whole lot of energy and joy to the vocals.

“Country Singer’s Prayer,” the album’s title track, is a mellower tune of thanks. “Those old honky-tonks and one-night stands were good for me/They brought me close to people and they helped me see/That an old guitar can take folks far away from all their cares.” Amen. That’s a reason a lot of people turn to music these days, I’m guessing. Take us far away. This song was written by Jim Shaw and Robert John Jones, and it’s followed by “California Okie,” a song about the children of migrant workers. This one has something of a fun vibe. “A Different Kind Of Sad” is another of the disc’s highlights. It features an excellent vocal performance and some really good lyrics. “Losing you ain’t like the Monday morning blues/It’s like waiting for a train that you know has passed on through/And I’ve seen times when every single bit of luck I had was bad/Losing you, that’s a different kind of sad.” This is an excellent song, and it’s followed by yet another of my favorites, “It’s Been A Long, Long Time.” I love the feel of this one, its sweet and sad sound, and the backing vocals. This one has that steady rhythm on bass, as in “Drifting Away.”  The ending feels rather sudden, premature.

The original album ends (or would have ended) with “How’s Everything,” a song whose first line makes me think of my girlfriend: “I fall in love with her all over every day.” Actually, this entire song is how I feel about her. “And it seems to me she’s always been beside me/It’s like my life before her love was make believe/Rich or poor, it doesn’t matter/Because she’s mine for all the time/When people ask, ‘How’s everything?’/I just say, ‘She’s fine.’” But don’t tell her that, because she’ll say I’m being corny or sappy. Then we get the two bonus tracks, the flip sides to the singles. The first is “Run Him To The Round House Nellie (You Might Corner Him There),” which – as you might guess from its playful title – is a goofy, enjoyable song. This song has a delightful innocence. “Up the hills and down the valley, running for his life/And if Willie don’t watch his Ps and Qs he’s going to wind up with a wife.” This song was written by Buck Owens and Dennis Knutson. Then “Meanwhile Back At The Ranch,” the CD’s closing track, is another fun, rather silly, delightful country number, featuring a good vocal performance and some nice work on fiddle (that’s Don Rich). I also dig that bass section halfway through. “So hurry back, darling/Your sweet love is spoiling/Meanwhile back at the ranch.”