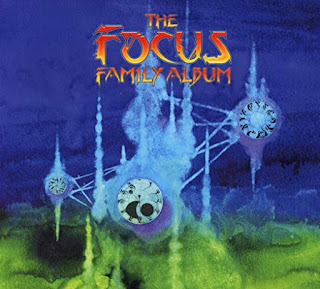 Last year Focus put out a really interesting double album titled The Focus Family Album. It is sort of a compilation, but includes previously unreleased material, including alternate versions, as well as solo tracks. And in these days of people downloading tracks rather than listening to complete albums, I love the care with which this set was put together. The thought that went into the order of the tracks becomes clear once you get into the second disc, and you will certainly get more out of it by listening to these tracks in order. This album follows 2016’s Focus 8.5/Beyond The Horizon, and will certainly keep us occupied until the release of the promised Focus 11.

The first disc opens, somewhat surprisingly, with a flute instrumental piece by Thijs van Leer, his flute backed only by the sound of birds and water. It is pretty and light, and was recorded specifically for this release. That’s followed by “Song For Eva,” which starts with a spoken word section with some really good lines, such as these: “The future cheats us from afar/Nor can we be what we recall.” Of course, there is a very good reason why the lines are so good; they were written by Lord Byron. From there, it becomes a somewhat laid-back and cool jam that takes the listener on a journey. The first time I listened to this album, my girlfriend called me and after a moment asked what I was listening to. “It sounds like yoga music,” she said. I wouldn’t have thought of that, but it makes sense. After all, both yoga and this music push the outside world away, and perhaps cause you to turn inward. That’s followed by a drum solo which also takes you on a journey. Titled “Riverdance,” this is a drum solo that is not about playing as fast or as intricately as possible. Rather, it is to create a certain mood, a certain atmosphere, to create certain images in the listener’s mind, and in that way it reminds me of the work of Bill Kreutzmann and Mickey Hart, particularly in something like The Apocalypse Now Sessions. Anyway, this drum piece evokes images of a hunt, a tribe, and of course a dance.

“Victoria” is a tune that was included on Focus X, and revisited here. This version is a vocal remix and is shorter than the version on Focus X. This song has a beauty, and an uplifting aspect to it, almost a feeling of glory. Then suddenly more than halfway through, the track turns a bit funkier. And then it feels like the two elements combine. That’s followed by “Two-Part Intervention,” an acoustic guitar piece that I love right from the start. It has a light, pretty vibe, and I found myself smiling right away. It’s a short, but absolutely delightful instrumental piece by Menno Gootjes. “Mosh Blues” then has a heavier rock sound, in great contrast to the previous track, a jam with a solid blues groove. The vocals, when they come in (like three minutes into the track), have a wild and raw feel, like scat done by a recent escapee from a lunatic asylum. Yes, I love it. The flute provides an interesting contrast with that heavy blues rock sound.

“Raga Reverence 1” establishes a really nice groove immediately, and then builds on it. They just dig into this groove and explore it and let the music dictate its own direction. This is one of my favorite tracks, and is also a track that was previously released. It was included on Swung’s Vol. 2.  That’s followed by “The Fifth Man,” with the guitar coming on strong to start it with a hard rock sound. It then turns into a pretty good jam. Then “Song For Yaminah” is cool solo bass piece written and performed by the band’s newest member, Udo Pannekeet. The first disc then concludes with “Clair-Obscur,” a tune from the upcoming Focus 11. This one has an interesting feel, mixing moods to create a beautiful and yet uneasy sound.

The second disc, like the first, begins with sounds of nature, with the flute then playing over them, to them, becoming part of them, like sunlight dancing on reeds and leaves. Titled “Let Us Wander,” it’s a beautiful tune by Thijs van Leer. That is followed by “Birds Come Fly Over (Le Tango),” an interesting tune with a nice groove. A different version of this song was included on Focus X. The version here has different vocals, and for me the vocals are one of the main draws of this track. I seriously dig these vocals, particularly when he dips low, and so I prefer this version. “I see you live your life/But in my heart I’ve often seen you cry.” What an unusual line. Rosalie Peters wrote the lyrics for this one. Then, partway into this song, it suddenly picks up steam to become a wild, energetic jam. “And if you lose your love/You lose your life/I’m only waiting for the time to pass.”

It’s interesting how the two discs are arranged in a similar manner. The third track here is again a drum solo by Pierre van der Linden, though this time the images that are conjured are different. For me, they are of fire, at first somewhat contained, but then as if arising or bursting from a volcano. Then we’re lifted from that strange place with “Santa Teresa,” which has a positive and wonderful sound. “Santa Teresa/Enamorada.” I especially love the instrumental section led by the flute. As on the first disc, the fifth track is an acoustic guitar piece written and performed by Menno Gootjes. There is something truly pretty about this track, and it’s among my favorites. It’s followed by another of my favorites, “Fine Without You,” a wonderful bluesy tune with soul and a nice groove. It features Jo de Roeck on lead vocals, and Thijs van Leer delivering yet another excellent lead on flute.

“Raga Reverence 5” is another track from Swung’s Vol. 2. This one has a kind of punk feel to the bass, which I totally dig. I’m excited about where it might take us. The track becomes more of a rock number, building and building, the electric guitar flying over that insistent groove and rhythm. Then “Five Fourth” has a mellower feel to start, but this one builds too. That’s followed by another of the disc’s highlights, “Anaya,” a tune from Udo Pannekeet. I love this one right from the start, beginning as it does with some catchy work on bass. It becomes fun, even if it feels like an unfinished piece. The second disc, as the first, concludes with a tune from the Focus 11 sessions. This one, titled “Winnie,” has a somewhat dark vibe, like a haunted grandfather clock in a fairy tale. When the flute takes the lead spot, the tone changes a bit. By the way, this track and a few of the others get their names from the names of family members of the band, adding more significance to the two-disc set’s title.

The Focus Family Album was released on September 1, 2017.
Posted by Michael Doherty at 11:15 PM