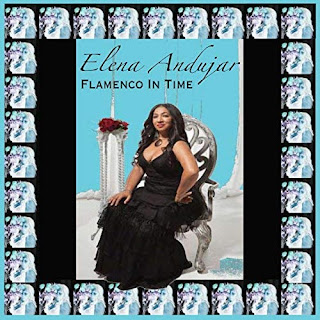 Elena Andujar is a singer who was born in Seville and trained in flamenco dance before turning her focus to singing. She now does both, and even trains others in flamenco dance. Flamenco In Time combines two distinct worlds, that of flamenco and that of dance clubs. It’s an interesting combination, but it is Elena’s voice that is the most compelling element here. Joining her on this release are Matt Warren on drums, Frank Schabold on bass and keys, Bruce Gomez on guitar, Adam Kucharzyk on guitar, Ron Haynes on trumpet, and Antonio Andujar (Elena’s son) on backing vocals.

Sometimes I just want music to transport me to another land, another world, and this CD’s first track, “Una Vez Más,” does just that. Sure, it helps that the lyrics are in another language, but that is only one of the factors at work here. The music is gorgeous, but also is something you can dance to, and features some really delicious work on trumpet. There is also some absolutely wonderful work on guitar over that good pop beat. But again, the main draw of this song is Elena’s strong vocal performance. Elena Andujar also wrote the song’s lyrics. “Porque tu alumbras mi camino/Quiero caminar contigo una vez más.” That’s followed by a cover of “Fever.” I did not like when Madonna did that techno pop version of “Fever.” She somehow lost the sexiness that I had, until that moment, thought inherent to the song. It was the only version of that song I ever disliked. Elena Andujar takes a similar approach on this disc, but for some reason that approach doesn’t bother me here. Perhaps being sung in another language distances this recording enough from what we know and love of the song right from the start that then we are able to listen to it more openly. I’m not sure. There is some more nice work on trumpet, which helps too, and I actually dig the jam toward the end. A portion of the song toward the end is in English.

This electronic beat of “El Despertador” on its own would do nothing for me, but the way Elena’s voice rises above it somehow makes the whole thing more interesting than it otherwise would be. I’m really impressed by her voice.  It takes what could be an ordinary club sound to an extraordinary place. And toward the end, there is more wonderful work on guitar. A second version of this song is included, and the beat is heavier here, more prominent in the mix, and so we lose some of the power of the vocals. I prefer the other version for that reason. Her voice is the main draw. Likewise, the great guitar work is buried a bit by this thumping beat. That’s followed by “Es Asi/What It Is,” and Elena’s voice rises from the dance floor to address the heavens, to invoke the gods who are eager to appease her. And we are all showered with fun dance grooves, and exciting work on guitar. Things fall apart a bit toward the end, but no matter. The second version of this song is much more strongly in the dance realm, and as such is not quite as interesting to me. Also, it contains nods to Aretha Franklin’s “Rock Steady” (“What it is, what it is”).  The CD then concludes with a third version of this song, this one with a heavier beat.