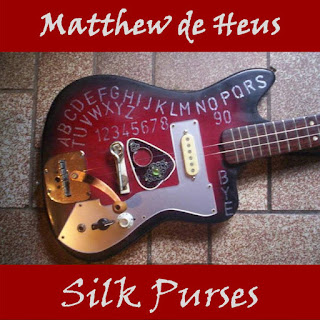 The first thing that strikes me about Silk Purses, the new album from singer and songwriter Matthew de Heus, is Matthew’s voice. There is some authority to it – a strange, haunted authority when he tells us, “It’ll never be the same around this town,” the first line of “Never,” the disc’s opening track. This is a song I can relate to because of lines like “I’ll never be a rich man or a king.” For a long time, I believed I would be. Didn’t we all? Not a king, mind you, but having some degree of wealth. But that optimism – like a lot of optimism these days – has died. When Matthew says “Never,” I believe him. It is the depth of his voice, coupled with the way he delivers the line, that makes it feel so final. But then the sax comes in, offering some comfort. That is J Blum on saxophone (Matthew de Heus and J Blum also perform together as Catfood Sandwich). “I never thought I’d dance upon your grave/I’m not here in anger/I thought you could be saved.” Silk Purses, by the way, is the second album released by Matthew de Heus, following 2016’s Town & Country. It features a mix of covers and original material. “Never” is an original song, written by Matthew de Heus. That’s followed by another original, “Bitter Rain.” The rhythm guitar has a brighter sound from the start, and there is a more upbeat feel, even as he tells us “I’ve always been a fan of the dark side of town.”

The album’s first cover is a very cool, kind of sly, sexy rendition of Dead Or Alive’s “You Spin Me Round (Like A Record),” here titled “You Spin Me Right ‘Round.” It’s quite a bit different from the original, and right now I’m thinking it’s better. It’s darker, and that horn is perfect. That’s Jacob Wisenbach on trumpet. This rendition has such a great vibe, and is one of my favorite tracks. It’s followed by “Fly,” an original tune that has kind of a cheerful pop sound that is totally working for me. Andy Reed delivers some nice stuff on both keys and bass. Then Matthew gets back into cover material with John Denver’s “Poems, Prayers And Promises.” Yes, Matthew de Heus clearly draws inspiration from quite disparate musical sources and realms. This song has always made me both optimistic and somewhat sad, as it is about looking back rather fondly but also looking ahead at death. “The days they pass so quickly now/The nights are seldom long.” Matthew de Heus gives us a really good, thoughtful rendition, and it’s having a strong effect on me. Perhaps that’s partly because death has been on my mind lately. Death is in the air these days – and not just of famous musicians and people we’ve known. We’re also looking at the death of democracy, the death of intelligence, the death of grammar, of coherent sentences, of truth. “And what about tomorrow?”

Matthew de Heus then picks us up with a straightforward rock song, “Like A Song,” featuring Scott Van Dell on guitar. He follows that with another original composition, “Let The Song Speak,” a song that looks back at teenage years. The line that always stands out for me is “Having no comparisons, I thought it was love.” Yes, when we were sixteen, what constituted “love” was quite a bit different from what I now know is love. This track features some nice work by J Blum on mandolin, giving it a cheerful sound. (How many instruments does J Blum play?) That’s followed by a cover of “America.” This is one of my favorite Simon And Garfunkel songs, and the one that most often gets in my head. There are lines in this song that sometimes bring tears to my eyes, such as “Kathy, I’m lost, I said, though I knew she was sleeping/I'm empty and aching and I don't know why.” This song has a different feel these days, doesn’t it? Less hopeful. I mean, can any of us hope to find America anywhere now?

The album then takes another interesting turn, this time to the land of Sinatra with a cover of “Fly Me To The Moon,” written by Bart Howard. This is a cool rendition, with a strong bass line by Allison Scott, and when the trumpet comes in, it is glorious and appreciated. The trumpet is followed quickly by saxophone, and then by some delicious work on guitar, each instrument taking its turn, having its say, because we are in the wonderful land of jazz now. Jacob Wisenbach is on trumpet, Michael George is on saxophone, Scott Van Dell is guitar, and Andy Scott is on drums. We then go back to rock with “She Makes A Sound,” which has a wonderfully positive vibe. “She makes a sound/Sound like a love song.” The final cover of the album is Leonard Cohen’s “Traveling Light,” a song from his final studio album, You Want It Darker. It’s a seriously cool song, and this rendition features Michael Robertson on both mandolin and guitar. I just want to immerse myself in the world of this song, to say goodbye to everything else and travel light in a place where nothing is needed. There was never a better songwriter than Leonard Cohen, and I am so thankful that I was able to see him in concert several times. Silk Purses concludes with “Last Train To Anywhere,” another of the disc’s highlights. Matthew de Heus sings, “We started this trip without any sense of direction,” but this song has a sense of possibilities, and that is something. There is an optimistic feel to the music, a great way to leave us.