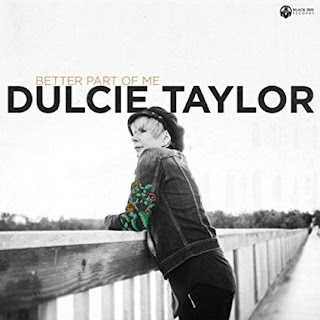 Dulcie Taylor is a singer and songwriter from South Carolina, now based in Arroyo Grande, California. Her latest release, Better Part Of Me, features all original material, with all but one of the tracks written or co-written by Dulcie Taylor. (Interestingly, it is the title track that was not written by her, but more on that in a bit.) In addition to providing the vocals, Dulcie plays acoustic guitar, dulcimer and percussion on this release. Joining her are George Nauful on guitar, piano, bass, percussion and vocals; Damon Castillo on guitar, bass and backing vocals; Joey Landreth on acoustic guitar and electric slide guitar; Dominic Castillo on electric slide guitar; Abraham Robles on drums and percussion; Tracy Morgan on drums and percussion; Kristian Ducharme on organ and piano; Dylan Johnson on upright bass; Cameron West on bass and drums; Erin Snedecor on cello; Bob Liepman on cello; Tyson Leonard on mandolin; Valerie Johnson on backing vocals; and Peter Whitfield and Realstrings on string orchestration.

The album opens with “Used To Know It All,” in which Dulcie Taylor sings “Up to my neck in uncertainty/Ignorance is bliss/Lord, I sure do miss/When I used to know it all.” I know the feeling. These days nothing makes sense. The train has gone off the rails, and people are not just ignorant, but stupid. (Have you tried to hold a conversation with a Trump supporter? It’s like they’ve been living on a completely different planet, a horrible place that has now collided with our world.) Dulcie has one of those fantastic voices seemingly custom-made for country and folk music, though this song is also a bit of blues. Here are some lines I need to keep in mind these days: “Help me to remember it’s all about love/And forgiveness, and let that be enough.” “Used To Know It All” is followed by “God Did Me A Favor,” which has a sweet, pleasant, loving vibe. This song seems the natural follow-up to “Used To Know It All,” because here it really is all about love, just as she said. “At first, you were hard to trust/Because I had just about given up/I was ready to run/Now look what you’ve done/You put the song in my soul/You put the beat in my heart.” Nice, right? This album features a lot of good lyrics, like these lines from “Watch Me Hurt”: “But you don’t trust love/Trouble’s what you want.” “Watch Me Hurt” is one of the album’s most intriguing and effective songs. “I know you broke my heart on purpose/You needed to watch me hurt.”

My favorite track is “The Moon Is Cold,” a beautiful folk song that grabbed me, with Dulcie Taylor’s intimate, quiet delivery pulling me in close. And, like all of the songs on this album, this tune features some really good lyrics. Check out these lines: “Deceit has many faces/It can even look like love” and “The moon is cold and has no light/It mirrors the sun when it shines in the night.” Then the first line of “I Do” is “Everybody gets scared sometimes.” Sometimes? It’s nearly a constant state in these days of unhinged, demented and thoroughly stupid leaders. First thing we do each morning is get online to see if the country still exists. But this song is not about any of that, don’t worry. It’s actually a comforting, soothing promise that we’re not alone. “You don’t ever have to wonder who/Has got your back, I promise you/I do.” Ah, just having one person say that to us – and mean it – can pull any of us through, right? “Whatever comes down the road/We’ll face together, you won’t be alone.”

The next song, however, is about our current troubles – at least our environmental ones. “Halfway To Jesus” addresses climate change, a serious and terrifying problem (and anyone who denies climate change should be smacked across the face over and over until he or she comes to his or her senses). The phrase “Halfway to Jesus” here means halfway to death. “The polar caps are melting/Hear them cracking on the wind/Like the sound of distant gunfire/In a fight no one will win/We’ve only got this one world/We’re all here together/If we want to keep on sailing/We’ve got to fix it, now or never.” This song feels particularly appropriate today, as yet another storm batters us. I dig the intense instrumental section in the second half of the track. And remember: “It ain’t like we haven’t been warned.” “Dove Crying In My Window” has a somber, sad tone. The album then concludes with “Better Part Of Me,” the album’s title track and the one song that Dulcie Taylor did not have a hand in writing. This one was written by George Nauful. Lines like “Things you can’t deny are true” and “In a world full of illusions” feel so apt these days, don’t they? This song has a kind of subtle power.

CD Track List
Better Part Of Me was released on March 9, 2018 on Black Iris Records.
Posted by Michael Doherty at 2:55 PM