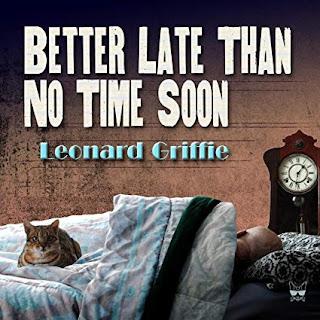 The country has the blues, and sometimes blues music is the very thing to combat that. Leonard Griffie’s latest album, Better Late Than No Time Soon, could be the thing to lift you up, for a lot of this music is fun and features horns. The album contains all original material, written or co-written by Leonard Griffie. Joining Leonard Griffie on this album are Doug McAlister on bass, Mark Stever on drums, Michael Vannice on piano and organ, Gordon Greenley on saxophone, and Randy Scherer on trumpet. Leonard Griffie is based in Oregon, yet none of these songs are about the rain (something that eventually got me down when I lived in that state). They are about relationships and money (or a lack thereof), and are songs that should appeal to a whole lot of folks.

The album kicks off with “Look Me In The Eye,” a delicious blues tune with a good, catchy groove and some wonderful work on guitar. Plus, there are all these great touches on horn throughout the song. It’s a song about dishonesty. “Don’t you look away/I put my faith in you/Right up ‘til today.” And of course these days these lines stand out: “For once in your life/Try and tell the truth/You might be surprised/What it can do for you.” Then “I’m Not Like That” opens with these lines: “I’m not like that/I won’t mistreat you/I won’t do a thing/That you don’t want me to.” It’s sad that we might need to assure someone of something like that, but the world has gone sideways. Lots of people have been hurt, even damaged, and everyone wants to feel loved and safe. It’s a love song for our twisted times. I dig the bass line, which has a cheerful vibe, and there is some nice work on guitar as well.

“I Got News” has something of a classic sound, which I love, and features some good stuff on horn. This is a song announcing the end of a relationship. “I’ve got news/I’ve got some news/I’m through with you.” Ah, we’ve all had relationships that we just wanted to sing about ending, perhaps that we did sing about ending. And if you’re in that sort of situation right now and need a song, well, here it is. It features one of the album’s best vocal performances. “What You Got Is What You Get” is one seriously fun and vibrant track, with prominent horns and some nice work on drums. “Go out, looking good in that brand new dress/While I sit over here, my old clothes all in a mess/Well, this ain’t working from where I sit/So what you got is what you get.”

“I Do Love You” is a blues love song with a delicious groove. “When you love somebody, only the truth will do/And I do/Oh, I do/I do love you.” Well, I say that only the truth will do in all circumstances. I know, it’s a crazy idea, particularly in these days when we suffer with a mendacious leader. Anyway, I love the feel of this song, and it’s one of my favorite tracks. “You’re on my mind, whatever I do/Ain’t a minute goes by that I don’t think of you.” Then “Goin’ Downhill” starts with one of those perennial blues subjects – being left by a woman. But it’s also about aging and slowing down. “I’m heading downhill faster than I want to be.” That line makes me laugh, though part of that laughter is due to my relating to its message. Another line that makes me laugh is “Brakes ain’t stopping this old Cadillac.” It’s an unexpected metaphor, but I also love that there is a bit of bragging in a line about his own decline. After all, he isn’t calling himself a Ford Pinto. I love this song’s rhythm, which works to bring a smile to my face, even as it reminds me that I am facing my own impending demise. We all are.

“Ain’t No Happy Home” also has a great groove, though it’s about loneliness, its main lines being “There ain’t no happy home/When a man’s all alone.” But he’s trying to do something about it, asking “What’s it going to take to keep you there with me?” The horns tell me things are going to work out just fine. That’s followed by a cool instrumental track titled “Up And At ‘Em,” a nice little jam with some good stuff on organ, and then by the album’s title track, “Better Late Than No Time Soon,” which has an easygoing rhythm and features more good work on keys. “Oh, I’m pretty sure there’s honey in my spoon/Know what I say/Better late than no time soon.” The album concludes with an instrumental track, “I’m Good Where I Am.”