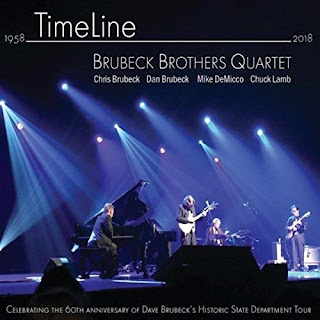 If memory serves, the first jazz album I ever got was Dave Brubeck’s Time Out. It was a present from an uncle who clearly thought I was cooler than I was. Then when I listened to it, I completely loved it. That album was originally released in 1959, a year after Dave Brubeck’s important State Department goodwill tour, a sort of brilliant cultural diplomacy program in which Brubeck and his band traveled to places like Turkey, India, Pakistan, Iraq, Iran, Afghanistan and Poland. TimeLine, an album by the Brubeck Brothers Quartet, celebrates the sixtieth anniversary of that tour, and the music that the tour inspired Brubeck to write. In addition to music written by Dave Brubeck, the album contains several original pieces. The Brubeck Brothers Quartet is composed of Chris Brubeck on bass and trombone, Dan Brubeck on drums and percussion, Mike DeMicco on guitar, and Chuck Lamb on piano.

The album opens with “Blue Rondo A La Turk,” the tune that also opens Time Out (and so the first Dave Brubeck number I ever heard). This version has quite a different beginning from that earlier version, kicking off with percussion. And then that familiar piano part is broken up by percussion several times, creating an interesting effect. This rendition has teeth, has an edge, and has energy that grabs you. Then it gets into that groovy section, with the other part interrupting at first. There is some delightful stuff on both guitar and piano here, before the track relaxes a bit for a cool bass lead. This is an excellent rendition from start to finish. It’s followed by “Far More Blue,” a tune from Dave Brubeck’s 1961 release, Time Further Out. This begins as a mellow, more relaxed journey, but then picks up energy (more than the original version), and features another nice lead on bass and some excellent work on percussion. As much as I always loved Dave Brubeck’s work on piano, one of the first things that I found appealing about his music was the fantastic and complex work on drums that accompanied him. And this rendition features some absolutely delicious work on percussion, which is what makes this track something special for me.

“Easy As You Go” is a pretty tune, even without Carmen McRae’s vocals. This track features some beautiful work on horn. That’s followed by “Since Love Had Its Way,” a fun, cheerful and playful tune featuring some wonderful work on guitar that just seems to flow naturally, and another cool lead on bass (and is that a bit of scat in the background, like singing along to the bass?). Both “Easy As You Go” and “Since Love Had Its Way” were part of the musical The Real Ambassadors.

The first of the album’s tracks not written by Dave Brubeck is “Boundward Home,” composed by pianist Chuck Lamb. This one feels like setting out to unknown places, and features more good work on drums. That’s followed by “Tritonis,” an interesting choice, as it was from quite a bit later in Dave Brubeck’s career. It was the title track from a 1980 album. It has an interesting groove and some wonderful work on piano. I particularly love the ending here. We then return to the late 1950s for “The Golden Horn,” a tune from the 1958 album Jazz Impressions Of Eurasia, which the Dave Brubeck Quartet recorded right after that famous tour. This is my personal favorite track on this disc. It gets off to a fantastic start with the drums, and then the guitar is bloody great. Of course there are interesting changes, entering into a cool, sly section, like the tune is crouching, getting ready to pounce. That guitar just starts flying again. The entire band cooks here, delivering a track that is absolutely wonderful.

We then get into more of the original material. The second original composition on this release is by Chris Brubeck, “3 Wise Men,” a seriously cool tune that conjures images of the desert and is another of the disc’s highlights. That’s followed by “North Coast,” written by guitarist Mike DeMicco. This one has a good, solid vibe and features some joyful work on guitar. Then “Prime Directive,” written by Chuck Lamb, is fun right from the moment it starts. It has such a bright, positive vibe, and plenty of great playing. I particularly like the work on piano. And toward the end the horn adds another glorious element to this already-excellent track. The album then concludes with Dave Brubeck’s “Thank You (Dziekuje),” another tune from Jazz Impressions Of Eurasia, this one inspired by Chopin. It’s a gorgeous piece, and includes more good work on horn, a nice way to end the album.