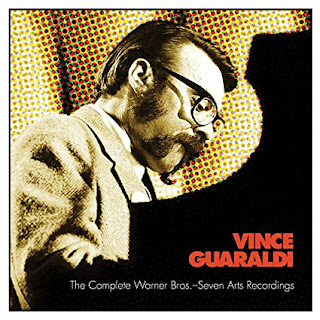 When you’re compiling a list of the most joyful songs ever – as I am sure everyone is wont to do now and again – one tune you’d certainly include (unless of course you’d gone temporarily insane) is Vince Guaraldi’s “Linus And Lucy.” This song feels like pure joy, with innocence and determination. And that is the song that opens The Complete Warner Bros. – Seven Arts Recordings, the new compilation of Guaraldi’s work. This two-disc set includes three complete albums, as well as several previously unreleased tracks. There are also new liner notes by Derrick Bang.

The first disc contains two complete albums – 1968’s Oh, Good Grief! and 1969’s The Eclectic Vince Guaraldi. On both of these, Vince Guaraldi plays electric harpsichord as well as piano. Oh, Good Grief! is, as you might guess from the title, made up of music for the Peanuts cartoons. All of the tracks are originals, written by Vince Guaraldi. As I mentioned, it opens with “Linus And Lucy,” one of Guaraldi’s two most famous compositions. This is the one people usually think of when they think of the Peanuts Theme. And this is an excellent version, lively and totally enjoyable. It’s followed by “You’re In Love, Charlie Brown,” which feels like a strange and magical amusement ride, something that is fun and light, and also loving and gentle. “Peppermint Patty” is one that perhaps isn’t as known and beloved as some of the other Peanuts themes, but I am kind of crazy about it. Peppermint Patty was my favorite character when I was kid, so that might be part of it. This track becomes a kind of intense late 1960s jam, which is wonderful. Then “Great Pumpkin Waltz” comes in great contrast, its delivery more traditional and sweet. Still, there is some really good stuff on guitar.

Joy simply abounds in “He’s Your Dog, Charlie Brown” (which, as explained in the set’s liner notes, had been previously incorrectly titled “It’s Your Dog, Charlie Brown”). There is something comforting about this music, which, sure, might be partly due to my having first fallen in love with it when I was a child. The title track, “Oh, Good Grief!,” has a delicious Brazilian vibe. Geez, how cool were children’s television specials back then? I guess I’m lucky to have grown up when I did (though I assume they’re still showing these cartoons to kids, or at least I hope they are). One of the best tracks is “Red Baron.” It contains little nods to “Linus And Lucy,” but goes in a widely different direction, and is completely enjoyable. Oh, Good Grief! then concludes with “Rain, Rain Go Away,” a pretty and relaxing tune that begins with wonderful stuff on piano and also features some interesting, cool work on guitar.

The Eclectic Vince Guaraldi album then begins with “Nobody Else.” Immediately, you’ll notice a difference in the sound for this album, with the presence of strings. Another major difference is that most of the tracks on this album were composed by other people. “Nobody Else,” however, is one of the exceptions. I like some of the work on strings, and some of it I don’t care for, but I love Vince Guaraldi’s piano part. That’s followed by “Lucifer’s Lady,” a cool tune. To me at the beginning the piano sounds like it’s delivering an amped up version of The Classics IV’s “Spooky.” This one is all about the piano, and the piano is all about laying down a good groove and then at certain points exploring the areas around it, which I totally appreciate (although it might go on a bit longer than necessary). This track also features some good stuff on guitar.

We then get into the cover material, beginning with Tim Hardin’s “Black Sheep Boy,” which features vocals by Vince Guaraldi, and strings. This is the first of two Tim Hardin songs included here, the other being “Reason To Believe,” which is also the only other track to feature vocals. “Back Sheep Boy” is followed by a gentle, pretty rendition of Jobim’s “Once I Loved” and then by a strange rendition of Sonny And Cher’s “The Beat Goes On,” which feels rather pointless and repetitive. We then get a romantic rendition of “Yesterday,” featuring strings, followed by the final of the album’s original tracks, “Coffee And Doe-Nuts.” There is a kind of sweet chaos about this number, and I like it. There is also a bass solo, as well as some nice work on drums toward the end. The album concludes with “It Was A Very Good Year,” a song written by Erwin Drake and most famously recorded by Frank Sinatra. This is a good version; it goes in some interesting directions.

The second disc includes one complete album, Alma-Ville, as well as the bonus material. It actually begins with the bonus tracks, as they were recorded before Alma-Ville. There are four bonus tracks, none of which were previously released. The first is a cover of “Do You Know The Way To San Jose,” written by Burt Bacharach and Hal David, and made famous by Dionne Warwick. This is actually a really enjoyable rendition, developing a good groove and a lively vibe, with some delicious stuff on guitar. That’s followed by an alternate take of “The Beat Goes On.” This is quite a bit longer than the album version, allowing you to really sink into the groove, but not offering much else. We then get a cover of Edwin Hawkins’ gospel song “Oh, Happy Day.” The last of the bonus tracks is the only original composition among them, “The Sharecropper’s Daughter,” a rocking, fast-paced number, with a bit of a late 1960s psychedelic flavor which I love.

Alma-Ville then kicks off with “The Masked Marvel,” which is an original composition, as are most of the tracks. It has a steady groove, and features some wonderful and playful work on both piano and guitar. That’s followed by one of the album’s few covers, “Cristo Redentor,” written by Duke Pearson, with Guaraldi adding a sense of cool to this meditative tune. Partway through, it suddenly changes, taking on a livelier feel. Then “Detained In San Ysidro” has a light, kind of fun sense about it, and is an enjoyable tune. On The Eclectic Vince Guaraldi, Guaraldi covered The Beatles’ “Yesterday,” and on this album he gives us a good rendition of “Eleanor Rigby,” featuring some great work on guitar. “Uno Y Uno” is kind of an odd one, driven by guitar (Vince Guaraldi plays guitar on this track). “Alma-Ville,” the album’s title track, is a composition that Guaraldi originally included on his 1962 release Jazz Impressions Of Black Orpheus. I like both versions, but the one here is even more fun than the first, with a certain energy and a spring to its delivery. This version does contain the bass and drum solos (I think I prefer the drum solo in the original version). That’s followed by “Rio From The Air,” which, as you might guess, has a strong Brazilian flavor. The final cover on the album is “Watch What Happens.” The CD then concludes with “Jimbo’s,” an energetic tune which had previously been incorrectly titled “Jambo’s.” This one features a whole lot of fun work on piano, particularly in the first half, then some cool stuff on guitar in the second half, and even a good lead on bass.

The Complete Warner Bros. – Seven Arts Recordings was released on July 6, 2018 through Omnivore Recordings.
Posted by Michael Doherty at 11:18 PM